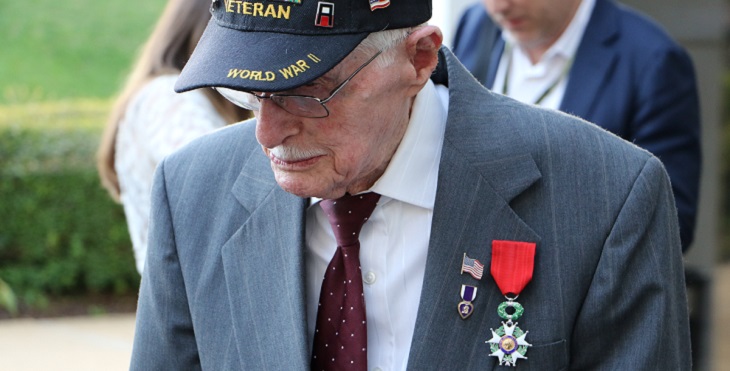 U.S. Army Veteran Donald Keller, from Strasburg, Virginia, received the French Legion of Honor during a special ceremony at the French Embassy in Washington, D.C. earlier this week.

The 96-year old received this honor because of heroic actions during the invasion of Normandy, where he was wounded during a mortar attack at Saint-Lo and helped shepherd two of his fellow soldiers to safety.

Keller was drafted in the U.S. Army on New Year’s Day in 1943. His father, Mackall B. Keller, served in the U.S. Navy during World War I. When asked if it was hard on his father to see his son go overseas to fight in another great war, he said, “it was harder on my mother; she wrote me every day I was gone. I didn’t always get the letters on time, but she always wrote me.”

Training for Keller included a brutal stint in Fort McCoy, Wisconsin, where he had to learn how to survive in the cold for almost 30 days.

Keller deployed to Europe during World War II as a radio operator and was in one of the advances on Omaha Beach during the invasion of Normandy.

“Something people didn’t think about was how rough the seas were,” said Keller. “If you jumped when the ship was too low you would injure yourself on the landing craft; you had to jump off at just the right time.”

Keller was tasked to set up a radio transmission station in Saint Louis. During the task he and other service members went out of the woods and into a clearing; unfortunately that was a mistake.

“The next morning it was rainy before daylight. There were six of us. The Germans dropped mortars and killed one of the men instantly and wounded two others. Two of the other soldiers fled,” said Keller. “Even though I was standing with blood all over my face I was not going to leave them. We were under fire all the way to the field hospital. They were in bad shape, but they were alive.”

The U.S. Army sent Keller back to London for surgery. At first, they said he would finish his tour in London with the Supreme Headquarters Allied Expeditionary Force (SHAEF) led by General Dwight D. Eisenhower. A few months later SHAEF moved to Versailles, so Keller was back in France.

“I had always been a radio operator, but with this new assignment I moved to radio maintenance,” said Keller. “We set up transmitters and receivers six miles apart and the transmitters were in these old horse stables.”

He then deployed to the Battle of the Bulge with a mobile radio unit in Luxembourg, Belgium. He was hit with mortars again and sent back to Versailles before completing his tour and coming back to the states.

Two years ago, Keller’s caregiver, Carole Synowietz, filled out the application for the French Legion of Honor knowing that Keller received two Purple Hearts and was wounded in France. They didn’t know about the Legion of Honor until they took an Honor Flight trip to Washington, D.C.

Synowietz received a phone call a few months ago that Keller had been accepted and was invited to the ceremony at the French embassy. She coordinated the efforts for him and ensured all the paperwork was correct and that they would have transportation. “There was no way I was going to let him miss this,” she said.

Donald Keller displays a photo of him in uniform, a clock from a B-17 that was shot down and his military coins.

The event was larger than anyone in the group anticipated. Upon arrival, they had found out the event was a D-Day Anniversary celebration sponsored by the World War II Foundation. There were almost 500 people in attendance all to honor the five Veterans who were receiving the Legion of Honor.

There were politicians, military leaders and even celebrities in attendance, but Keller was most excited about meeting former Senator Bob Dole, who received a special leadership award from the foundation.

After the Army, Keller returned home to Strasburg, Virginia, and kept working on radio equipment. He started his own business and went to work for and retired from what is now known as the Federal Emergency Management Agency.

He built his own radio transmitter in his basement and has volunteered at the local fire department for almost 20 years.

“It was an honor to attend this ceremony and drive Mr. Keller to this event,” said Rathore. “He deserves this honor for his acts of bravery and heroism during World War II.”

“This means a lot,” said Keller, who was at a loss for words. “I was definitely not expecting all of this. It was very special.

The French Legion of Honor was first established by Napoleon Bonaparte in 1802. American Veterans who served in France or with French forces are eligible to be recognized for their service as Knights of the Legion of Honor.

About the Author: Lauren Winebrenner is a U.S. Navy Veteran and Public Affairs Specialist at the Martinsburg VA Medical Center.