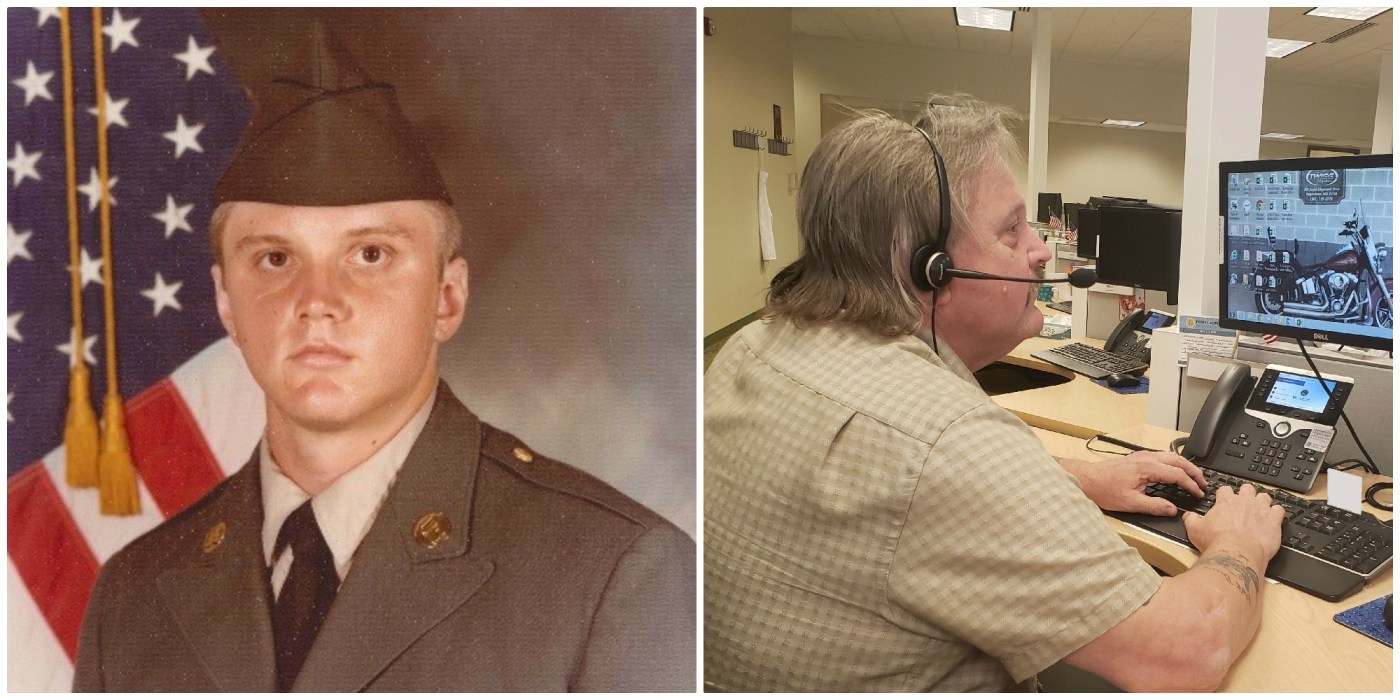 What do you imagine when you call a phone call center? Dimly lit cubicles? Quotas to take another call? Scripted responses? Not at the VA.

The White House VA Hotline is a different kind of contact center. Staffed mostly by Veterans and their family members, contact representatives are encouraged to connect with the caller, get to know them a bit and understand the bigger picture; not just the task at hand. At the White House VA Hotline, staff are not given requirements on how long the call should last and are asked to share resources inside and outside of VA.

When calling the hotline, you may be matched up with Rodney the Seabee. But people who meet him on the street might assume they crossed paths with a real tough customer, with his SeaBee-riding-a-motorcycle tattoo and intimidating posture. However, behind the tough guy persona resides a compassion that Rodney puts to work at the White House VA Hotline. He uses his own experiences as a Veteran to have thoughtful conversations with Veterans and their families.

His experience at the White House VA Hotline led to a change in how he speaks to Veterans that has been adopted by many other contact reps at the hotline.

Rodney had been taking calls for several months when he noticed the standard closing ‘Thank you for your service’ was not always well received.

“Everybody says that,” Rodney said. After speaking with a Vietnam Veteran, he decided to modify his approach.

He now closes calls with, “From one Veteran to another, I want to thank you for the sacrifices you’ve made for our country.” After speaking with a Veteran’s spouse or family member, he also thanks them for the sacrifices they made. Articulating this genuine gratitude made all the difference.

“That word sacrifice means a lot,” Rodney said. He lets the caller know, “Thank you for what you did and what you went through; we wouldn’t be here if it wasn’t for you.”

In early 1979, 17-year old Rodney wanted to join the Marine Corps, but his mother wouldn’t consent. He chose the Army National Guard instead. “That’s when my military journey began,” he said. He served from 1979 to 1982 in the 157th MP unit in Martinsburg, West Virginia. In 1982, Rodney went active duty, joining the Navy as a machinist mate on board the USS Constellation. Rodney enjoyed his Navy experiences, including two West-PAC cruises, but left the service at the end of his contract in 1986.

“From one Veteran to another, I want to thank you for the sacrifices you’ve made for our country.”

Looking for a steady job, Rodney became a truck driver, but the military life beckoned yet again. In 1994, he rejoined the Army National Guard, and in 2000, once again back to the Navy. This time as a Seabee. Rodney loved his time as a Seabee with Naval Mobile Construction Battalion 23 in Fort Belvoir, Virginia.

“I traveled the world and had a great time,” he remarked.

In between and after his military service, Rodney hit the open road as a long-haul truck driver. One of his greatest achievements, tattooed on his forearm, is becoming a Navy Seabee.

But 16 years of service began to take its toll, and Rodney was forced to hang up his uniform for good. He went back on the road, this time as a long-haul trucker.

In 2011, with a failing knee replacement and a diminished ability to drive, Rodney wasn’t sure what to do. So, like most, he went to VA.

Rodney reached out to a VA Vocational Rehabilitation Counselor. He said the counselor was focused on his goals: “She bent over backwards to make sure I was taken care of and moving forward.” After being accepted, he started a degree program in Information Technology and Security Management at American Military University, and graduated in 2017.

After graduating, and as luck would have it, Rodney noticed a job posting for a new hotline with VA. He had a strong urge to show his appreciation for the resources and benefits he had received from VA, so he applied. In September 2017, he was hired and began his advocacy for Veterans with the White House VA Hotline.

Rodney talking with Veterans and their families at the  White House VA Hotline.

At the White House VA Hotline, some calls have affected him more than others. He hesitates when thinking about them.

Late into his shift one evening, he answered a call from a Veteran who was ready to end her life. Rodney listened as she told him about the sexual trauma she had endured in the military and the effects it was having on her life today. He immediately offered to get a counselor from the Veteran’s Crisis Line to join the call, but the Veteran told him she wanted to talk to only him, about what she was going through. By the end of the call they were laughing together. He encouraged her to use the resources provided and to call back whenever she needed–from one Veteran to another.

“That one call made my job worth it,” he said.

Rodney the Seabee is a Contact Representative for the White House/VA Hotline. Launched in 2017, the Hotline provides 24/7/365 service to address Veteran concerns and help them to navigate VA. It is staffed by more than 90 trained customer service representatives, most of whom are a Veteran, military family member, caregiver, or a survivor. The White House VA Hotline provides callers with general information and directory assistance, intakes compliments and recommendations, and transfers to professionals across the VA to resolve issues. The White House/VA Hotline can be reached at 855-948-2311

ICARE Vets Experience Who is VA?