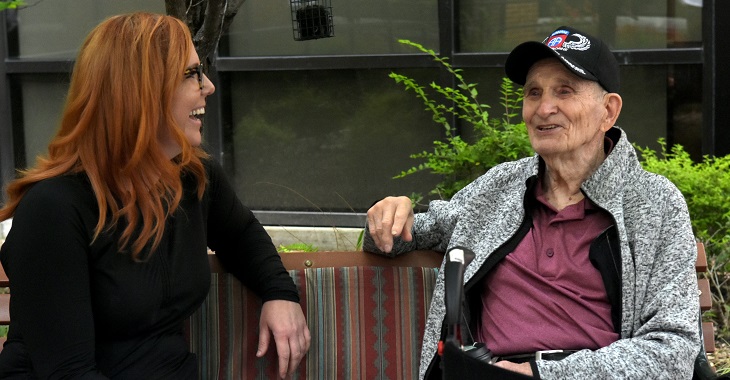 The Greatest Generation is being lost to the unalterable process of aging. Today’s youngest World War II Veteran is more than 90 years old, and fewer than 400,000 of the 16 million American’s who served still survive.

Drafted in 1943, Clifford Stump of the famed 82nd Airborne Division will celebrate his 95th birthday one week after the 75th anniversary of D-Day, a day he experienced firsthand, and will soon relive, as he returns to the shores of France for the first time since he fought their in 1944.

Stump was a U.S. Army Airborne artilleryman operating a ‘British 6 pounder’ as 156,000 allied troops landed at Normandy on June 6, 1944, as part of the largest amphibious military assault in history. Stump fought in campaigns in France, Belgium, Germany and was part of the final push to Berlin in 1945.

Stump is a long-time VA North Texas Health Care System patient with an active fan base. When he visits Dallas VA Medical Center, Stump makes his rounds visiting with employees and his fellow Veterans, schedules appointments, and regales many with stories of our Nation’s history from the first-person perspective.

“It’s humbling to get to know our Veterans, to care for them, and most importantly, to learn from them,” says Lara Easterwood, Physician Assistant with VA North Texas’ Community Living Center.

On his most recent visit to the Dallas campus, Stump shared the news that he’ll soon travel to Normandy, France, to participate in 75th anniversary D-Day events in early June. Stump will also re-visit other locations during the week-long trip–locations he last saw as a 20-year-old soldier, operating in support of his fellow soldiers of the 82nd Airborne and the 156,000 American, British and Canadian forces who landed on five beaches along a 50-mile stretch of heavily fortified coast.

“You think about all the buddies you made over there and you always have to keep them in mind,” said Stump. “I wanted to stay with them and you had to be ready to save them.”

Stump’s trip to Normandy, France and other battlefield locales he last visited 75 years ago is part of the 82nd Airborne Division Association and USAA’s support to honor 20th-century Veterans’ sacrifice before they pass.

About the author: Michael Cole is a VA North Texas public affairs specialist.