Memorial Day: Remembering and honoring those who paid the ultimate price a nation’s freedom 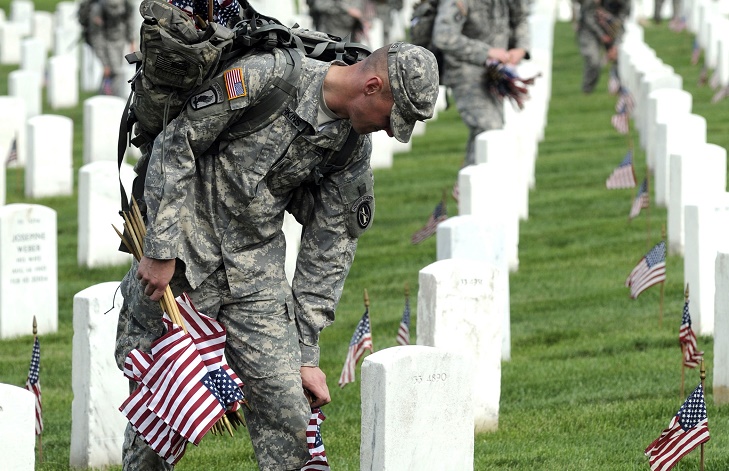 On Memorial Day, as we recognize and honor those who made the ultimate sacrifice, VA takes a closer look at how we memorialize Veterans for their service.

VA’s National Cemetery Administration honors Veterans and eligible family members with final resting places in national shrines as a lasting tributes to commemorate their service and sacrifice to our nation.

Many people may not know that in addition to maintaining 136 National Cemeteries, VA also provides a headstone or maker, burial flag and Presidential Memorial Certificate for eligible Veterans and their families.

Using VA’s popular “America’s Wars” Fact Sheet and other VA data sources, Eddie Thomas, an analyst in VA’s National Center for Veterans Analysis and Statistics, developed an infographic to illustrate the service and sacrifice of America’s Veterans during battle, peacetime and after they left the military.

VA provides memorial benefits to all eligible Veterans, not just those who died while in service.

“We are here for all Veterans, to ensure they get the benefits they have earned,” said Thomas.

Most battle deaths occurred during World War II (291,557), followed by the Civil War (214,938). However, just as many Veterans died during the Civil War from non-battle related causes (283,394). At over 15 million, World War II Veterans make up an overwhelming majority of deaths after military service.

Many of these Veterans, and their loved ones, are buried in one of the 3.7 million gravesites in VA national cemeteries maintained by NCA.  In 2018, NCA facilitated 135,306 interments and provided 364,698 Headstones, Markers, and Medallions, an average of 1,370 memorials per day. NCA maintains 136 national cemeteries, one national Veterans burial ground and 33 soldiers’ lots and monument sites in 40 states and Puerto Rico.

To find out if you are eligible, visit the NCA website.