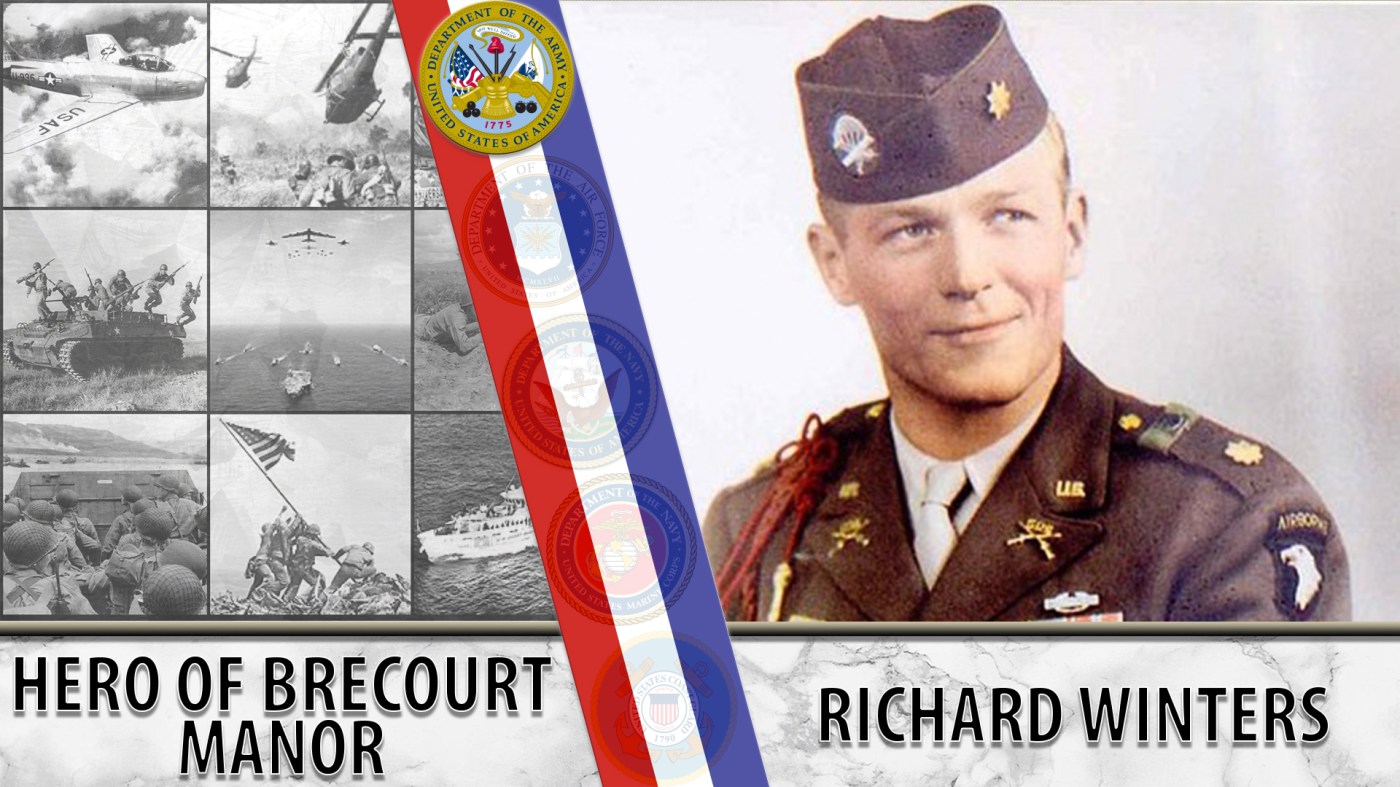 A Veterans Story graphic created by Kimber Garland for the U.S. Department of Veterans Affairs.

Richard “Dick” D. Winters was born in rural New Holland, Pa. in January 1918. Richard graduated from Franklin and Marshall College in 1941 with a bachelor degree in economics. On Aug. 25 of the same year, he enlisted into the Army to fulfill a one-year service requirement. He said he had done this as an attempt to avoid completing a full three-year tour if he had been drafted.

Nonetheless, he reported for basic training at Camp Croft, S.C. In 1942, Richard was selected to attend the Army Officer Cadet School (OCS) in Fort Benning, Ga. Once he completed his time at OCS he was assigned to the 101st Airborne Division commissioned as a second lieutenant. In the 101st, Richard volunteered for the rigorous paratrooper training program and was assigned to Company E, commonly referred to as “Easy Company,” of the 2nd Battalion, 506th Parachute Infantry Regiment, 2nd Platoon, where he was made platoon leader. The regiment was considered experimental at the time as they were part of the first soldiers to be given airborne training. While still in paratrooper training, Richard would receive another promotion, this time to the rank of first lieutenant and assigned the role of executive officer of 1st Platoon. Richard, along with the rest of the 101st Airborne Division, was deployed to England in September 1943 to begin preparing for the invasion of Normandy.

Eventually, this training was put into action and in the early hours of June 6, 1944, Easy Company was deployed alongside the 82nd and the rest of the 101st Airborne Divisions to commence Operation Overlord and the D-Day invasion. During the early moments of this operation, the plane carrying all of Easy Company’s leading officers, who made up the company’s headquarters, was shot down, which left Richard, a first lieutenant, as the acting commanding officer. In the following days, he destroyed a full battery of German howitzers and the platoon that commanded them, as well as acquired key information detailing German defenses at Utah Beach. Richard achieved these feats with only 13 of his men used in the action dubbed, the Brecourt Manor Assault. Richard was recommended for the Medal of Honor and received the Distinguished Service Cross and a promotion to the rank of captain for his actions. He would go on to fight heroically in Operation Market Garden and the Battle of the Bulge. On March 8, 1945, Richard was promoted to the rank of major.

After World War II, he stayed in Europe as part of the occupation and demobilization effort even though he had the option of returning home. Richard was later offered a regular commission, as opposed to his reserve commission, but declined and was discharged Jan. 22, 1946. Upon his return to the United States, Richard would meet and marry Ethel Estoppey on May 16, 1948. In 1951, Richard was reactivated by the Army and trained infantry and Army Rangers at Fort Dix, N.J.for three more years. He then moved to Hershey, Pa. with his family and founded his own company, R.D. Winters Inc., which sold feed for livestock to Pennsylvania farmers. After retirement, he would speak with historian Stephen Ambrose who would turn his stories into a book named Band of Brothers in 1992. In 2001, actor Tom Hanks adapted that book into an Emmy winning HBO miniseries. Richard would go on to publish his memoirs and give public speeches. Richard passed on Jan. 2, 2011 in Campbelltown, Pa.