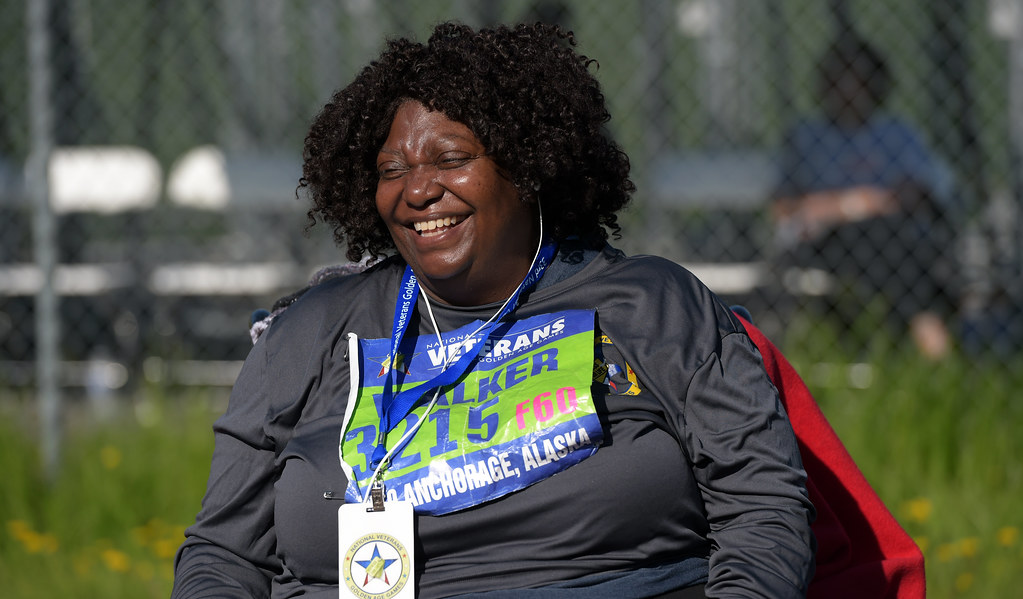 Navy Veteran Angela Walker is competing in the National Veterans Golden Age Games for the third time. She’s in five activities in the ongoing VA sports event in Anchorage, Alaska.

At the same time, Walker admits that participating in the Golden Age Games isn’t easy. She’s been in a wheelchair for six years and has chronic pain throughout her body. Even a sport like archery, where one has to pull the bow and hold the arrow, triggers pain from her navel down, she says.

Yet, she perseveres, knowing there’s a therapeutic component to the games. One of the best things about the games is that “you learn how to turn off the pain a little bit and dial it down while you’re competing,” as she put it.

“I’m never without pain,” Walker says. “I can’t remember the last time I haven’t had pain all day. (It) makes it really challenging to play. But you have to push through in order to play. You might see the tears coming down. But I don’t like to quit unless I absolutely have to. It happens with every sport. So it’s kind of like, should I go to the games or not go to the games? I want to win, and I want to play, and I don’t want to quit.”

She finds it encouraging and inspiring to be among other Veterans who are in wheelchairs. She’s competing in the wheelchair division of air rifle, horseshoes, boccia, bowling and shuffleboard.

“I’m motivated because everybody is doing their best using whatever skills and strength they have to win and to have a good time,” she says. “We’re all aware of what’s going on with our bodies. But doing my first Golden Age Games [in 2017] just let me know that, `Hey, you don’t have to just sit at home. You can do other things.’ So I’m taking my body to the limit in trying to do all of these different sports.”

Her determination is paying off. Competing in the 60 to 64 age category at this year’s games, she’s thus far won gold medals in boccia and horseshoes. She also earned three medals at both the 2017 Golden Age Games in Biloxi, Mississippi, and at the 2018 Golden Age Games in Albuquerque, New Mexico.

Walker’s success at the 2018 games qualified her for the National Senior Games in Albuquerque from June 14 to June 25. The foundation for the games selected her to receive the Hurford Memorial Award that provides some financial assistance to attend. In the nationwide event, she’ll test her skills in the wheelchair division of bowling and horseshoes.

If not for a chance encounter with another Veteran who competes in wheelchair sports, Marine Corps Veteran Johnny Baylark, Walker may not be competing. The two met several years ago at Naval Station Great Lakes outside of Chicago. Baylark encouraged Walker to come out for the VA sports event.

“I was looking for a parking space, I thought he was getting out, and I was going to take his space,” Walker remembers. “We both left our vehicles. He approached me and said, `Hey, you’re in a wheelchair. You should do bowling.’ I was like, `Bowling, I don’t know about bowling.’ But it made me think. So I talked to my doctor and he agreed that I should get involved.”

Walker has since tried to influence other Veterans to take part in the National Veterans Golden Age Games. She volunteers as a motivational speaker and sings regularly at the Captain James A. Lovell Federal Health Center in Illinois and at Veterans’ organizations, such as the American Legion. An accomplished singer, Walker has won gold medals at the National Veterans Creative Arts Festival & Competition, another VA-sponsored event.

In front of a waving Red, White, and Blue, she gracefully sang the “The Star Spangled Banner” before the start of Friday’s horseshoe event. At one point, Daniel Dela Cruz, coordinator of the horseshoe competition, remarked to Walker that “this is harder than it looks. It’s not easy.”

Walker knows all about that. But it seems that nothing will derail her drive to compete.