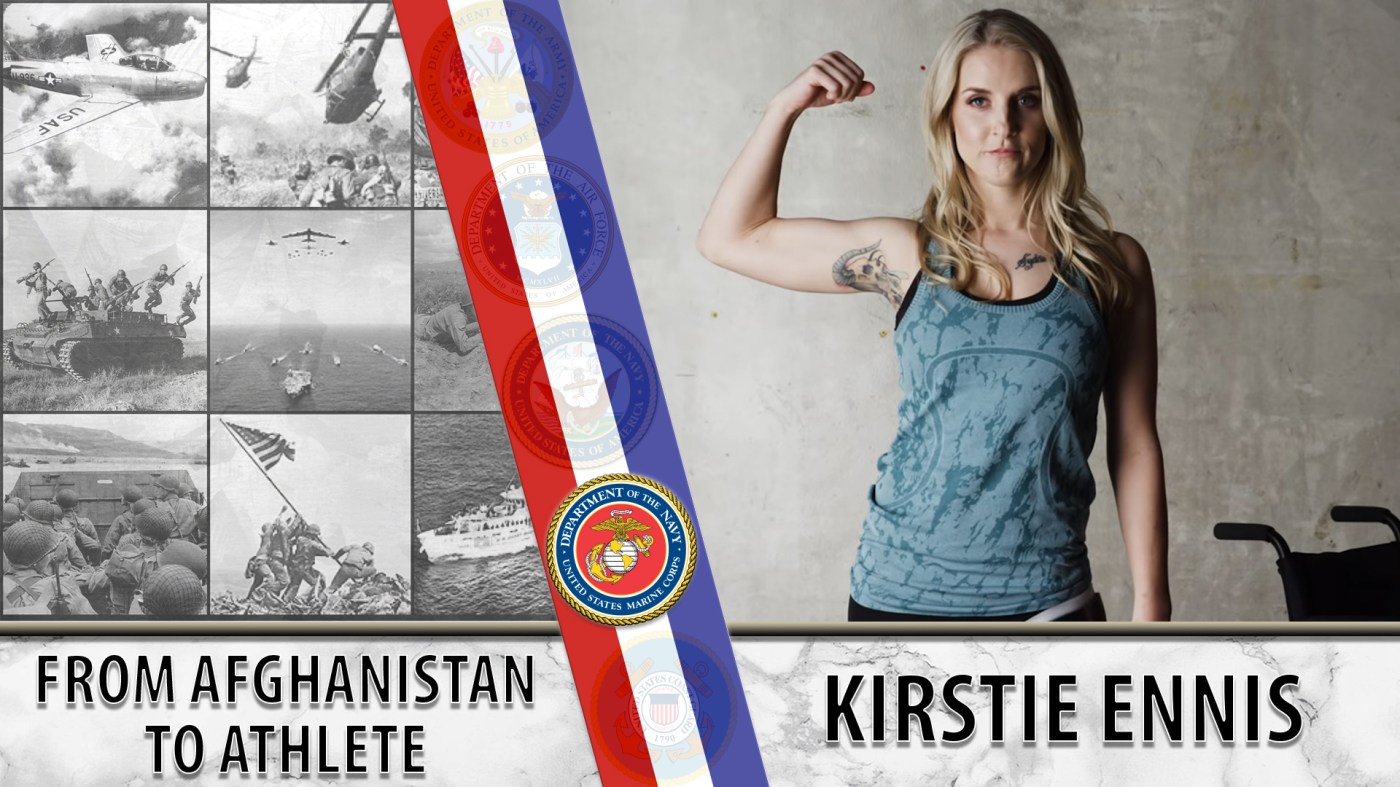 After a traumatic accident during Sgt. Kirstie Ennis’ deployment to Afghanistan left her with a prosthetic leg, she set out to inspire the world through her endeavors. Graphic created by Kimber Garland for the U.S. Department of Veterans Affairs.

In August 2008, 17-year old Kirstie Ennis enlisted in the United States Marine Corps in Pensacola, Florida. After training, she served as a door gunner and airframes mechanic on the CH-53 helicopter.

As a Marine Corps “brat,” choosing to enlist was not a question for her; she had been committed to serving and protecting her country since childhood. However, her plan to serve for 20 years was cut down to six after suffering traumatic injuries during her second deployment to Afghanistan.

On June 23, 2012, while performing combat resupplies to Forward Operating Base Now Zad, the helicopter Kirstie served on as an aerial gunner made a crash landing in the Helmand Province. She sustained a traumatic brain injury, full thickness facial trauma, bilateral shoulder damage, cervical and lumbar spine injuries, and severe left leg wounds. After approximately 40 surgeries over the course of three years, Kirstie’s left leg was amputated below the knee. One month later, she underwent an amputation above the knee. Even though she was forced into medical retirement from the Marine Corps in 2014, she still found a way to serve to prove to herself and the world that circumstances do not control us.

Although Kirstie does not have a background in sports, her competitive spirit led her to consider extreme sports as a way to raise money for others going through difficult situations like hers, and to inspire the world.

Even while lying in a hospital bed post-operation, snowboarding was one of the first sports Kirstie considered. She competed for three years, winning a USA Snowboard and Freeski Association national title.

In the future, Kirstie hopes to compete in the X Games, and–via her partnership with Burton Snowboards–create a program to take adaptive athletes on skiing and snowboarding trips.

When she’s not snowboarding, Kirstie also enjoys mountaineering, and is determined to climb the highest peak on each continent, a feat known as the “Seven Summits.”

In 2017, she climbed the Carstensz Pyramid in Indonesia, and also Mount Kilimanjaro. There, she left behind the dog tags of her friend Lance Cpl. Matthew Rodriguez, who was killed in Afghanistan in 2013. This endeavor also made her the first female above-the-knee amputee to summit Mount Kilimanjaro. Since then she has taken on several other challenging preparation hikes to train for the Seven Summits.

As if that wasn’t enough, Kirstie started a non-profit organization to raise money for organizations that strive to improve lives through education. She also sits on multiple charity boards. She even learned how to create her own prosthetics for climbing, and then used these skills to create a climbing foot for another retired Army Veteran who will use it to climb Mount Rainier.

From physical battles in combat to personal battles after her accident, Kirstie serves as a constant reminder to never hold back, to always live life to the fullest.

Thank you for your service, Sgt. Kirstie Ennis.