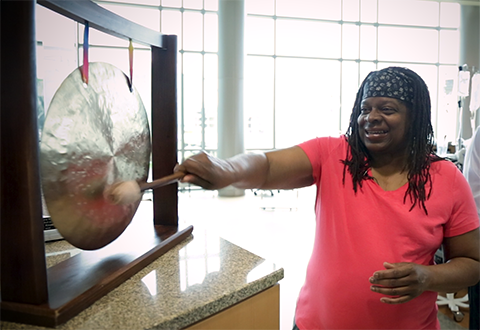 VA Salt Lake City Health Care System has partnered with many organizations throughout the Intermountain West, but one of the strongest and most enduring partnerships has been with University of Utah Health. And arguably, no Veteran knows the benefits of that partnership–which began nearly 75 years ago after WWII–better than Navy Veteran Vernique Lynn.

Since getting out of the Navy, Lynn has faced three major health “walls” and VA Salt Lake City and University Health collaborated to help her survive two.

“First and foremost, these are the two-best hospitals in the world,” she said, speaking of the George E. Wahlen VA Medical Center and University of Utah Hospital.

After serving eight years in the Navy, Lynn was eager and anxious to jump into civilian life, and at the time, she didn’t feel the need to look into VA benefits or health care. She worked as a surgical tech in Georgia, and focused on raising her two children.

“It was very aggressive,” she said. But she battled the breast cancer like a true warrior, going through numerous chemotherapy treatments. She eventually beat it and was declared a breast cancer survivor, but the toll was high–especially on her heart.

Vernique Lynn is a Navy Veteran, heart-transplant recipient, and two-time cancer survivor whose life was saved by VA Salt Lake and community partners.

As Lynn was visiting her doctor, he asked her about VA health care.

“At that point, I had gone through the first cancer episode, I didn’t know I could have VA benefits, which is one thing that we need to really truly advocate for I believe.”

Lynn enrolled at VA in 2011, and soon heard that VA Salt Lake City and the University of Utah would perform a heart transplant.

“These hospitals were the only ones that said ‘okay’ because of the cancer episode,” she said.

VA moved Lynn to Salt Lake City in 2014 to wait for her new heart. After nine restless months, she finally decided she was not going to worry about when she would receive her new heart and she just would “chill.”

The call came the next day.

She and a friend went to a movie, ate lunch, visited Red Butte Garden, and then toured downtown Salt Lake City. They were trying to find their way back to her hotel using her car’s GPS when her phone kept ringing, interrupting the directions, when she finally answered.

“I said ‘I’m sorry, I cannot talk to you right now. Can I call you back?’” Lynn recalled. “And the woman on the other end said, ‘Oh no, I don’t think you want to call me back on this. This is University of Utah and we have a heart for you.’”

She broke into tears. “We were just amazed, frantic, happy and tears streaming from both of us.”

Lynn received her new heart on March 29, 2015, at the University of Utah. She was transferred to the George E. Wahlen VA Medical Center a few days later, where she continued her recovery.

In 2017, Lynn’s breast cancer returned. Her VA health care teams in Georgia and Salt Lake collaborated with her doctors, and they determined it was best for her to come back to Salt Lake City for treatment through Huntsman Cancer Center. The treatment was successful and, on May 21, 2017, Lynn was once again declared cancer free.

Now, nearly two years later, living in Utah and back to work, Lynn is looking forward to seeing her daughter graduate from high school. She has also become an advocate for VA’s Whole Health program. VA Salt Lake City was tapped as a flag ship facility to implement VA’s health care redesign, where doctors and staff partner with Veterans and their families to consider all aspects of the Veteran’s life–not just their symptoms or illness.

Lynn, the Navy Veteran, heart-transplant recipient, and two-time cancer survivor who says she didn’t defeat cancer but loved it away, is grateful for a lot of things. On that list is the VA and University of Utah Health partnership that twice saved her life.

“It’s a beautiful thing that they were able to bring me down here so that I could have this excellent care,” she said. “I’m grateful, to say the least.”