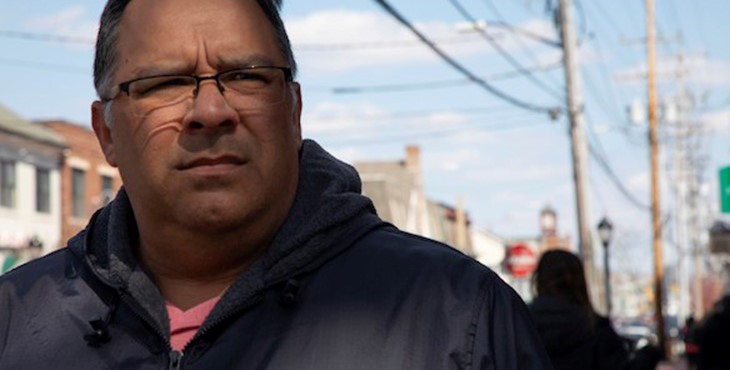 A month after the terrorist attacks of 9/11 is when Rogelio “Roger” Rodriguez first deployed to Southeast Asia. He was young, enthusiastic, the life of the party, and a self-described adrenaline junkie. By 2009, he had completed 10 deployments for the Delaware Air National Guard.

As a Senior Flight Nurse, Rodriguez managed crews that cared for wounded soldiers as they were airlifted from war zones to the next level of care. He estimates that by the time he retired in 2009, he had helped to evacuate more than 2,000 soldiers.

During his ninth deployment, Rodriguez sensed a change. “I started to not be scared, not have a little fear of flying into the combat zone. And that’s not healthy.” His weekly phone calls home, once full of funny anecdotes, were becoming flatter. He was less engaged, more serious and distant. But he went back for one more deployment.

Rodriguez returned from his tenth and last tour just before Thanksgiving 2009. “I couldn’t put my finger on it, but I knew something was wrong with me on the inside.”

Rodriguez retreated to his room, spending hours on his laptop or watching TV. He took a break from coaching his son’s soccer team, and didn’t always go to his daughter’s dance performances. He had trouble returning to civilian life, as he had done after his other tours.

Rodriguez’ wife, Carina, worried that she’d lost the fun-loving family man she’d married. The children told her a number of times that they wanted their old dad back. But the tipping point came when Rodriguez said he didn’t think he could go back to his civilian job. The family had counted on incomes from 2 working parents. They had plans to send their children to college, take family vacations, and save for retirement. When that appeared to be in jeopardy, Carina delivered an ultimatum: Get help, or risk losing your family.

With the full support of his family, Rodriguez made an appointment with a Readjustment Counselor at the local Vet Center. He was evaluated and diagnosed with PTSD. The counselor, who would become his PTSD therapist, offered him several effective treatments. Roger chose Eye Movement Desensitization and Reprocessing (EMDR).

In EMDR, you work with your therapist to lower your stress as you bring the traumatic memory to mind. When you feel less stress, your mind can bring in new information, and you’ll start to experience the memory in a different way. The events don’t change, but the way you understand them will.

Rodriguez had experienced multiple traumas over the course of his service. His therapist asked him which trauma he wanted to start with. “The one that came to mind was being shot at for the first time. It was missile lock.”

He chose a specific event to pay attention to. At the same time, he felt short “taps” from instruments called “tappers” that he held in each hand. As these two things were happening, his therapist checked in with him to find out whether there were any changes in the memory and how he felt. Rodriguez repeated this process. Over time, a new, more constructive view of the memory took the place of the old one.

“The point that we moved to a different traumatic thought, was when I was able to go into therapy and talk about the first traumatic thought and not feel stress or anxiety about  it. Going into the second traumatic event was much easier to process because I knew what to expect.” Roger’s PTSD symptoms began to subside.

“Now I can look at the traumatic memories and not feel anxiety,” he said. “They have been processed and placed into long term memory where they belong. They’ve been re-filed.”

Today the old Roger Rodriguez is back: helping with homework, going to soccer games and dance practices, and joking around at raucous family dinners. And he’s found a job he loves, as a nurse in a school for chronically ill children. He says, “This job is a good fit, ” both for him and for his family.

His old friends from the Air National Guard call him often to tempt him back. They told him that when he gets bored and is ready for some high-altitude action, they’d put him back in the helicopter. “I love you but I don’t think I want to do that anymore,” he tells them. “I’m good!”

Watch the full story of Roger’s experience with EMDR.

Watch the Rodriguez family share how PTSD treatment made their family stronger.

Victoria Bippart and Peter Frumkin, producers of AboutFace, feature the real stories of Veterans who have experienced PTSD, their family members, and VA clinicians.