VA celebrates the 75th Anniversary of the GI Bill 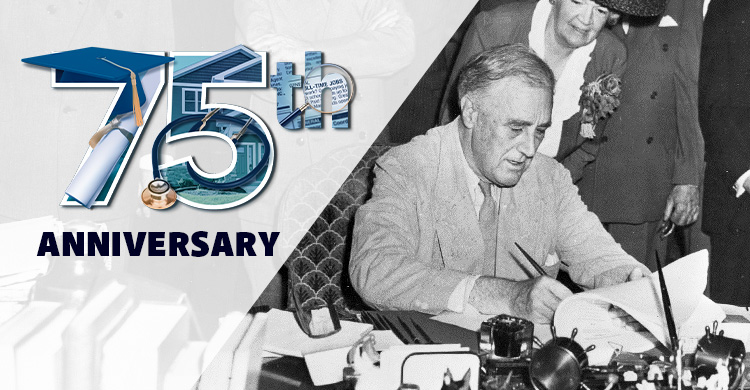 On June 22, 2019, we celebrate the 75th Anniversary of the GI Bill (Servicemen’s Readjustment Act of 1944). The Bill, which was intended to help those returning from service during World War II to transition into civilian life, has been changing the lives of Veterans and their families ever since.

When President Franklin D. Roosevelt signed the legislation on June 22, 1944, he wrote, “With the signing of this bill a well-rounded program of special veterans’ benefits is nearly completed. It gives emphatic notice to the men and women in our armed forces that the American people do not intend to let them down.”

This sweeping legislation made college education and home ownership a possibility for the average American.

The Servicemen’s Readjustment Act of 1944 contained the following major provisions:

What happened because of this legislation was unexpected and unprecedented.

In a few short years, higher education went from something only available to the elite, to an attainable goal for the average American. Many Veteran students were the first in their families to attend college. The number of degrees awarded by U.S. colleges and universities more than doubled between 1940 and 1950.

“Because of this massive effort to educate young people, the United States became the world leader in technology and scientific advances, said Paul R. Lawrence, VA Under Secretary for Benefits. “When we look at the achievements of “The Greatest Generation”–medical advances, new technologies like computers, space travel–we have to attribute this, at least in part, to the GI Bill.”

Achieving an education led to the emergence of the middle class with more buying power. With low cost, VA backed home and business loans, Veterans bought homes instead of renting and they started businesses. The “Greatest Generation” was on the way to making the American Dream a reality.

This impact continues today as generations of American Veterans have benefited from this legislation.

For more information on the GI Bill and to view videos from Veterans on how the GI Bill changed their lives, visit our web page at www.benefits.va.gov/gibill75