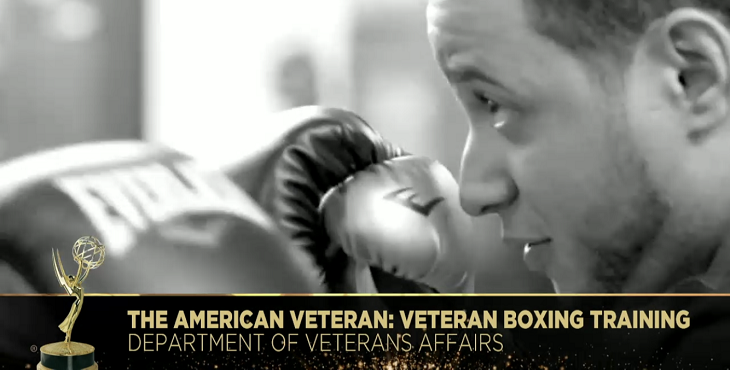 A video story produced by VA focusing on a Veteran boxing training program at Gleason’s Gym–America’s oldest active boxing gym–received an Emmy Award at a ceremony June 22 in Bethesda, Maryland.

The National Capital Chesapeake Bay Chapter of the National Academy of Television Arts and Sciences recognized the segment produced for VA’s The American Veteran video series, and honored the series with its second Emmy since the show was relaunched in 2017 after a three-year hiatus.

The recognition was announced at the 61st annual regional Emmy Awards ceremony and was presented in the Health/Science – Program Feature/Segment category. The segment, titled “The American Veteran: Veteran Boxing Training,” was produced, shot and edited by VA’s digital team, which is part of the Office of Public and Intergovernmental Affairs (OPIA).

Located on the banks of the East River in the DUMBO (Down Under the Manhattan Bridge Overpass) neighborhood of Brooklyn, Gleason’s Gym is owned and operated by Vietnam Veteran Bruce Silverglade. Silverglade, who has owned the gym since 1983, had long been interested in creating a training program for Veterans, but wasn’t sure he could do it on his own. “I got a call from the VA hospital in Manhattan, from a fella by the name of Jonathan,” said Silverglade. “He came over to talk to me about a program they had.”

The video is one part of VA’s ongoing effort to engage and reach out to the Veteran community directly. The VA digital portfolio includes: more than 150 Facebook pages, most of which belong to individual VA medical centers; the VAntage Point blog; nearly 100 Twitter feeds; Instagram; a Flickr photo library; and a YouTube channel. The department also distributes the “Borne the Battle” podcast.

The American Veteran was produced by VA for more than a decade before going on hiatus in 2014. During its active season, the show garnered numerous Telly, CINE and Aurora awards, as well as multiple Emmy awards and nominations.

According to its website, the National Academy of Television Arts & Sciences (NATAS) is dedicated to the advancement of the arts and sciences of television and the promotion of creative leadership for artistic, educational and technical achievements within the television industry. NATAS recognizes excellence in television with the coveted Emmy Award; regional Emmys are given in 19 markets across the United States.

Watch the Emmy Award-winning story above or on VA’s YouTube channel.