Can brain stimulation ward off dementia? 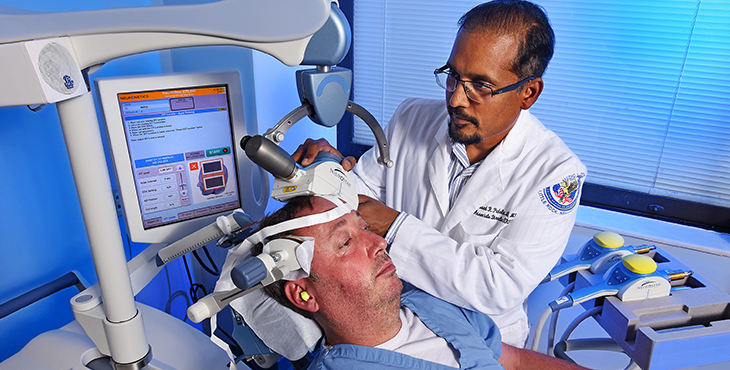 Above: Dr. Prasad Padala demonstrates how repetitive transcranial magnetic stimulation works with the help of a staff member at the Little Rock VA. (Photo by Jeff Bowen)

Being diagnosed with pre-dementia is unsettling, to say the least. The condition, also known as mild cognitive impairment, is marked by memory loss, confusion, mood swings, and other challenges. At least 15% of people with pre-dementia age 65 and older go on to develop full-blown Alzheimer’s disease or other dementia.

The risk is even greater if someone displays apathy. These people are up to seven times more likely to get dementia, compared to those without apathy, says Dr. Prasad Padala, a geriatric psychiatrist at the Central Arkansas Veterans Healthcare System.

Apathy, a common problem in patients with pre-dementia, is a profound loss of motivation, interest, and initiative. An example would be someone who is reluctant to get out of bed and spends the day sitting around doing nothing.

Padala has long been studying apathy in those with Alzheimer’s disease. Now, he’s leading a study aimed at delaying the onset of Alzheimer’s in people with apathy via a brain stimulation therapy: repetitive transcranial magnetic stimulation (rTMS). He and his team are hoping that the stimulation will reduce apathy and thereby slow the progression of pre-dementia to dementia.

“Currently, we have more than 5 million Americans with Alzheimer’s and no definitive treatment,” says Padala, who works in the Geriatric Research Education and Clinical Center at the Central Arkansas VA and also directs the facility’s Memory Disorders Consultation Clinic.
“Postponing onset of the disease by even five years will reduce the number of people with Alzheimer’s in half.”

Padala is recruiting 125 Veterans with pre-dementia for his four-year study. They are being randomized to the rTMS group or a sham stimulation.

Padala says rTMS is a non-invasive procedure that has been tested for similar conditions. Plus, he says, it offers the option of targeting a specific area of the brain and adjusting the strength of the simulation for each Veteran.

The FDA has approved rTMS for treating refractory depression, which means patients have been resistant to other forms of therapy. But rTMS is only in the investigational stages for treating apathy in people with pre-dementia.

Using rTMS, Padala will be targeting the pre-frontal cortex of the brain, which houses part of the reward circuitry.

He hopes to have data at the end of his study to support a larger, more definitive clinical trial involving VA sites nationwide.

“At the end of four years, we’ll know for sure if this treatment works for apathy and improves memory or not,” says Padala. “But we won’t have enough data to definitely say if this prevents dementia. We’ll have preliminary data, which is what we’ll show when applying for the next grant. We want at least 20 VA sites to be part of a big study.”

To read more about this study and related work by Padala’s team, visit VA Research Currents.