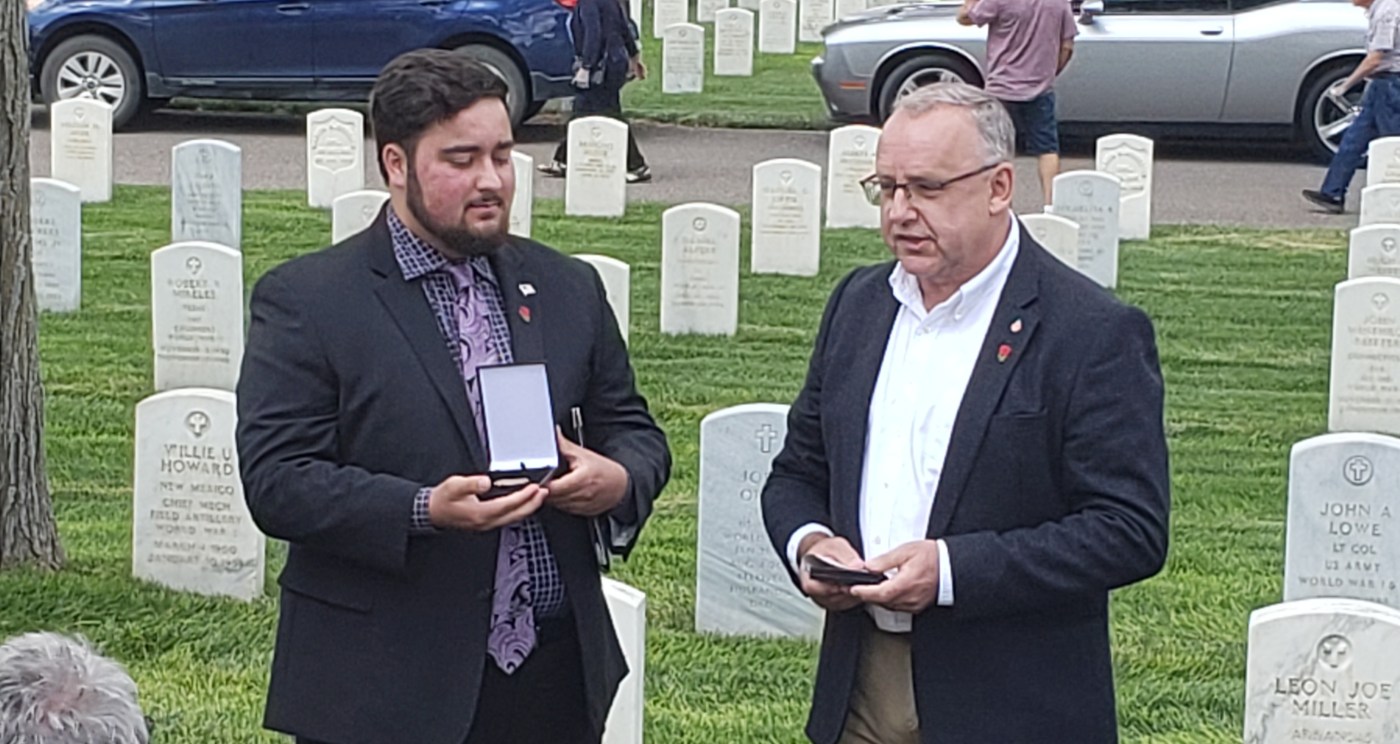 On July 23, the lost dog tag of WWII soldier, Pfc. David Solomon Ortiz, was returned to his family at Santa Fe National Cemetery. On July 12, 1944, Ortiz was killed while moving with members of the Army’s 2nd Infantry Division as they sought to take German held Hill 192 outside Saint-Lô, France. He was initially buried in France, but his remains were brought home in December 1947 and interred at VA national cemetery in Santa Fe, New Mexico.

On July 12, 1944, Pfc. David Soloman Ortiz was killed while moving with members of the Army’s 2nd Infantry Division as they sought to take German held Hill 192 outside Saint-Lô, France

Somehow, his dog tags ended up in a field about two miles away from the battle, separated from his body.

British historian David Billingham found Ortiz’s dog tag in a field in March 2017. He and a friend were on their way to Normandy from their digging project in the area near Saint-Lô, France, and stopped at a field believed to be the site of U.S. troop activity during WWII. There, Billingham found the rusted dog tag very close to the surface, and the name and serial number were easily read. He knew it was significant and knew they needed to be returned to the family.

Billingham contacted Placitas, New Mexico, photographer Ron Overley and asked him to help find any living descendants in New Mexico. Even though they did research with libraries, Veterans organizations, Santa Fe National Cemetery and state archives, they were not able to locate family. Finally, a breakthrough came earlier this year when Billingham found a social media message online about Ortiz and reached out to the person who posted it, Linda Stanley, a sister-in-law of Lopez. The conversation led to returning the dog tag to the family.

When the details of the return were finalized, family contacted Cemetery Director Jared Howard with the request for a family gathering at the burial site of Pfc. David Solomon Ortiz to allow David Billingham to present the dog tag to the family.

On July 23, Ortiz’s great nephew, David Ramon (a 21-year-old college student) received the dog tag from Billingham at Santa Fe National Cemetery. A bagpiper played “Amazing Grace” and Cemetery Representative Ezequiel Acevedo played TAPS at the family’s request. (In the past, the family had always asked to omit TAPS from events honoring Ortiz as it was too painful. The ceremony helped bring them closure and they were finally ready to hear the song.)

Lana Shuman is a public affairs specialist for the Dallas regional office.