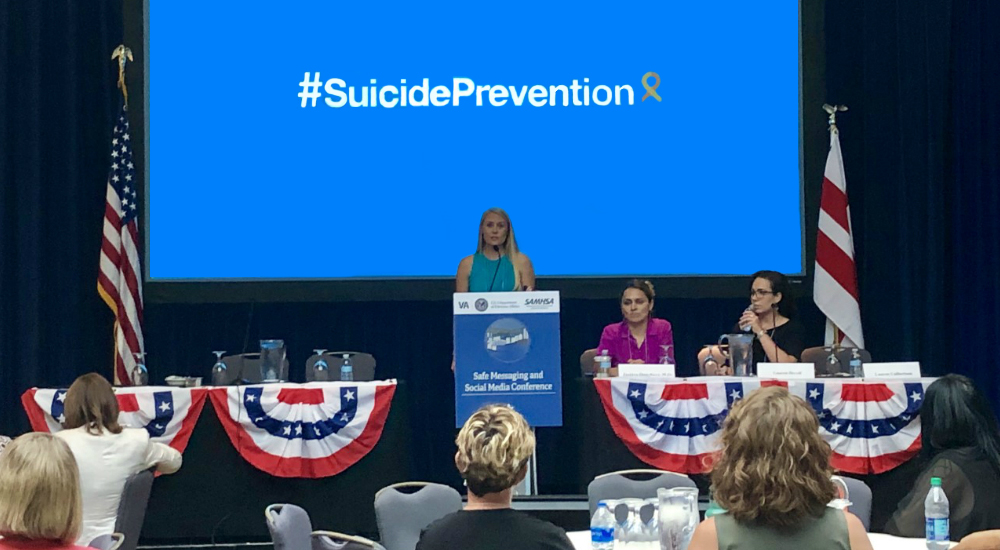 Research has shown that the way media and other public-facing messages address the topic of suicide can influence behavior–either positively, by encouraging help-seeking, or negatively, by increasing the risk for suicide contagion. The conference was part of VA’s ongoing efforts to educate media representatives and the general public about the importance of safe messaging in reporting and other public communications.

The “Safe Messaging and Social Media” conference included plenary sessions, workshops with subject matter experts, and roundtable discussions that allowed participating teams to collaborate and identify community priorities. Participants heard from a broad range of speakers and learned how to implement safe messaging best practices in their own public-facing communications, and how to encourage local media and other organizations to do the same–all in the interest of preventing Veteran suicide.

Representatives from Facebook and Twitter presented to conference attendees about supporting mental health online and recognizing warning signs within social media communities. The speakers from the social networking platforms also provided examples of machine-learning advances each employs to enable interventions and resources for users to report those exhibiting crisis.

“The Twitter community can be an invaluable source of support for people, including Veterans who might be struggling with mental health issues. We are honored to participate in this important event to ensure our partners are well equipped to leverage the power of Twitter,” said Lauren Culbertson, a conference speaker and public policy manager at Twitter. “We are also pleased to share our work aimed at preventing self-harm and suicide, including Twitter’s global #thereishelp notification, which provides mental health resources to vulnerable people and encourages them to reach out to get help when they need it.”

Participants learned that careful coverage of suicide can change public misperceptions and correct myths, which can then encourage those who are vulnerable or at risk to seek help. They will use the knowledge gained at the conference to support local implementation of the National Strategy for Preventing Veteran Suicide, which provides a framework for identifying priorities, organizing efforts, and contributing to a national focus on Veteran suicide prevention.

“To positively affect the rate of suicide in military and Veteran families, we have to collaborate with media, lawmakers and our community partners to safely communicate data, resources and information related to the work we’re doing to reduce Veteran suicide,” said Nicole Baker, a public information officer at the Arizona Department of Veterans’ Services. “I’m energized by the best practices I’ve added to my toolkit [at this conference] to better engage Arizona’s military and Veteran community.”

The health and well-being of our nation’s Veterans and former service members is VA’s highest priority. Guided by data and research, VA is working with partners, Veterans’ family members and friends, and the community to ensure that Veterans and former service members get the right care whenever they need it. To learn about the resources available for Veterans and how you can Be There as a VA employee, family member, friend, community partner or clinician, visit www.mentalhealth.va.gov/suicide_prevention/resources.asp.

If you or someone you know is having thoughts of suicide, contact the Veterans Crisis Line to receive free, confidential support and crisis intervention available 24 hours a day, 7 days a week, 365 days a year. Call 1-800-273-8255 and Press 1, text to 838255 or chat online at VeteransCrisisLine.net/Chat.

Aaron Eagan is the deputy director of operations and integration for suicide prevention in VA’s Office of Mental Health and Suicide Prevention.

Tony Davis joined VA in March 2016 and is on the Veterans Experience Office team. Tony is a retired Army Intelligence Officer and combat Veteran. After retiring from the Army, Tony served as the Country Director for all USO operations in South Korea before returning to the U.S. and joining VA. In his current assignment, Tony covers Veterans, Family, and Community Engagement activities for New York, New Jersey, Pennsylvania, and Delaware.