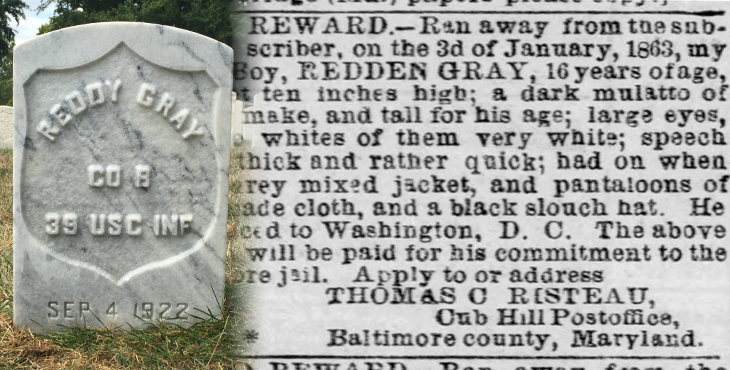 Deed of Manumission and Release of Service,” 1865.

Former slave and Civil War Veteran Reddy Gray died on this day in 1922, when he was 79 years old. He was buried in Baltimore’s Loudon Park National Cemetery–the first VA burial site included in the National Underground Railroad Network to Freedom.

Gray’s experience is representative of African Americans who risked travel through the Underground Railroad to find freedom, but his story is significant for the wealth of information gleaned from public records. His life is a reminder of the fight for civil rights that began in the colonial period, was galvanized in the 1860s, and continues today.

Gray went by Reddy, short for Redmond, Redman or Reverdy. Born at Loch Raven, Maryland, to John and Lydia Talbott Gray, he was enslaved by the Thomas Cradock Risteau family in Baltimore County from birth to until the middle of the Civil War. Likely a field worker or carriage driver, he resisted servitude by escaping in March 1863. It is not clear what happened, but Gray’s “Deed of Manumission and Release of Service” retroactively corresponds with his enlistment. President Abraham Lincoln had already issued the Emancipation Proclamation, and the U.S. Army was recruiting black soldiers.

Gray enlisted in the U.S. Colored Troops at Baltimore City on March 23, 1864. His Company B, 39th U.S. Colored Infantry, fought in Virginia at the Sieges of Petersburg and Richmond, and in the expeditions and capture of Fort Fisher and Wilmington in North Carolina. Reddy mustered out in Wilmington on Dec. 4, 1865, and that record remarks, “slave when enlisted.”

His life after the Civil War shows personal accomplishment and community involvement. He learned to read and write. He returned to Baltimore and had four children, including son Redmond, with second wife Susan Gray, who worked as a laundress. In the army he suffered from rheumatism, for which he received a disability pension in 1890; however, he worked as a manual laborer doing light work like trimming lawns or gathering rags and as a carriage driver.

As “Redmond” Gray, he appears in the Baltimore Sun, Sep. 15, 1894, as judge for a running race at the “Colored People’s Fair” in Timonium, Maryland; and a few years later as a member of the Colored-Odd Fellows. Reddy (also Reverdy) Gray is honored with his name on the African American Civil War Memorial in Washington, D.C. Other black soldiers who found their freedom through the Underground Railroad are buried at Loudon Park National Cemetery along with Gray, but their stories are not so easily documented.