Army Veteran’s ‘can do’ attitude helps him on golf course 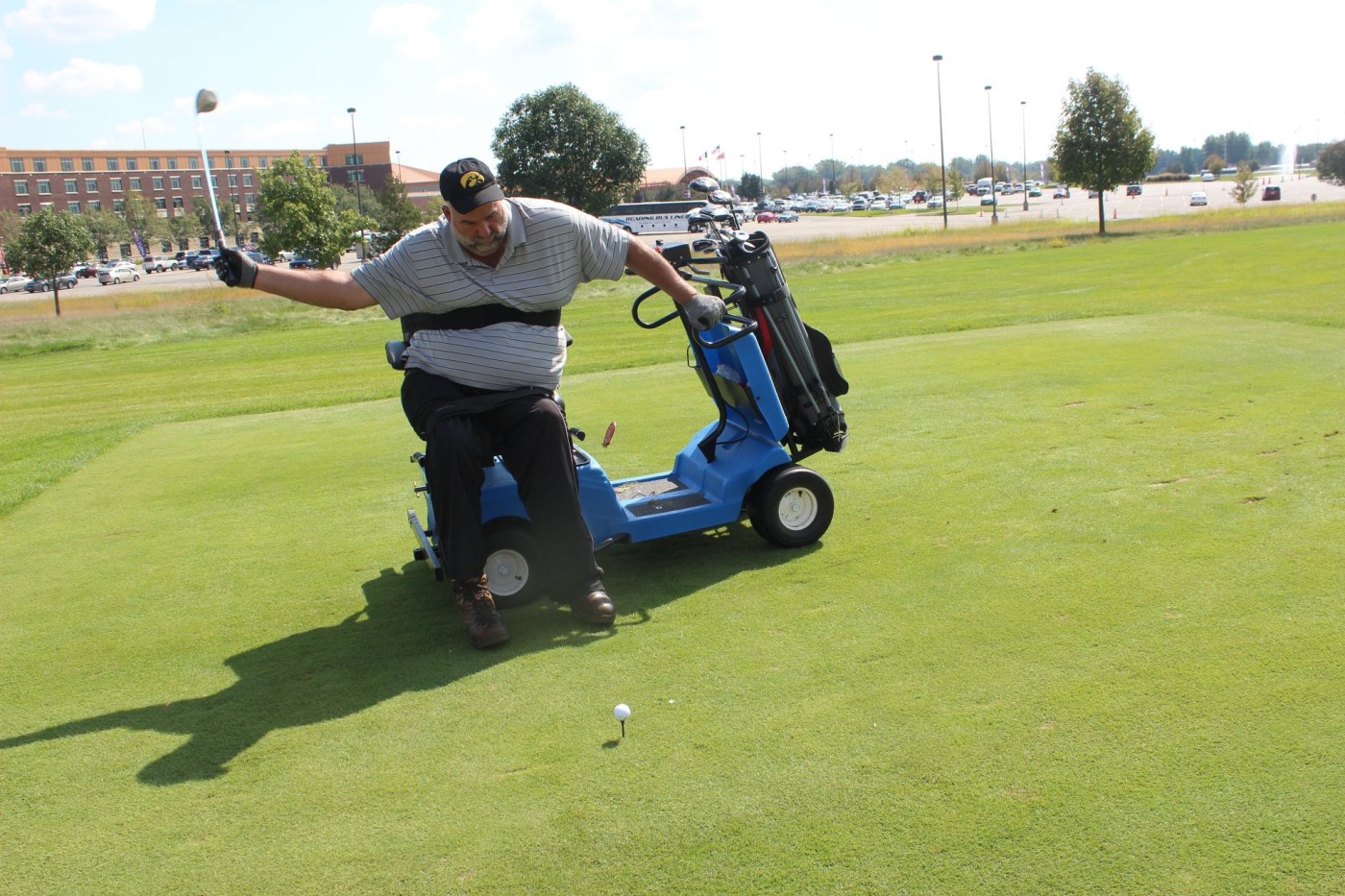 Army Veteran Dan Alberts, who was paralyzed from the waist down in a 1997 snowmobile accident, is not the average golfer.

“They don’t make a lot of equipment for someone who’s 6 foot 11 inches tall.”

On the green, his single-person cart pivots to the side so he can hit while seated. He also swings golf clubs specially adapted to his tall frame, long legs and sitting position. For example, a normal driver with Alberts’ swing speed would have a loft between 7 and 9 degrees. Alberts uses a 15-degree driver.

Alberts is no stranger to the challenge of adapting. Because of his size, the Army granted him a waiver to join in 1984. He served as a heavy wheeled vehicle and tank mechanic, stationed one year at Fort Stewart, Georgia, and three years in Bobingen, Germany, with the 1st Infantry Division. Alberts said his size provided a unique perspective when driving Abrams tanks for testing after maintenance.

“I could drive with the hatch open, but not the hatch closed,” he said. “We would go down the road at 60 miles per hour in Germany.”

Following his tour in the Army, Alberts used the Montgomery G.I. Bill to attend Indian Hills Community College in Iowa, where he played basketball and earned an airframe and powerplant license. He also attended Lewis University in Joliet, Illinois.

After college, Alberts worked two different jobs, including a couple years on aircraft, and 22 years with a cabinet company in Iowa. But in between, the accident left him paralyzed from the waist down and with nerve damage to his left arm.

“The VA has done a lot for me since I had my accident,” he said. “I’ve met a lot of great people through the VA.”

NDVTEE demonstrates that having a visual impairment or physical disability is a conquerable obstacle to an active, fulfilling and rewarding life. It also gives Veterans a chance to develop new skills, build self-esteem, and expand fellowship.

“There’s camaraderie being with other Veterans, meeting new people and having a good time,” he said. “There’s freedom in showing people how you can do whatever you want to do in a wheelchair with a little help.”

Alberts said he appreciates all the staff and volunteers who help. He said he also gains inspiration from fellow players who are quadriplegics and blind players—who he admitted beat his score.

“Some of the equipment they have is amazing in what it does,” he said, adding he’s seen everything from white stripes to help blind people to golf club attachments for missing limbs to guns that shoot golf balls toward the hole.

The activities offered by the NDVTEE Tournament, co-sponsored by VA and DAV (Disabled American Veterans), give Veterans an opportunity to develop new skills, strengthen their self-esteem, and expand fellowship and camaraderie among the participants.

“If you’re all cooped up in the house all the time, you’d be surprised what you can do,” he said. “Can’t isn’t in the vocabulary. It’s a can-do attitude.”

“I’m not surprised by my husband,” she said, referring to his “Bulldozer” nickname for charging forward. “From the day he was hurt, he never let the accident stop him. He just never stopped. I wasn’t surprised that he figured it out with the adaptive clubs. He always manages a way.”

For other Veterans who haven’t tried adaptive golf, Alberts had some candid advice.

“The sky is the limit,” he said. “You can do it, even if you don’t think you can do it. Being disabled, you can do anything anybody else can do. You just do it different. Being out there, you don’t feel disabled. Get out there and do it. You will have a great time. Sign up.”

VA and DAV will host nearly 300 Veterans with visual impairments, amputations and physical and mental challenges at the annual adaptive sports event Sept. 8-13 near Iowa City, Iowa. Dan and other Veterans will have opportunities to develop new skills, and options to enjoy other recreational sports, including horseback riding, disc golf, fishing, kayaking, scuba diving and biking to further boost their confidence.