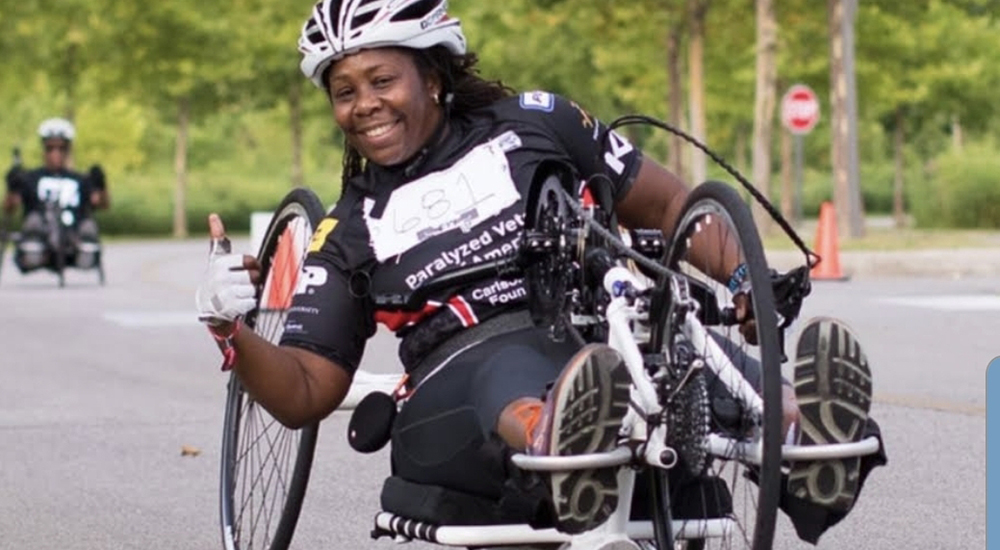 The National Veterans Wheelchair Games gave Army Veteran Candice Caesar a new social circle and extended family. Here’s how she got there.

Caesar was involved in a motor vehicle accident while stationed in Germany in 1999. The vehicle slid on black ice and crashed. A soldier in the back seat, who was not wearing a seat belt, flew forward and slammed into her, breaking several of her vertebrae. She also punctured a lung and sustained a traumatic brain injury.

“I couldn’t move anything on my right side,” she said.

A German doctor fused Caesar’s vertebrae but nicked her vocal cord in the process, leaving her barely able to speak for six years. They also told her they didn’t think she would walk again.

“I couldn’t believe it,” she said. “I thought, ‘You don’t know what you’re talking about.’ I went into denial. Then I leaned on my faith and said, ‘I’m going to walk a marathon.’

“I did not know that a marathon was 26.2 miles. That is just what came into my brain. ‘You don’t know what you’re talking about.’ I just didn’t believe them.”

As she lay in bed, she lamented her lost military career. She was going to be a drill sergeant, get her commission and become a physical therapist.

“I had a plan and now you’re telling me I can do none of these things?” Caesar asked. “You’re taking away my career and telling me I can’t walk? Well, you’ve got to leave me something. I can’t have my Army career, but I can have movement over my body, and that’s what happened.”

That attitude only works when it’s turned on, she adds. The first time she walked, she took two steps and then it was back into the wheelchair.

A lot of falling… bleeding… crying

“There was a lot of falling,” she said. “A lot of bleeding and crying. Some days I lay in bed and said, ‘God, why did this happen to me? I need to die. I can’t kill myself, but just let me die. Let me close my eyes and just die.’ I was in an awful place.”

Caesar was desperate to get home to her two-year old son, whom she hadn’t seen since the accident. She begged doctors to discharge her. After approximately five weeks in the hospital, using a flat-bed crutch and a cane, she was able to walk enough to go home.

A speech therapist inspired her, working with her on learning to swallow, training her voice’s pitch and her ability to project. The therapist also suggested a career change.

“She said, ‘You can be a speech pathologist.’ What are you talking about? I can’t remember anything! Can’t speak! Can’t hear! And the therapist told me, ‘I’m going to get you right.’”

Caesar receives treatment for her SCI (spinal cord injury) at the Houston VA .

Caesar struggled when she medically retired from the Army in 2002. She spent many nights in tears; however, she kept getting physically and mentally stronger, incorporating more and more muscles.

“When I left the Army, I was able to walk with a cane, with assistance and some leg braces,” she said. “To walk, I have to pick my hip and quad up and put it down. I’ve got a lot of movement. It’s still weak, but it’s movement.”

So much movement that she did what she assured her doctors in Germany that she would do–run/walk a marathon. So far, she has completed 17 marathons and 73 half marathons in 43 states.

Army Veteran Candice Caesar runs her first marathon with her son by her side.

Caesar joined the Paralyzed Veterans of America Texas Chapter and discovered the Wheelchair Games when her Houston VA doctor advised her to find other activities, as running was too tough on her body.

“I had the best time with Wheelchair Games,” she said. “When I left this year’s games in Louisville, KY, I had 20 new connections. I didn’t understand the different activities and organizations that I could be a part of. I learned that by going to Wheelchair Games and being hooked up with the Paralyzed Veterans of America. They have no idea how they’ve changed my life.”

Her favorite event at the games was using a hand cycle to do the 10K. There was a “killer hill” that she had to pass several times. That hill almost got the best of her, but she persevered and once she conquered it the first time, her confidence soared.

Caesar is determined to make these games an annual event, no matter what is going on in her busy life. Since the accident, she’s gotten two bachelor’s degrees and a master’s degree in speech pathology. She is a speech pathologist, working with autistic children.

“I have to be at the Wheelchair Games,” she said. “I have people to hang out with, people to talk to, connections to make, and some rivals to beat.”