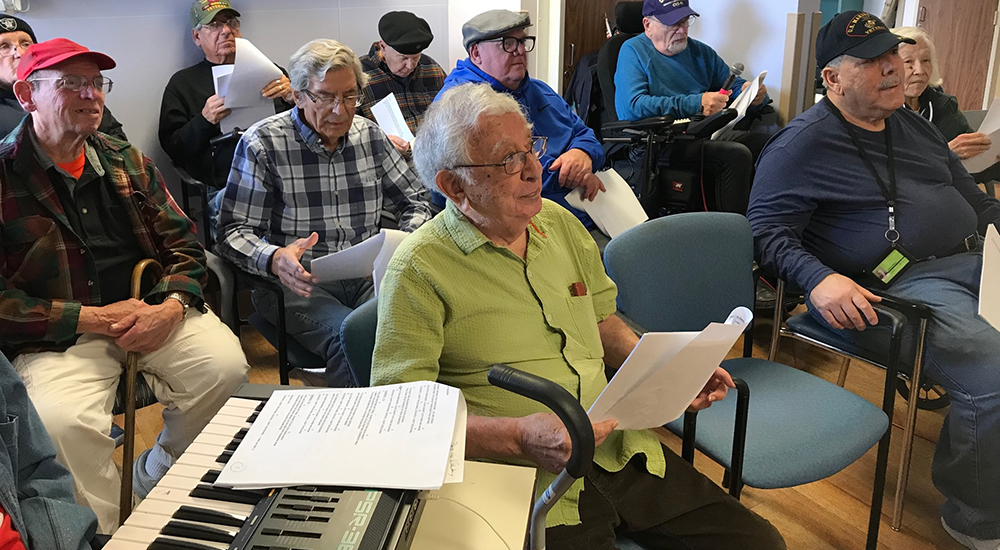 Veterans in the Rubber Band, a musical group at the VA Greater Los Angeles Healthcare System, may not party like rock stars, but they do write and play their own music.

“I’ve definitely benefited in more ways than I can describe,” he says. Singleton, who served in the Korean War, plays congas and teaches rhythm and vocal technique to fellow band members. “We’re struggling through a period of our lives [at our age]. There are no shaded trees and we want to be free. The music encourages us so that we can stand up to the fight.”

“We’re doing a little bit of everything but, most importantly, the Veterans are participating in a fun, effective cognitive activity, keeping them engaged.”

Band member Morris Rosen, a Veteran of World War Two, remembers hitchhiking down the West Coast from Oregon to southern California shortly after leaving the service. He and Burruel worked together to turn his adventures into a Rubber Band song, “The 101,” which begins:

Looking for adventure and some fun

Los Angeles VA psychologist Dr. Falguni Chauhan says that for Veterans, playing in the Rubber Band is not only fun but helps reduce anxiety, improve healing and increase attention and communication.

“The Veterans express and work through difficult emotions using rhythm, movement, instruments and senses like sound, touch, visualization and more,” he said.

Burruel hopes to help other VA facilities establish their own musical groups.

“After seeing the results, people want to keep going,” says Singleton. “We’re a team, everybody seems open and we stand on common ground. We’re all supporting one another too.”

SON VETERANOS – The power of healing through salsa music

Music matters: How to bring more music into your life