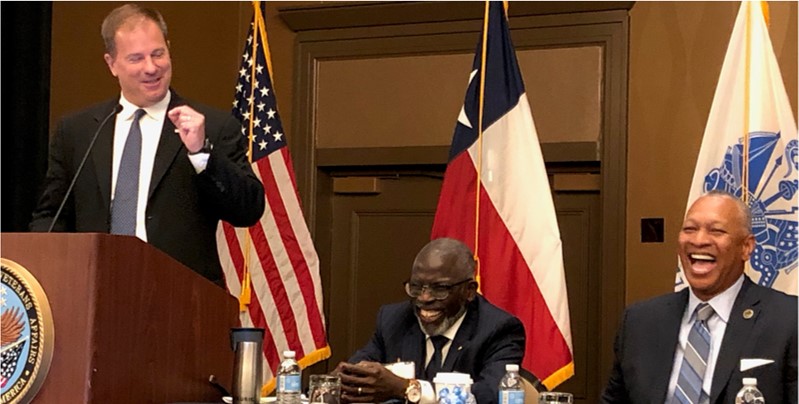 Deputy Secretary of Veterans Affairs James Byrne welcomed the more than 750 attendees to the conference.

“This event provided an opportunity to meet and engage with a diverse collection with people of color, and was outstanding,” said Marine Veteran William O. Dwiggins from Dallas. “I’m looking forward to learning about the 2020 National Minority Veterans summit location and dates.”

The summit was led by Center Executive Director Stephen B. Dillard and Deputy Director Dennis O. May. Its goal was to honor the service of minority Veterans, and to provide them and the organizations that serve them with information about VA benefits and services. Lastly, to serve as a platform for VA leaders to hear directly from minority Veterans.

“From the Veterans Health Administration perspective, we use events such this summit to share information about how VA health care makes a difference in the lives of minority Veterans,” said Veterans Health Administration Chief of Staff Lawrence B. Connell. “One recent study indicated that African American males are twice as likely to die from prostate cancer than their white counterparts. However, this isn’t the case with the VA; the survival rates here are equal. What this means is VA provides African American Veterans better access to health care.”

During the conference, attendees were also able to participate in breakout sessions focused on employment, mental health, and entrepreneurship. They also had the chance to establish and strengthen their relationships with numerous partners. Among those were VA subject matter experts; military, federal, state, and local agencies; Veteran Service Organizations, and tech industry and corporations. They also participated in “Voice of the Veteran” panels.

Bobbi Gruner is a public affairs specialist for VA’s Office of Public and Intergovernmental Affairs.