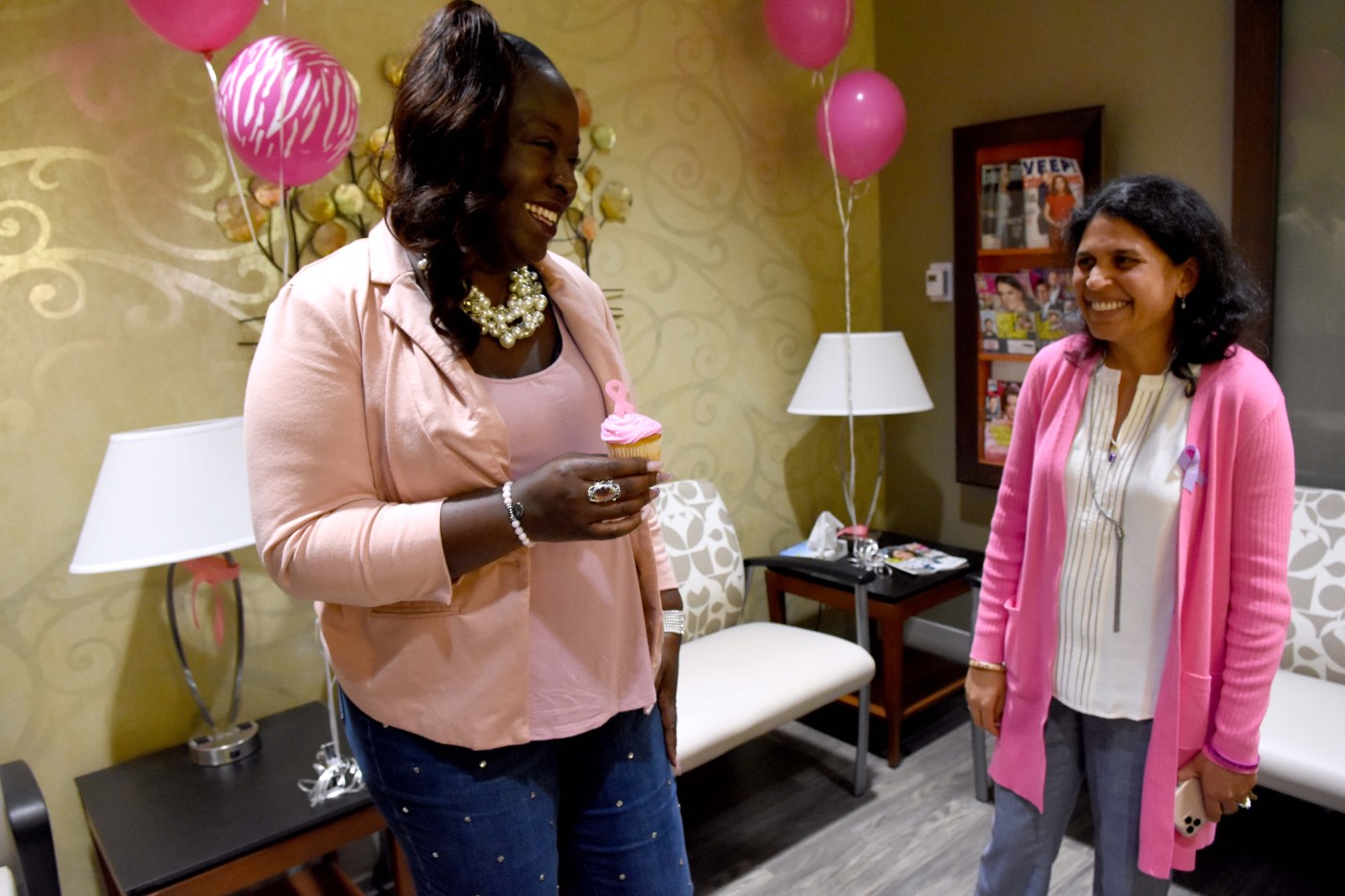 October is breast cancer awareness month. The American Cancer Society estimates approximately 268,600 new cases of invasive breast cancer will be diagnosed in women in 2019 and another 2,670 in men. Chillingly, one in eight women will develop breast cancer in their lifetime. Many will beat cancer and serve as inspiration to those facing a diagnosis and their own personal battle.

Everything will be fine.

In 2015, Tawana Bridges was preparing for her retirement after 20-years in the U.S. Army, but instead of preparing for a new life without deployments, uniforms, and in the middle of planning for a move to Dallas from El Paso, Bridges faced a new challenge.

“I noticed a lump on my side,” said Bridges. “It was during the holidays and I can remember thinking, I’ll go get it checked out and everything will be fine.”

She did not get the results she was expecting. It was breast cancer. Bridges, a mother of two, quickly started chemotherapy at Dallas VA Medical Center.

It was happening again.

In 1994, U.S. Navy Veteran, Susan Rutland was welcoming her 40th birthday with open arms. Instead, she would spend her birthday being wheeled into the operating room for a complete mastectomy.

Rutland had just gotten married earlier that year and was a new stepmom to three young girls. Battling breast cancer was not how Rutland imagined the first days as a new blended family would go.

“I knew I needed to get better,” said Rutland. “I had to get through it because I had my son and those little girls that needed me.”

Rutland’s diagnosis of ductal carcinoma in situ, or DCIS, was treated with a complete mastectomy.

Over the next 25-years, Rutland kept up with her mammograms every six-months and eventually went to yearly checks. In August 2019, Susan arrived at the Dallas VA Medical Center for her routine screening, however this time, she did not get the results she was expecting. Cancer. Again.

Facing a second diagnosis of DCIS, she moved forward with treatment and underwent a partial mastectomy.

“I was waiting for my surgery and I broke down,” said Rutland. “I remember being wheeled in the back and reality hit me that this was happening all over again.”

Rutland beat cancer for a second time and joined the more than 3.5 million breast cancer survivors in the United States.

“I am very positive. My son says Mom-2 Cancer-0–no doubt in my mind that I will be just fine,” said Rutland.

I am a man. How do I have breast cancer?

U.S. Army Veteran Otis White had a 1 in 833 chance of a breast cancer diagnosis. He beat his diagnosis thanks to VA North Texas Health Care System.

According to the American Cancer Society, the lifetime risk of men getting breast cancer is about 1 in 833.

Otis White worked in communications while serving in the U.S. Army and National Guard and found himself all over the world. But he never thought he would find himself inside the mammography suite at the Dallas VA Medical Center.

“One day I felt something like a knot, it was really hard, it wasn’t sore or anything but thought it wasn’t supposed to be there,” said White. “I had a doctor’s appointment in three weeks, so I thought I would just ask about it then, but then I thought no, I better just go on in as this just wasn’t right.”

White saw his doctor and he was sent for a mammogram and then a subsequent biopsy.

“They went in and took some of the tissue out, and about five or six days later I got the call saying it was cancer,” said White. “I just thought this is crazy, I’m a man, how do I have breast cancer?”

Before White was diagnosed, he never heard of a man having breast cancer.

“Gradually, I started seeing other men having breast cancer and it eased my thoughts because I wasn’t the only one,” said White. “My advice to other men going through this is to be strong and let them know there’s nothing to be ashamed of.”

I was lucky they found it early.

Patsy Shipman-Knight wanted to join the Army at 18, but her parents told her no and she listened. At 32, Shipman-Knight still wanted to serve her country and travel, so she made the decision to enlist. She left for bootcamp and was sent to Germany. She describes herself as the mother hen who kept all the young soldiers out of trouble.

Shipman-Knight is now 72-years old, and a few years ago, she was diagnosed with breast cancer at the Dallas VA Medical Center during a routine mammogram.

“I was lucky they found it early,” said Shipman-Knight. “Mammograms are so important and that’s how my cancer was caught.”

Shipman-Knight family has been her support system and have kept her spirits high.

“I was really upset when they told me it was cancer–I cried,” said Shipman-Knight. “The staff is taking very good care of me. I love every one of them. Once in a while my cheerful smile would go away, but I remain positive and it always comes back.”

U.S. Army Veteran Nelda Hanson battled breast cancer at the same time her husband of 40-years waged his own war with cancer. She recently celebrated five years of remission thanks to VA North Texas Medical Center.

Nelda Hanson is in her fifth year in remission and enjoys her days fishing on the lake, but this U.S. Army Veteran was diagnosed with stage 3 breast cancer with a very aggressive tumor in 2014.

“When the doctor said those words, you have cancer, it was like I was playing a game,” said Hanson. “It just didn’t seem real.”

Hanson brought her older brother with her to her appointment that cold day in December as he was her support system and also a minister.

The doctor told Hanson is was good that it had been caught in time.

“There should never be any excuse to forget to schedule a yearly mammogram,” said Hanson. “If your primary care physician forgets, remind them that you need to get it done.”

VA recommends women get yearly mammograms by age 45 and every other year beginning at age 55.

In a tragic twist of fate, as Hanson was waging her own war with breast cancer, her husband was also battling his own cancer.

“I beat breast cancer but lost my husband of 40-years to his fight with cancer,” said Hanson. “I’m a survivor, that’s for sure.”

Early detection is the key to beating breast cancer. VA North Texas does some 6,000 mammograms per year, with 1-2 breast cancer diagnoses per month. Two of those Veterans diagnosed per year will be men.

Resilience, hope, technology and empathy give these Veterans a way forward when life throws cancer at them and those they love.

“I’m grateful for the experience here as the Veterans teach you a lot about the human spirit,” said Dr. Soume Foshee, VA North Texas Radiologist. “They are put up against a lot of struggles in life and yet they help each other out. I feel I get as much from them as they get from me as their physician.”