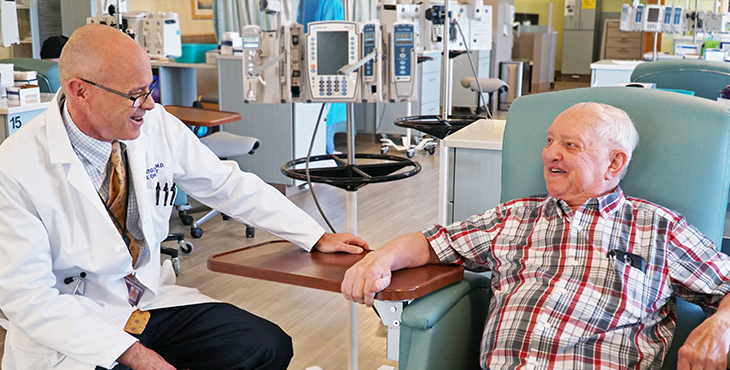 While in treatment for aggressive prostate cancer at the VA Puget Sound Health Care System in Seattle, Navy Veteran Allen Petchnick faced a daunting situation. His PSA blood test, the main screening tool for cancer of the prostate, had risen to 13, which for him was dangerously high. Plus, his cancer had spread to other parts of his body.

“He was looking at very tough outcomes,” says Dr. Bruce Montgomery, an oncologist at VA Puget Sound. “He was passing out because his tumor had metastasized to lymph nodes in his neck, which was pressing against one of his arteries.”

Montgomery led a team that performed DNA sequencing on tissue from Petchnick’s lymph nodes. They spotted mismatch repair (MMR) deficient cells, which usually have genetic mutations that could lead to cancer.

Petchnick received immunotherapy, a form of precision oncology in which organisms in the body’s immune system are used to fight cancer. Now age 79, he’s been on immunotherapy drugs for nearly two years. His PSA level has become undetectable and the tumor continues to shrink, Montgomery notes.

“He went from basically being unable to get out of a chair to going shopping with his granddaughter in just one cycle of therapy,” Montgomery says. “He may be cured. But we’ll only know that when we stop his therapy, which is likely to happen soon. Right now, he’s very close to a complete response after looking like he was going to be in very difficult straits.”

“He went from basically being unable to get out of a chair to going shopping with his granddaughter in just one cycle of therapy.”

Petchnick is one of several success stories arising from a partnership between VA and the Prostate Cancer Foundation (PCF), a philanthropic group that funds research to prevent and cure prostate cancer. The partnership is speeding the development of treatment and cures for Veterans with aggressive—or metastatic—prostate cancer through precision oncology.

The process involves the molecular profiling of tumors to identify genetic mutations that can be targeted through means such as immunotherapy or chemotherapy. Targeted therapy attacks the genes, proteins, or other biological elements that are specific to a tumor and make it grow.

VA and PCF signed the agreement in 2016 and put it into action early this year. It comes at a time when more than 16,000 Veterans are diagnosed each year with prostate cancer, making it the most common solid tumor cancer among Veterans.

Rebecca Levine, national director of PCF’s Veteran health initiative, says the foundation felt compelled to partner with VA also because some of its board members are Veterans who had life-extending results after participating in prostate cancer trials. “Those patient stories made it very clear to us in a personal way why this is so urgent and how transformational the opportunity to partner with VA can be,” she says, “given what PCF brings to the table in science and what VA brings to the table with its large patient population.”

In Bruce Montgomery’s view, PCF decided that investing its research dollars in a national integrated health care system like VA would provide the most impactful return.

“There was obvious interest on their part in precision oncology,” he says. “They also saw VA’s resources with regard to integrated data and clinical elements as something that could in the big picture and over the long term provide critical insights into how we might reach men who have advanced prostate cancer and give them the best access to health care.

“The whole idea behind this effort was to stand up an integrated precision oncology system in VA and show that if we can do this in the biggest health care system in the U.S., then the optimal efficiency and outcomes can be extended outside of VA and provide better results for everybody.”

PCF donated $50 million to VA in the five-year partnership. It calls for increasing the number of VA facilities that are doing precision oncology and prostate cancer clinical trials, raising the number of VA researchers applying to PCF for funding, and getting more Veterans enrolled in studies. About half of the funding is aimed at building a network of VA sites that are doing precision oncology. The network now includes 10 sites: Washington; Philadelphia; Seattle; Los Angeles; Ann Arbor, Michigan; Durham, North Carolina; Tampa, Florida; Bay Pines, Florida; and New York City, in Manhattan and the Bronx. The goal is to eventually have at least one network site in each of the 21 VISNs (Veteran Integrated Services Networks) into which the VA health care system is divided.

To read a longer version of this story, visit the VA Research website.