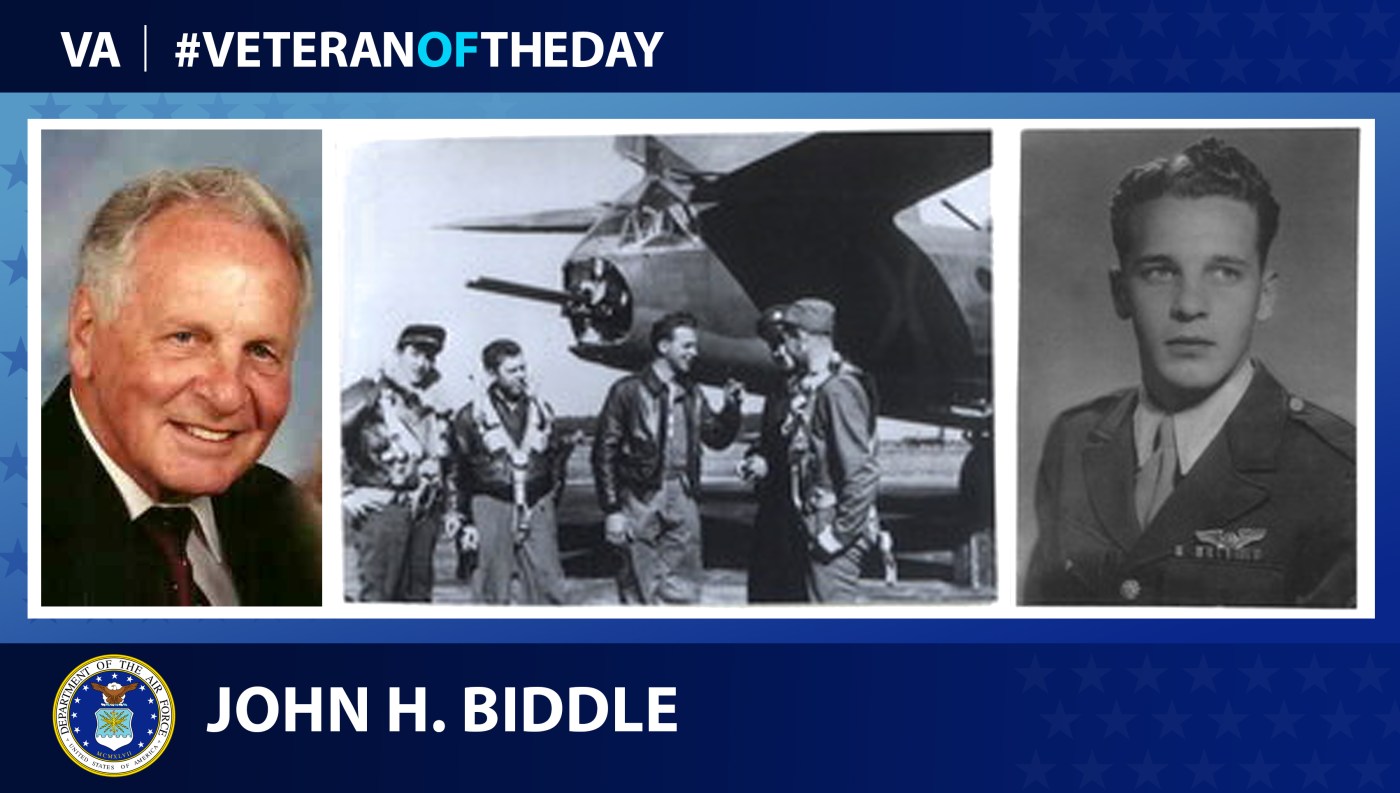 Today’s #VeteranOfTheDay is Air Force Veteran John H. Biddle, who served during World War II, the Korean War, and the Vietnam War from 1942-1966.

John Biddle enlisted into the Army Air Forces in January 1942, a couple of months after Pearl Harbor. He originally worked as a draftsman for 10 months, but Biddle wanted to fly. He earned that opportunity in England. Biddle became an engineer-gunner with the 453rd Bomb Squadron and would go on to fly 49 missions.

It was during one of his missions when Germans shot down Biddle and his crew over France in May 1944. The Germans took him as a prisoner of war to Frankfurt. He described Frankfurt as bombed, full of rubble and devoid of life. His bed and pillow were sawdust-filled burlap sacks, and he wore the clothes in which he came. His captors let Biddle write a 25-word letter to his family to let them know that he was alive and as well as he could be. In Frankfurt, he stayed in an interrogation center. When the Nazis knew that they would get nothing out of him, they moved him to a transit camp north of Frankfurt.

In this transit camp, Biddle and the other prisoners of war received a parcel from the Red Cross. Biddle likened this scene to Christmas and later remarked that he never felt better in all his life. They continued moving eastward, and Biddle ended up in a camp that was not far from Gdansk, Poland, for eight months. There were 11,500 people imprisoned there, all Army Air Force. As the Soviets made their way across Europe, the Germans moved the prisoners of war toward the Western Front. The move ended in March of 1945, in a small German town between Bremen and Hanover.

On April 16, the guards and prisoners of war heard gun clatter about a mile west of the camp. An old German guard climbed the tower, looked over to see what was happening, and on his way down, he took off his gun and exclaimed “Alles ist kaputt!” or “Everything is broken!” For Biddle, this meant that he was free

He temporarily returned to his old group, then stationed in France. On May 8, he returned home to the U.S.

Biddle would go on to also serve in the Korean and Vietnam wars. He retired after 24 years as a chief master sergeant. After Biddle’s service, he would speak at many Veteran’s events, Prisoner of War-Missing in Action events, and even sometimes schools.