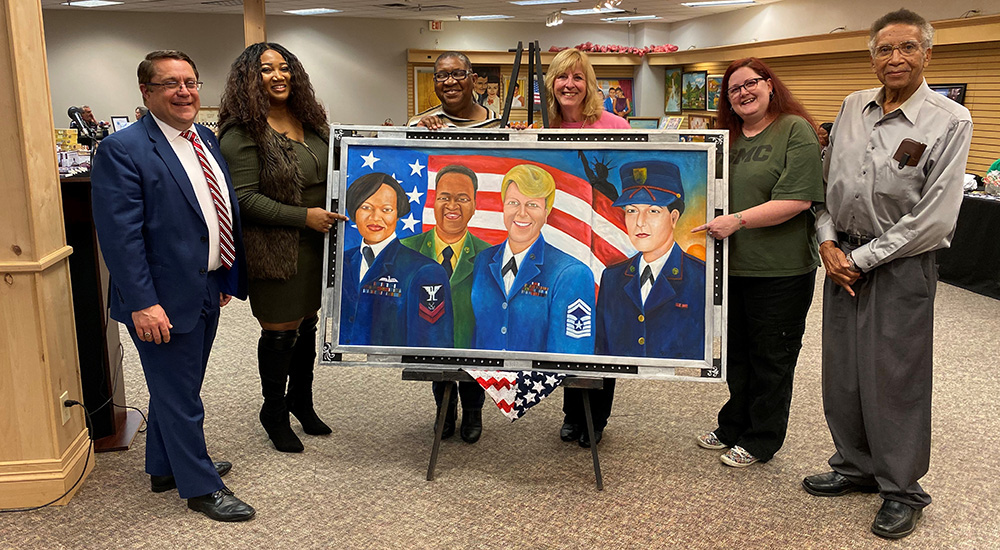 There may be no greater honor for a Veteran than having her likeness displayed for hundreds to see. But it is a greater recognition when a permanent display is prominent for thousands to observe over time.

Painter and Korean War Veteran Broadway Swim honored four women Veterans recently when he unveiled his work of art before a crowd that had gathered at a local mall.

The large painting will find its home in the new Shreveport VA women Veterans clinic. The dedication ceremony is scheduled for late spring or early summer 2020. The presentation was the culmination of several weeks of gathering military photos, several tubes of oil paints and brushes of various sizes, and a creative artist’s mind blending a mix of patriotism and uniform accuracy.

In the photo above, Swim (right), stands with the four women Veterans featured in the artwork. Medical center director Richard Crockett (left) accepted the donated painting.

“I have a few touch-ups to include the eagle, globe and anchor on the Marine’s service cap,” said Swim. “But we wanted to present the painting to the VA hospital during November, National Veterans Month.”

“I’m involved with Veteran programs and I asked if he would paint something for women,” she said.

“I was glad to do it,” remarked Swim. “These women have gone far beyond the call of duty. It was a choice to serve, and service is one of the greatest things anyone can do in America.”

“I am proud to have painted these women Veterans”

Swim, a Veteran of the Army and Air Force, stated, “No one is greater than their source and we all came from a woman. I am proud to have painted these women Veterans.”

“We are so proud to display this women Veteran’s portrait,” said Crockett. “When I arrived to receive the donated painting, I was amazed at the artist’s ability to capture the personalities and likenesses of these women Veterans. They are heroic and they receive their care at the Shreveport VA.

“These women have gone far beyond the call of duty.”

“I am now even more excited about opening the new women’s clinic. We will display the painting proudly, prominently and appropriately for all Veterans to see.”

The women Veterans in the painting are (from left to right):

The new Women Veterans Clinic will expand from a current space that is around 1,500 square feet to an area of almost 7,000 square feet.

The women’s clinic allows for improved access, comprehensive primary care for Women Veterans and more exam room space, among many other modern features.