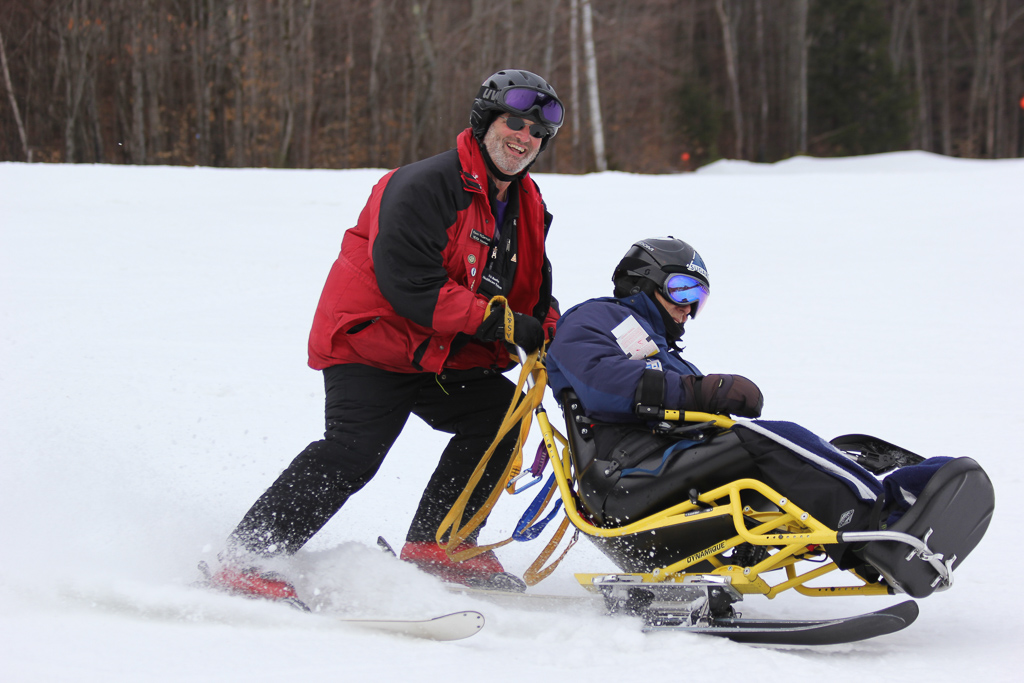 Fifty years ago, Paul Nyerick served as an artillery forward air observer during an 11-month tour in Vietnam.

Thinking of skiing down a mountain in New Hampshire at that time was the furthest thing from his mind.

Growing up in Connecticut, sports were always an important part of his life. He learned to ski at a young age at nearby Mount Southington. But after being diagnosed with multiple sclerosis in 1991, he knew he’d need assistance to enjoy outdoor recreation again.

This is why Nyerick says the New England Winter Sports Clinic for Veterans with Disabilities is so important. After his combat service in Vietnam and with MS, every day outdoors, he says, is a special one.

Nyerick was one of 55 Veterans from eight states and Puerto Rico who participated in the clinic this week at Mount Sunapee in Newbury, N.H.

It was the 23rd year the New England Healing Sports Association has partnered with the VA New England Healthcare System to host a week of adaptive sports such as skiing and sled hockey.

“It’s very cathartic and you can get a lot out of it,” said Nyerick, a bit out of breadth after completing a run down South Peak at Mount Sunapee. “It bolsters your confidence and once you get out here you can forget everything except for the next turn.”

Nyerick made all the turns down the peak while seated in a bucket chair over two skis designed for people with intact lower legs but who have minimal control over them.

“You have to be set up right; if you’re not even (balanced) in the bucket, you’re all over the place,” he said.

He came to a stop with the help of outriggers or shortened poles, his own upper body strength and the assistance of volunteers. Behind Nyerick was Ralph Marche, a seasoned instructor and former VA chief of Voluntary Services at the VA Boston Healthcare System and the co-founder of NEHSA, a charitable 501(c)3 organization, located at Mount Sunapee.

NEHSA was formed in 1972 as injured Vietnam-era Veterans were returning home, searching for ways to reintroduce skiing back into their lives.

Marche remembers the day when a Vietnam Marine Corps Veteran, Tony Santilli, came into his office at the VA medical center at Jamaica Plain, Mass. Santilli, whose leg was amputated after being wounded in Vietnam, wanted the freedom of being able to ski again.

Santilli, who died in 2016, sought Marche’s help to start a program. “He said, ‘Hey, I hear you’re the guy to talk to,’” Marche remembers. “He said, ‘We got snow, we got mountains, we got Veterans. Why do I have to go anywhere but New England to ski with my fellow Veterans?’”

Marche took Santilli’s charge and met with a local ski school director in New Hampshire. The small program grew from Tony and a few other Veterans to more than 50 Veterans today.

A physical or mental disability may seem to be like a big roadblock to participating in outdoor recreation for many Veterans with physical, cognitive and developmental disabilities, but the winter sports clinic makes adventuring outside accessible, and, the Veterans say, fun.

“People don’t realize how much this heals people,” said Marche.

When John Bacon, a Vietnam Veteran with a spinal cord injury, participated in the clinic in 2018, he said the experience saved his life. He realized he wasn’t alone.

Now he encourages other Veterans like him to get started and to meet with their VA recreation therapy program about how to be active and to experience life to the fullest.

“You don’t know what you’re missing,” he said he would tell any Veteran. “You want to come see us and enjoy. Get outside the box because the box is going to be really big.”

Now, with more and more Veterans returning from the wars in Iraq, Afghanistan and Southwest Asia and other post 9/11 Veterans coming home, they are starting to take full advantage of the clinic, which promotes rehabilitation through recreation.

The program also allows Veterans to come together as a community through winter sports, said Dustin Siroka, who was injured in 2004 and completely paralyzed while serving in the Marine Corps. He had to learn how to walk all over again.

He credits Marche, who was then still working at the West Roxbury VA Medical Center with the motivation to start recreational therapy. The support, persistence and determination is what ultimately got him back on his feet, he said.

He hasn’t missed a Mount Sunapee winter sports clinic since, and he’s also attended the National Winter Sports Clinic in Colorado. He’s improved so much that a few years ago he decided he would stop attending as a Veteran participant and attend instead as a volunteer – helping other Veterans face the same challenges he did.

An athlete his entire life, Siroka said the clinics gave him the confidence he needed to try sports again. And he loves the opportunity to connect with other Veterans through shared experiences.

“In this program, we encourage pushing – pushing you to your limits and getting you out of your comfort zone,” he said.

All week long, Veterans were able to hit the slopes with skis, snowboards or other adaptive recreational equipment with the purpose of giving each person a sense of independence. Seeing the joy on the faces of Veterans achieving that independence is the greatest satisfaction a volunteer can receive, said Siroka.

Other events at the clinic this week included sled hockey, kayaking, massages and a wheelchair basketball game against a local fire department.

To participate, disabled Veterans enrolled in VA health care begin by seeing their VA recreation therapy staff. They then create a plan that includes attending the clinic, said Jenny Vulpis, an adaptive sports case manager and certified recreation specialist with the VA Boston Healthcare System. Vulpis is the lead organizer for the clinic.

The clinic is a total team effort with NEHSA, said Jason Gray, chief of Voluntary Service and Recreation Therapy with the VA Boston Healthcare System. The team includes 20 VA staff members from all across the VA New England Healthcare System, more than 130 volunteers and community support that includes 25 major sponsors.

“We have an amazing community that supports this week,” said Gray, who said members of the public can contact any VA Voluntary Service office to learn more about how to contribute and help grow programs like the clinic.

“Just to see how far people have come after coming to the clinic and seeing the effects it has had on their lives is great and, for me, it’s overwhelmingly rewarding,” said Carly Bascom, NEHSA director.

For both VA and NEHSA, the hope is that more Veterans find out about the clinic and what can be achieved.