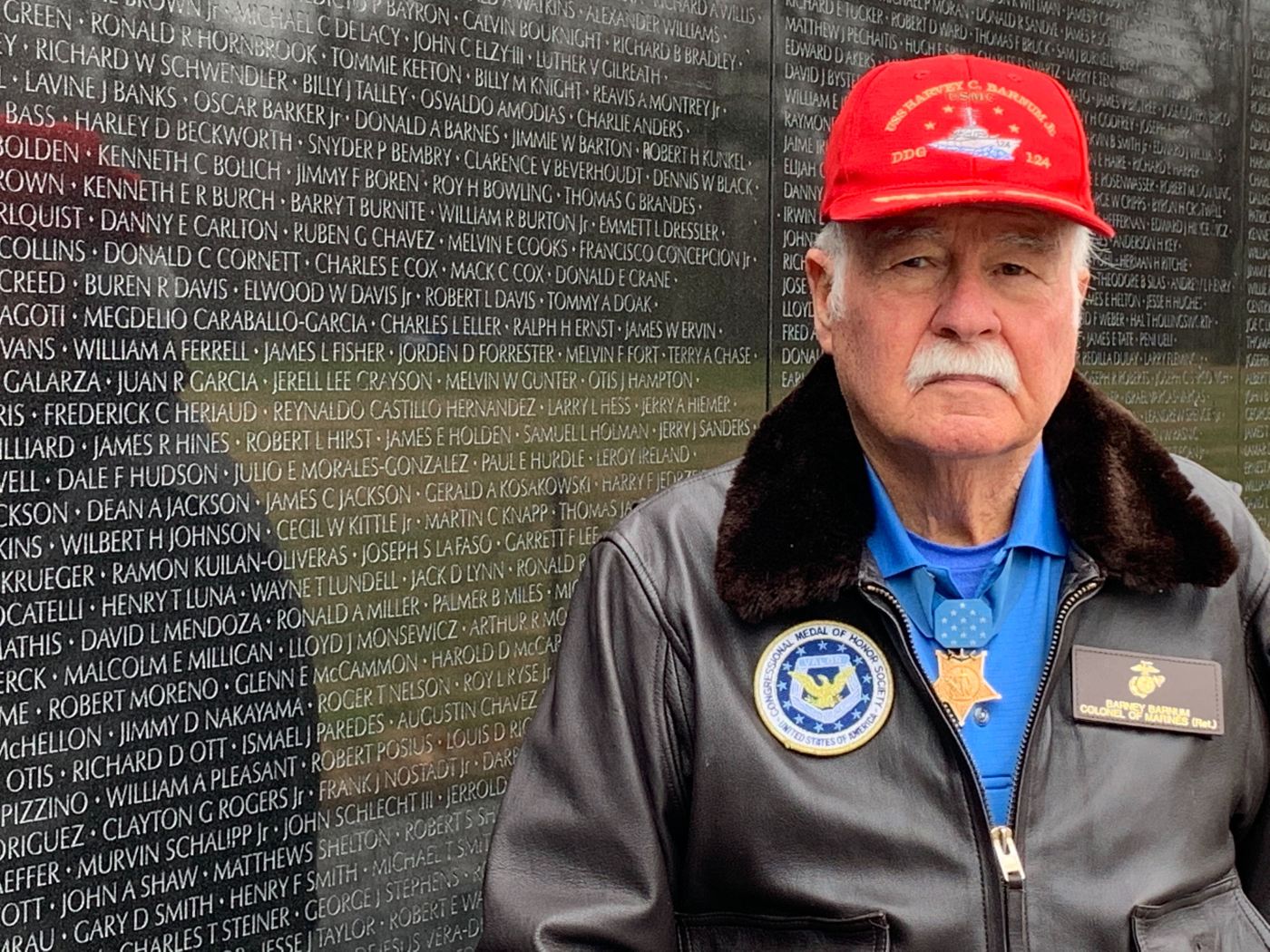 As Vietnam War Veterans Day approaches on March 29, one era and Medal of Honor recipient said Veterans should participate in events.

Barney Barnum is a retired Marine Corps colonel who served two tours in Vietnam. He said Vietnam War Veterans Day is an opportunity for Vietnam Veterans to show pride in their service. He also said the day is a chance for the public to thank Vietnam Veterans.

For Barnum, he said March 29 is a day to reflect.

“I think it’s a chance for Vietnam Vets to pause and reflect on who they are, what they did, what they accomplished, and to think about the guys who fought on their left and their right,” he said.

Barnum said while Vietnam was an unpopular war at the time, American efforts led to the fall of communism as the U.S. knew it, including the Berlin Wall in 1991. For that, he said Vietnam Veterans deserve a thank you and a handshake.

He added that attending and participating in these events are a chance to honor fallen brothers and sisters.

“If you see events are going to be staged and conducted and you’re within a reasonable amount of travel time, you ought to go,” he said. “By going there, you may feel good about it, but you’re also going to be representing the Soldiers, Sailors, Airmen, Marines and Coasties that can’t go because they paid the ultimate sacrifice. So, as a sign that their lives were not lost in vain, show up and go arm-and-arm for those who are not going to be able to be there. It will show a little bit of unity and, who knows, you may bump into buddies you haven’t seen in 50 years.”

For the public, Barnum said the day is an opportunity to ask questions and listen.

“Stop talking and listen to some of these guys when they start to talk, and hear what they’re saying,” he said.

He said listening can help people understand Veterans and how they overcame fear, demonstrated courage and showed both service and sacrifice by serving the country in harm’s way.

“Maybe people will say, ‘You know what, these guys did a good job and I ought to thank them,’” he said.

Barnum encourages Vietnam Veterans to visit these memorials. He said his first visit was on a snowy, 2:30 a.m. trip enroute back from a banquet in Washington, D.C. As he walked to the wall, a group of a dozen college kids heading north to go skiing recognized Barnum. He talked to them for about two hours about his service, which opened up some long-suppressed feelings.

“It helped,” he said, adding that talking about service is easier than holding onto grief. “A heavy load is easier to carry if you split it up,” he said.

Barnum said he visits the wall frequently and experiences a wide range of emotions. The hardest times are on a beautiful day, when he sees his reflection over the name of a fallen service member. Despite those times, Barnum said visiting the memorial is important to pay tribute to fallen comrades.

“I think the beauty of the wall is its simplicity,” he said. “I like the logical order of people who are listed on the wall by the order that they gave their life in support of this great country. It makes you realize the sacrifices our young warriors made in Vietnam.”

Barnum arrived in Vietnam in December 1965, serving with 2d Battalion, 9th Marines. Within days of his arrival, he was on an operation coming out of the mountains near Ky Phu. His company provided rear security for the battalion movement out of the mountains. The enemy ambushed the entire battalion, killing the company commander and radio operator.

Barnum said he assumed command of Hotel Company, who “didn’t even know my name,” having served with them five days. Calling in artillery fire, Barnum raced out to recover the dying commander and radio. He then led the unit throughout intense battle. They eventually broke contact with the enemy and joined up with the remainder of the battalion.

After receiving the Medal of Honor in 1967, Barnum requested to go back to Vietnam, returning in 1968. Barnum built over a dozen fire bases while serving as a battery commander during Operation Dewey Canyon.

“People say ‘Thank you for your service,’” Barnum said. “My comment is, ‘It was an honor to serve.’ I think that’s the reason I wanted to go back. I’m a Marine.”

Started in 2012–the program will run for 13 years, culminating in 2025–the Vietnam War Commemoration honors and gives thanks to all Vietnam Veterans. In 2017, March 29 officially became National Vietnam War Veterans Day.

More than 11,000 commemorative partners conduct events in their local communities throughout the year to recognize Vietnam Veterans and their families. People can learn about events in their local community by visiting https://www.vietnamwar50th.com/events/. Visitors can search for event by name, date, country, zip code and category. The site also allows visitors to search within a 1-100 mile distance of a zip code. Vietnam War Veterans Day is March 29, but organizers stage events throughout the year.

Even though Vietnam War Veterans Day is about thanking Veterans of that era, Barnum said Veterans also should think about serving others. Barnum said continuing to serve fellow Veterans is important because it’s a way to say thank you, give back and appreciate what they’ve done. He continues to serve, helping with the Marine Corps-Law Enforcement Foundation and visiting Veterans near his Northern Virginia home.

“There are times if I’m down in the dumps, I’ll get in the car and go over to Bethesda (Walter Reed National Military Medical Center) and visit troops on the ward,” he said. “I get all fired up because they are magnificent bastards. They really are. I’m so proud of them for all they’ve accomplished.”

By Adam Stump is a public affairs specialist formerly with VA's Digital Media Engagement team. He is a retired Air Force Veteran who served 20 years, including two deployments to Afghanistan for detention operations and special operations.