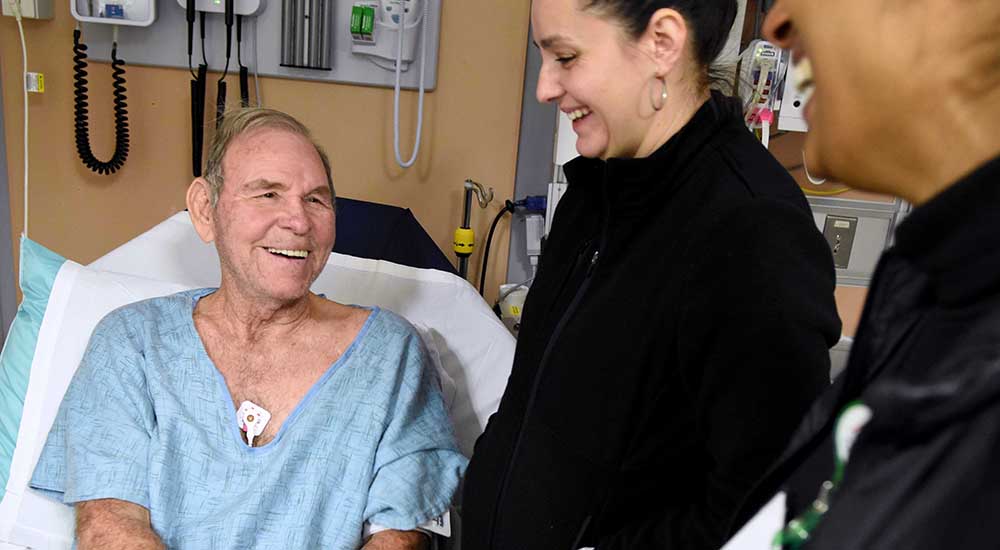 “I was having a hard time breathing and was feeling really weak and sick,” said Pair, an Army Veteran.

As a result, Pair became the first patient to be admitted into the new clinical decision unit (CDU) within the emergency department. That was in January 2020.

The CDU is a specialized unit for Veterans who visit the emergency department and require further observation and management to determine their need for inpatient admission.

In the photo above, Pair talks with Katy Wood, nurse practitioner, and Suni Jacob, RN, in the new CDU.

“The CDU will be emergency department run and physician managed for patients who we anticipate to require less than 24 hours of observation and who are ambulatory,” said Dr. Stephen Burgher. Burgher is chief of emergency medicine at VA North Texas.

“These patients will be able to perform daily living activities and be free of active psychiatric conditions,” he said.

The CDU opened with eight staffed beds and six protocols.

The CDU will provide high-quality care for patients who require active and focused management during an expected length of stay of eight to 24 hours.

For his second visit in less than a month, Pair was able to head home after less than 24 hours.

“Everyone here was really awesome,” said Pair. “I told my wife that I didn’t know if I wanted to go home because they take better care of me here. The care I received was really the best I’ve ever received.”