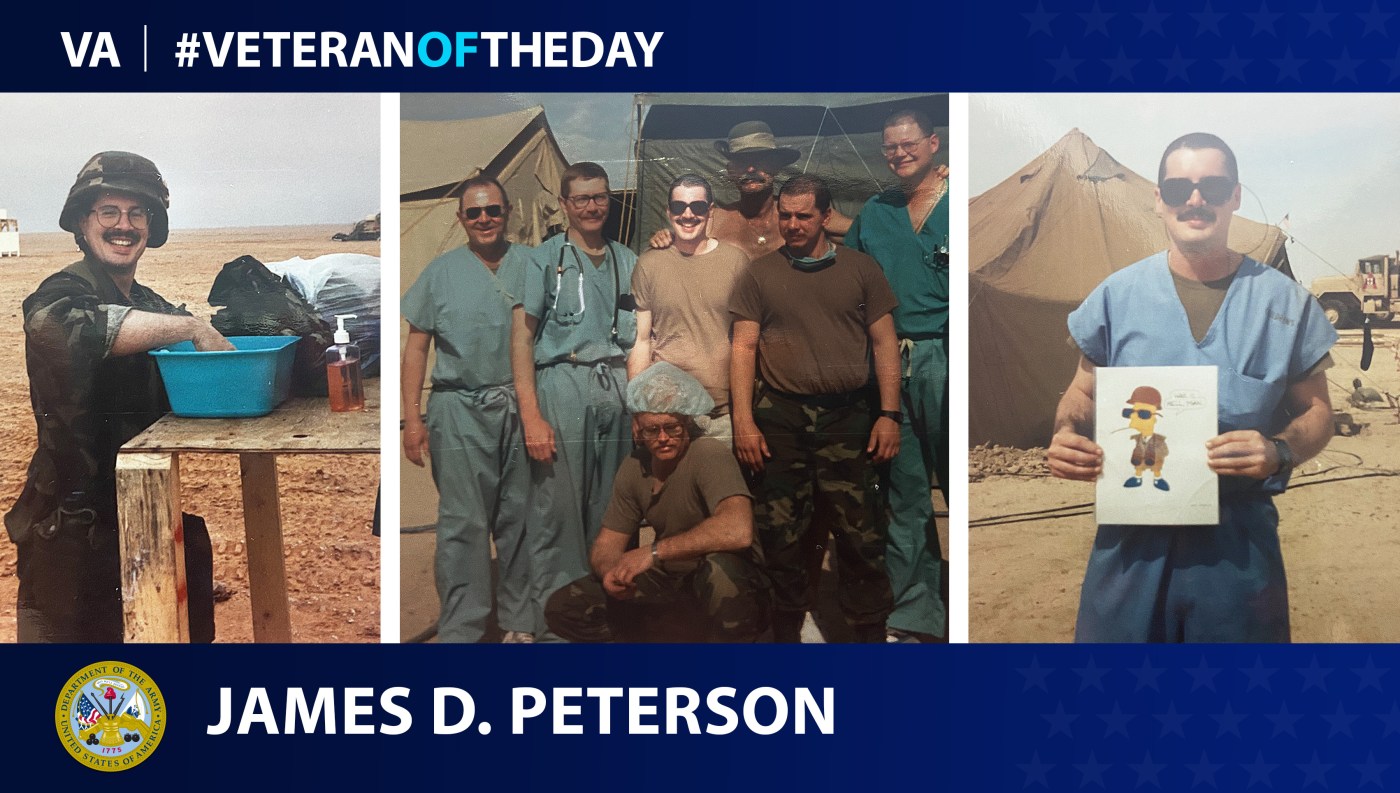 Today’s #VeteranOfTheDay is Army Veteran James “Dean” Peterson, who served as a nurse anesthetist in Iraq during Operation Desert Storm.

James “Dean” Peterson was born in Munich, Germany in July 1961. His father, a ­sergeant in the Army, then transferred to Brookfield, Missouri, as a recruiter, where Peterson grew up. In high school, he worked in Pershing Memorial Hospital as an orderly and wanted to be a doctor. He changed his mind after shadowing a certified registered nurse anesthetist, or CRNA. Peterson attended nursing school at St. Luke’s College in Kansas City, Missouri and received anesthesia training at George Washington University in Washington, D.C., earning his certification in 1986. At George Washington he learned about the student loan forgiveness offered by joining the Army Reserve. After getting a job in Kansas City, Peterson joined in 1987.

In 1990, Peterson activated and reported for duty the day after Christmas. He and several others traveled by bus to Fort Polk, Louisiana, where he served with the 159th Mobile Army Surgical Hospital (M.A.S.H.) unit. On Jan. 10, 1991, Peterson deployed to Saudi Arabia as part of Operation Desert Storm.

About six weeks after Peterson’s arrival, the ground war started in Iraq. The 159th provided medical assistance to injured service members and civilians. Medical supplies arrived two days before their departure; in the meantime, the unit built latrines and washed laundry. When they arrived in Iraq, Peterson became part of a forward surgical team to tend to the wounded on the front lines as quickly as possible, as he was unmarried and had no children. However, the ground war ended so quickly that the team never deployed.

Peterson said he happily helped people while in Saudi Arabia and Iraq. He said one of his many fond memories included Louisianan members of his unit who decorated a truck and dressed in costumes for Mardi Gras, just weeks before the ground war started. He spent just short of six months in theater.

Peterson discharged in 1995. He now lives in Columbia, Missouri, with his wife and works as a CRNA at the local VA hospital.