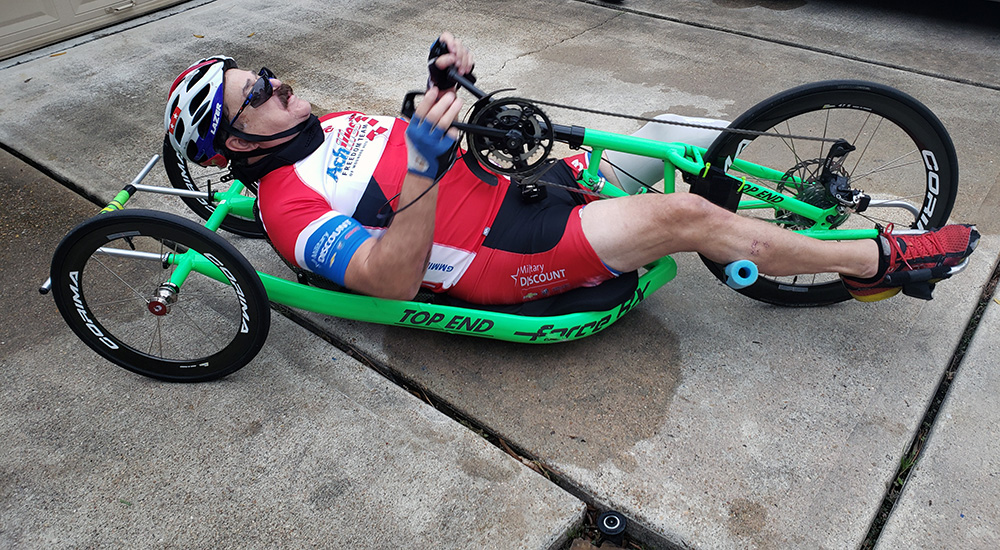 “I am convinced if I hadn’t been introduced to recreation therapy that I may not be talking to you right now,” said Weisbrod (pictured above). “It had gotten pretty dark. I was in a cave. This has helped me functionally get out of that cave.”

Weisbrod was injured in the line of duty and is an amputee. For 30 years, he didn’t do a lot. He couldn’t run or walk any distance and his mental health suffered as a result.

This changed when he received a prosthetic that allowed him to run. He ran until his orthopedics doctor at the Houston VA told him to stop due to knee damage.

“The biggest thing recreation therapy did for me is give me a focus.”

The recreation therapy staff directed Weisbrod to hand cycling. The sport has made a huge difference, both physically and mentally.

“The biggest thing recreation therapy did for me is give me a focus. I suffered from nightmares, insomnia and an explosive temper. Getting out there and exercising was the biggest boon to my mental health. It has made a significant difference in my life and my family’s life. I’m actually afraid to stop exercising now. I’ll probably hand cycle into the grave.”

Weisbrod now does 40 miles per day and 16 marathons annually. It allows him to stay active doing something he loves. And he wants other Veterans to know how recreation therapy can help them.

“The thing about recreation therapy is that it’s not pushy. They never say, ‘You have to do this or do that.’ If you have the desire, no matter your ability, they have resources to get the most out of what you can do. They start you off and see how it goes, and as you progress, the rec therapist progresses right there with you.”

The biggest challenge for many Veterans is getting out of the mindset of staying in their rooms and just watching television.

“Look, I was there. I was in that spot. It took my wife to make me take that first step and that is the hardest thing to do. If I talk to a Veteran, I can usually get them excited enough to try it.”

Houston VAMC Recreation Therapist Jemarques Handy is always on the patient wards and in clinics trying to encourage Veterans to get back in the game.

“Sometimes it takes Veterans years to accept the physical changes in their lives,” said Handy. “When they do, I’m here to show them how to continue to do the things they love with a few adaptations. It makes me feel proud to see Veterans take the education I give them and flourish in their sport.”

Todd Goodman is a public affairs specialist with the Houston VA Medical Center.