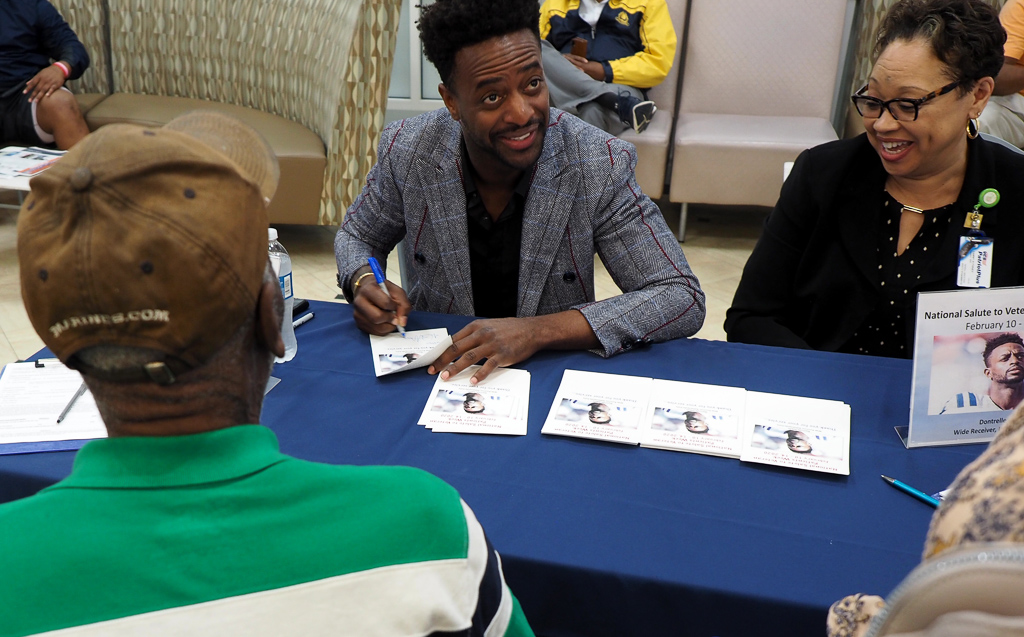 Among the guests, one stood head and shoulders above the others–literally: NFL player Dontrelle Inman.

Inman, who currently plays for the Indianapolis Colts, visited the Wm. Jennings Bryan Dorn VA Medical Center to meet with Veterans, thank them for their service and sign autographs.

Born in Charleston, Inman grew up in the Columbia area, graduating from Batesburg-Leesville High School in 2007. He played college football in Virginia before turning pro in 2011, signing with the Jacksonville Jaguars. Since then, Inman has played for the San Diego Chargers, Chicago Bears, New England Patriots and Los Angeles Chargers.

“This is the first time I’ve ever been in a VA facility, doing something like this,” Inman said. “This experience has been remarkable.”

Though Inman himself didn’t serve un uniform, he said he comes from a long line of those who have: his father served in the Navy, his uncle served in the Army, and one of his great grandfathers served in World War I.

“I feel like everyone, not just athletes, honor our Veterans because these are men and women who have risked their lives for us, and a lot of [Veterans] don’t feel appreciated.”

Doing more in the community

After signing autographs and posing for photos in the main lobby, Inman then visited some of the wards to visit Dorn VA’s hospitalized Veterans.

“There were some rooms I walked in and said to the Veteran, ‘You’re not forgotten, and I want to thank you for your service.’ It brought tears to their eyes,” Inman said. “I [began to think], ‘How can I do more?’ and “What initiative can I take to get word out there?” he asked.

Inman expressed interest in starting an annual event for the local community to honor its local Veterans.

“I know we already have a Veterans Day to honor Veterans, but more people need to see how far a ‘Thank you’ goes.”