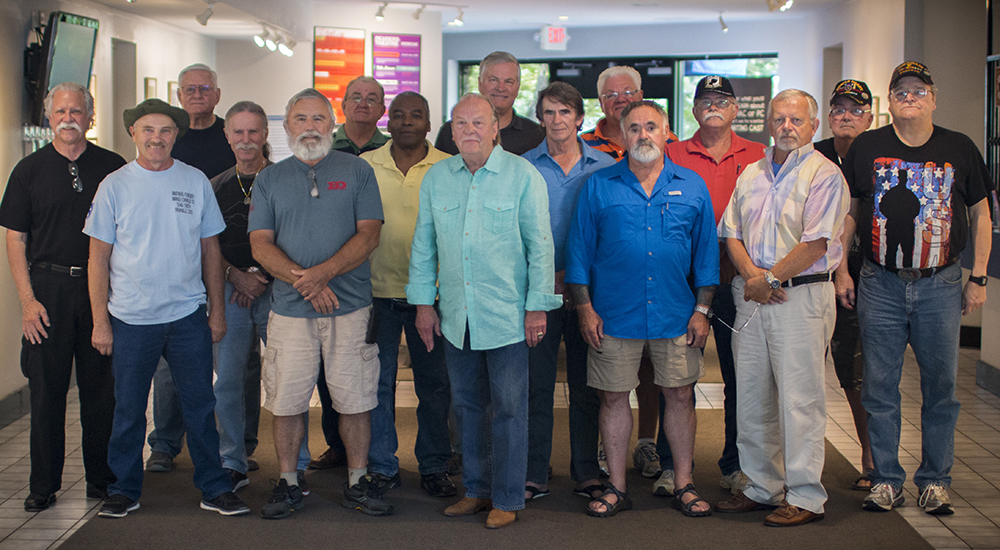 That’s the view of Dr. Bruce Kelly, assistant chief of Primary Care and lead for the Creative Writing Program at the Charles George VA Medical Center.

“Writing programs for Veterans have existed since the Second World War to help them make sense of their military experience. It’s a way to honor the voice inside wanting to be heard,” Kelly said. “Writing about the experiences of combat and its impact helps organize what’s banging around inside. It can with time soften the grip that holds power over those who’ve seen the horrors of war.”

To help Veterans who’ve suffered from PTSD for 50 years, Kelly, along with former North Carolina Poet Laureate Joseph Bathanti, professor at Appalachian State University, began planning a creative writing program back in 2014. They both keenly felt the unmet moral obligation we as a nation have to this cohort of veterans.

“Veterans told me they were reluctant to bring the war back up,” Kelly added, “that creative writing seemed like a ‘cockamamie idea,’ that they couldn’t write, had trouble spelling, bad experiences with groups and more. But they gradually spoke about the wounds that haunted them and were often ready to try anything that might help.”

The Veterans pictured above were the first to participate in the creative writing sessions.

Picked up their pencils and began to write

Kelly said he, Bathanti and the Veterans were all nervous when they met for the first time.

“It was something new and untried for all of us,” he said. “As their physician, I was maybe more uneasy than any, knowing how hard they worked to control what haunted them. They were understandably anxious about the writing and opening up in deeply personal ways to a group of strangers.”

Kelly said that after handing the first session over to Bathanti he went to the back of the class to watch the men’s expressions and body language. He was ready for anything, including some walking out.

A film writer couldn’t have scripted what he saw next.

When they were asked to begin writing, in unison they picked up their pencils, put their heads down, opened their notebooks and began to write without a moment’s hesitation.

My family understands me now

When asked how the program has helped them, one Veteran wrote that, “My relationships with my family have improved since they’ve heard my writings. They understand me better now, and I better understand my moral injury. I’ve connected with Veterans who share my experiences and built new friendships. I’ve been able to express thoughts and feelings held in for 50 long years.”

Eighteen of the Veterans agreed to participate in a staged reading at Asheville Community Theatre titled “Brothers Like These.” They performed later that year at Appalachian State to a standing-room-only crowd of students and teachers. The full staged reading has now been performed at eight locations across North Carolina.

On each occasion the audience was deeply touched, many in tears, but always leaving with a new understanding and respect for all who served in combat. The men felt honored, empowered and found a voice they didn’t know they had.

The standing ovations they received provide some sense of the long overdue welcome home they were denied by a country deeply divided on their return.

Bathanti says that in 41 years he’s never seen writing transform lives so deeply. He and Dr. Kelly often refer to it as the “Church of Classroom B” (where they meet), due to the work of the soul and deep collective reverence they’ve witnessed there.

A writing program for women Veterans began last fall with a second group planned for the spring.