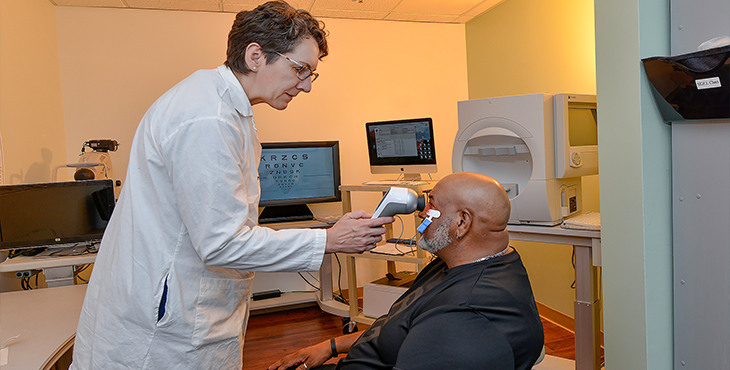 A recent VA pilot study shows promise for early detection and treatment of an eye disease that affects many with diabetes. About a quarter of VA patients have diabetes.

Anyone who has the disease can develop diabetic retinopathy. It involves damage to the light-sensitive tissue in the back of the eye—the retina.

Diabetic retinopathy is a leading cause of blindness among working-age Americans. “This means vision loss is disrupted when these people are at the peak of their wage-earning potential,” says Dr. Machelle Pardue. She is associate director of the Center for Visual and Neurocognitive Rehabilitation at the Atlanta VA Medical Center.

Pardue recently led a pilot study of a hand-held electroretinogram (ERG) device to detect pre-clinical, or early stage, diabetic retinopathy. The study also looked at the drug Levodopa—usually used for Parkinson’s disease—to treat patients with early signs of the condition.

Pardue and her team found that the device, the RETeval, has the sensitivity to detect early retinal problems in diabetic patients prior to “clinically recognized vascular changes.”

“These data demonstrate the potential to use this approach as a new screening method for diabetic retinopathy that would detect retinal defects much earlier than the currently used fundus photography,” the researchers write. That procedure calls for photographing the rear of the eye and recording activity in the retina.

The researchers also determined that Levodopa can restore retinal function to normal within two weeks and can continue to provide benefit for at least two weeks after treatment.

The results appeared online in February 2020 in the journal Diabetes, published by the American Diabetes Association.

“Let’s say we’re able to detect diabetic changes in the eye within the first five years,” says Pardue. “That’s still around 10 years before it’s clinically diagnosed. That’s a big difference. When you’re at that late stage of the disease, a lot of drugs, no matter how good they are, just aren’t going to be able to treat it effectively because the disease has progressed too far. So there are sweet spots where diseases are reversible and treatable.”

To read more about the study, visit VA Research Currents.

Photo at top: Dr. Machelle Pardue performs an electroretinogram on Army Veteran Michael Brooks, who participated in her study. (Photo by Joey Rodgers)