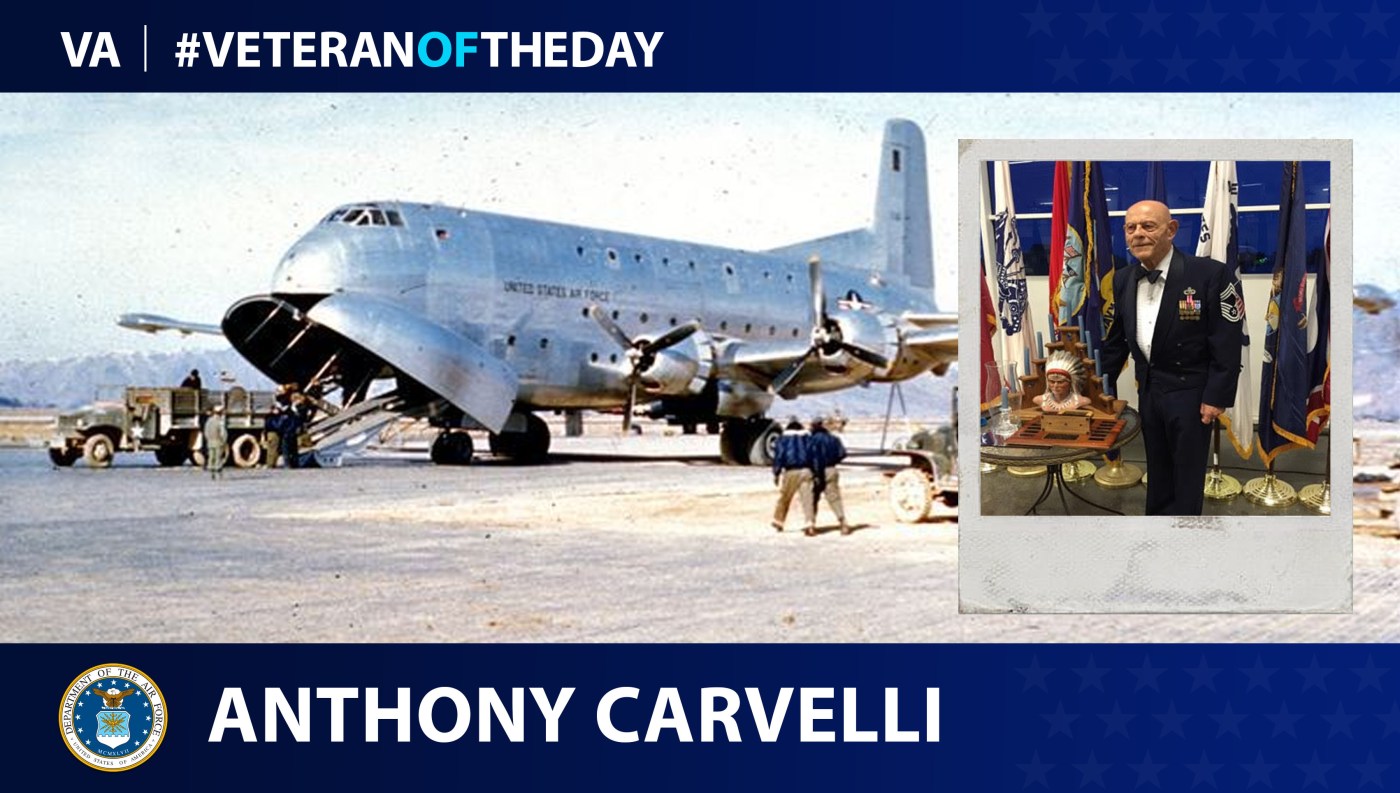 Today’s #VeteranOfTheDay is Air Force Veteran Anthony Carvelli, who worked on aircraft and mechanical maintenance during a career spanning 41 years.

Anthony Carvelli grew up in Brooklyn, New York and after graduating high school, he enlisted in the Air Force in 1951. Following basic training, he went to Keesler Air Force Base, Mississippi, to attend an electronics training school. Afterward, Carvelli deployed to Tachikawa Air Force Base in Tokyo, Japan, in 1952. During the Korean airlift, he worked on the repair and maintenance of radar systems for C-54 and C-124 aircraft.

After returning to the U.S. in 1954, Carvelli transferred to the Air Force Reserve and served on numerous bases as a maintenance worker for aircraft. At Maxwell AFB, Alabama, he worked on the radar systems of KC-97 refueling planes. He later went to Floyd Bennett Naval Air Station, New York, to work on airborne radar and radio systems of C-119 aircraft.

In the 1960s, Carvelli served at Stewart, Bolling and Mitchell AFBs, working on planes in the 336th Military Airlift Squadron. While at Stewart, Carvelli’s unit deployed to Elmendorf Air Force Base, Alaska, to assist in recovery efforts following the “Good Friday Earthquake” of March 27, 1964. He later went to England and supported refueling planes at Mildenhall Air Base.

Following the January 1968 USS Pueblo incident, Carvelli went active. He deployed to Kunsan AFB, South Korea, in anticipation of military conflict. Carvelli was the shop chief, working on F-100 aircraft. After release of the USS Pueblo crew in December 1968, Carvelli returned to the U.S. and went to Hamilton Air Base, California. He served as branch chief over all avionics shops on C-124 and C-130 aircraft.

Carvelli later worked at Mather AFB as the avionics branch chief of KC-135 tanker aircraft and at McClellan AFB as the manager of the management and procedures aircraft maintenance division for Fourth Air Force. He retired from the Air Force Reserve in 1992 as a chief master sergeant.

Carvelli advises military retirees with Medicare on TriCare for Life and the military pharmacy program. Additionally, he serves as a volunteer at the Military Retiree Office in Sacramento, California, and with the Knights of Columbus.