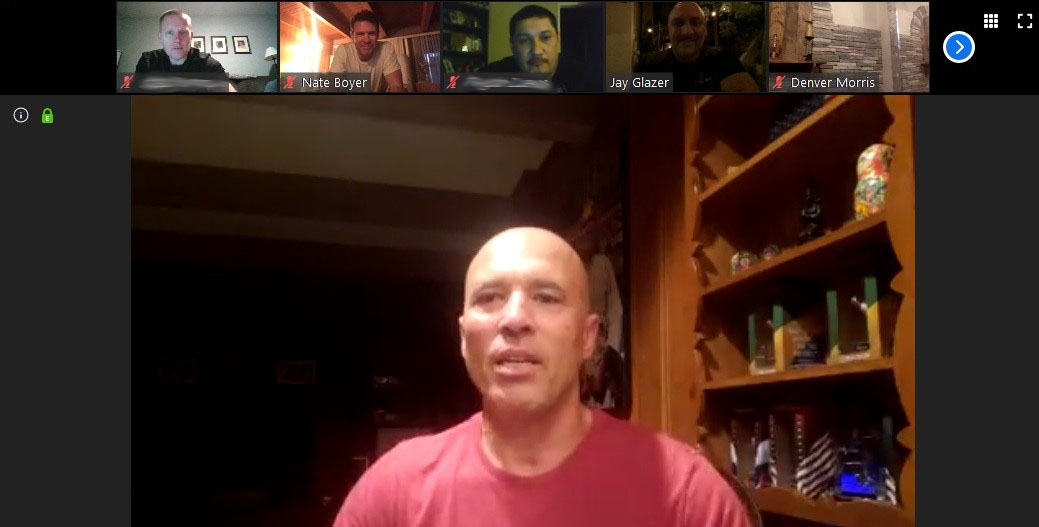 Combat Veterans and former professional athletes are coming together online for exercise and peer support through Merging Vets and Players.

A trainer leads online participants through a workout during a Merging Veterans and Players session April 15.

“Here’s what we hope to show the world, we don’t have to isolate,” Glazer said. “We actually came up with a better term for ‘social distancing’ and that’s ‘physical distancing while staying socially connected.’”

A recent virtual session captured the essence of the group. More than 60 people joined the session, a mix of combat Veterans and former professional athletes.

The sessions start with a 30-minute workout, including a brief warmup of jumping jacks, squats and knee hugs. Following the warmup came the meat of the workout, which included shadow boxing, push-ups, planks and squats.

The exercises use body weight, so Veterans who aren’t in the same shape since their military service can adjust the workouts. By the end of the session, everyone sweated, no matter the adjustments.

Following the workout is The Huddle, an hour and fifteen minutes of peer-on-peer support. The Huddle is where both Veterans and players share their challenges in transition and offer each other support and resources.

During the session, both Veterans and players spoke about the challenges they faced and overcame. Veterans spoke about the difficulties isolating during coronavirus. One Veteran held his months old child and apologized for the baby crying, only to reveal he was on “daddy duty” because his wife was hospitalized, awaiting coronavirus testing results. After his announcement, messages from both Veterans and players poured in over chat and video to help him and his family.

Players also shared. One player talked about struggling following a particularly difficult defeat at the end of his career. The player battled depression because he knew he might never get to play again, forcing him into transition earlier than he expected. That resonated with some Veterans, who also know the difficulty transitioning from military service to civilian status and the battle with depression.

Veterans and athletes meet up virtually using Zoom. Anyone interested must have a phone or computer, along with internet access.

The program is free and open to Veterans who served on active duty in a theater of combat operations (service in a war, or campaign expedition in hostile waters, and or on foreign soil that rated Hostile Fire Pay or Imminent Danger Pay).

Veterans must provide proof of eligibility, which can include an authorized campaign medal, receipt of Hostile/Imminent Danger Pay (verified by a military pay statement), or service in Korea for 30 consecutive or 60 non-consecutive days. This information is usually available through a DD-214.

Veterans can sign up online at https://www.vetsandplayers.org/join. Once they fill out several questions, they receive a follow up email, which requests proof of eligibility.

Disclaimer: The sharing of any non-VA information does not constitute an endorsement of products or services on behalf of VA.