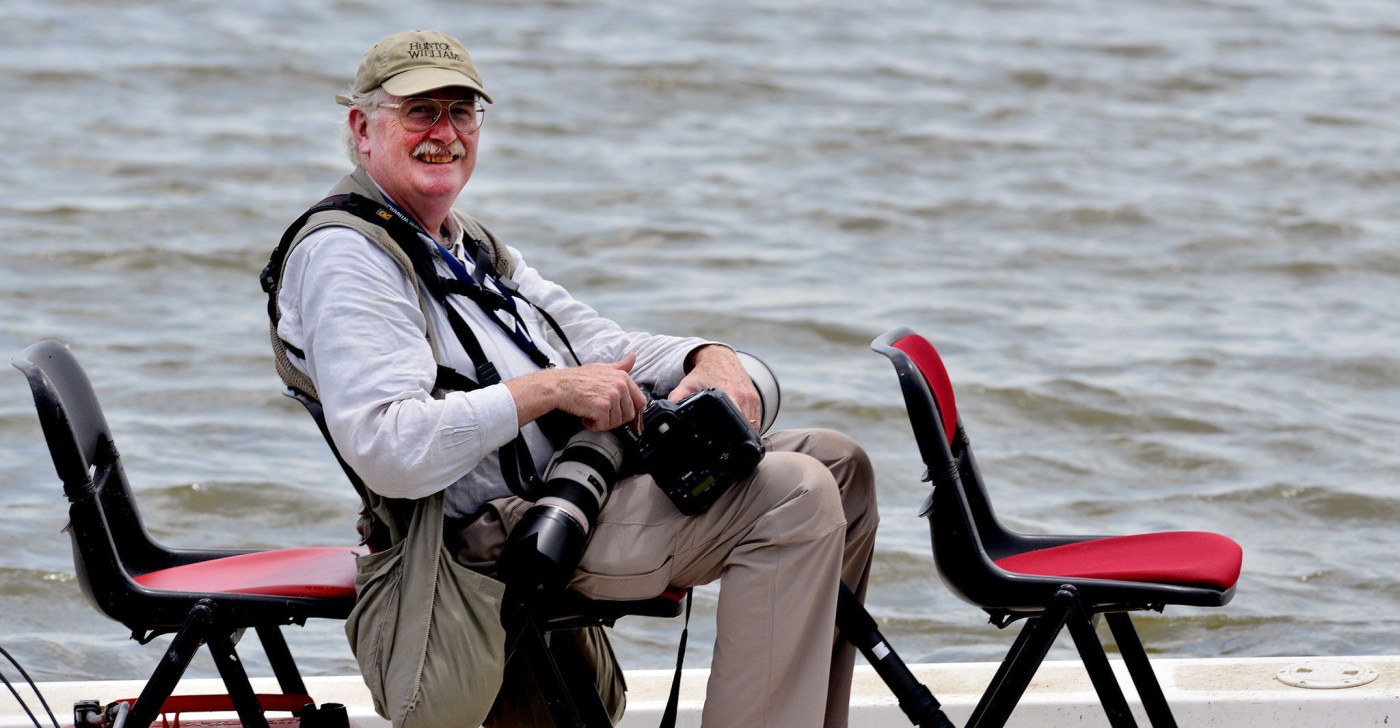 VA’s national rehabilitation events rely on thousands of volunteers each year to be successful, and Tom Connelly is one of nearly 5,000 volunteers who have collectively donated some 63,000 hours of service to the national events in 2019.

With two heavy duty cameras slung across his shoulders, sleeves rolled up and a ball cap pulled low across his face, one wouldn’t guess Connelly’s distinguished history of military service. A graduate of the U.S. Naval Academy, Connelly began shooting photographs in the early 1970’s when he was manager of the Naval Academy’s track and cross-country teams.

After graduating from the Academy he spent five years on two ships before the Navy sent him to law school.

Tom Connelly is a volunteer photographer at the National Veterans Wheelchair Games. He began volunteering at the Games in 2012.

With 28 years of service, Connelly retired as a rear admiral, and served as the Navy’s Assistant Judge Advocate General (Civil Law) at the pinnacle of his military career. After retiring from the Navy, he served as vice chancellor of the Catholic Archdiocese for the Military Services of the United States, and as general counsel for the Navy Federal Credit Union.

Today, Connelly works as a professional sports photographer for a number of college teams and tournaments, including competitions featuring Duke University, University of North Carolina, University of Virginia, and teams from the Ivy League and Atlantic 10 conferences.

But there’s one event he says he looks especially forward to each year. Since 2012, Connelly has donated his time and talents as a volunteer photographer at the National Veterans Wheelchair Games.

Photography can be an arduous job, he says. With events regularly happening throughout each day and night, and in multiple locations, he often spends long hours and travels on foot lugging heavy camera equipment.

“When the Games came to Richmond, they were right around the corner from me, and I volunteered. They assigned me some of the stuff that no one else wanted to do. I did that and I got hooked,” he says.

Now, every year, Connelly and his wife travel to the Games to support the event and the hundreds of Veterans that compete.

“It’s very humbling. The spirit of the athletes is great. The competition is fierce. And it’s a chance for me to give something back.”

Reflecting on his years volunteering at the Games, Connelly says his favorite part has been talking with the Veterans.

“I keep using the words, it’s ‘very humbling,’ because the athletes and their families have such great spirit. Adaptive sports is such a huge contributor to their rehab. You have combat vets, new folks, and people someplace in the middle and they are proud of what they do and they are there to compete.”

Army Veteran Johnnie Alexander throws the javelin at the 2017 National Veterans Wheelchair Games in Cincinnati. This photo from the Games was shot by Navy Veteran Tom Connelly. Connelly has been a volunteer photographer at the Games since 2012.

Author’s note: America celebrated National Volunteer Week April 19-25. On behalf of a grateful nation and VA’s adaptive sports and arts programs, we salute the men and women who serve our Veteran athletes and artists.