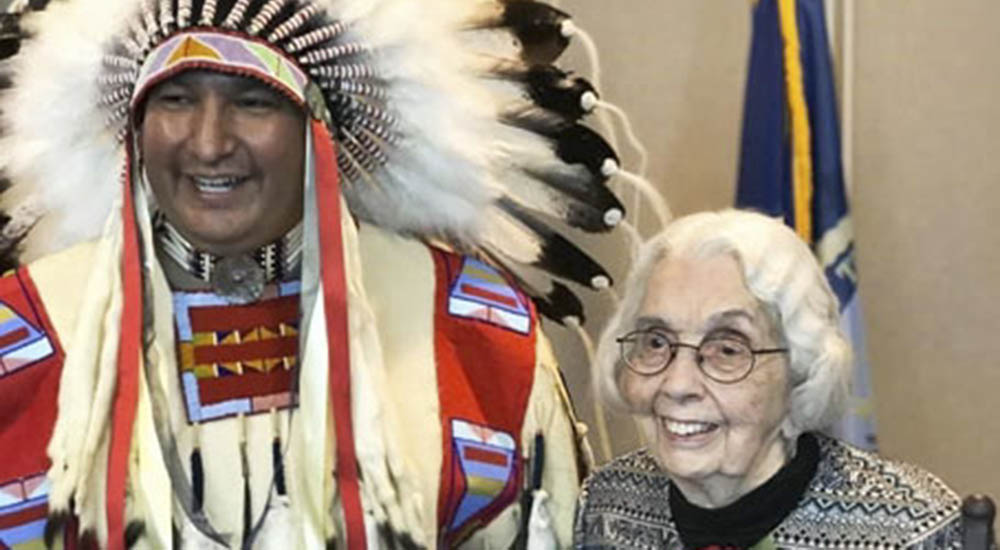 A.J. Not Afraid and a child performer attended the ceremony in traditional Crow Nation dress.

The beat of the Native American drums reverberated through the halls of the clinic as Crow Nation drummers proudly sang a war song. The ceremony began with a Crow Nation prayer and the presentation of colors.

Hundreds were on hand to witness the long-awaited renaming ceremony of the Billings clinics for World War II Veterans Dr. Joseph Medicine Crow, the last member of the Crow Tribe to become a war chief, and Benjamin Steele.

Shirley Steele beamed with pride while talking about her late husband. He was born and raised in Roundup, Mont., and joined the U.S. Army Air Corps in 1940. He was a Bataan Death March survivor and prisoner of war for more than three years. He died in September 2016 at the age of 98.

Tiara Medicine Crow, granddaughter of Joseph Medicine Crow, a Bronze Star holder, talked about her love of her grandfather and all that he meant to the Crow Nation.

A.J. Not Afraid, grandson-in-law of Joseph Medicine Crow and chairman of the Crow Nation, spoke to his history and accomplishments.

Joseph Medicine Crow was born on the Crow Indian Reservation in eastern Montana. He earned a master’s degree from the University of Southern California in 1939. Medicine Crow was the first member of his tribe to attain that level of education. Medicine Crow joined the U.S. Army in 1943. He received the Presidential Medal of Freedom for his service. He died in April of 2016 at the age of 102.

The photo at the top of this story is of Not Afraid and Shirley Steele.

MaryAnna Clemons is a public affairs officer with the Montana Health Care System.