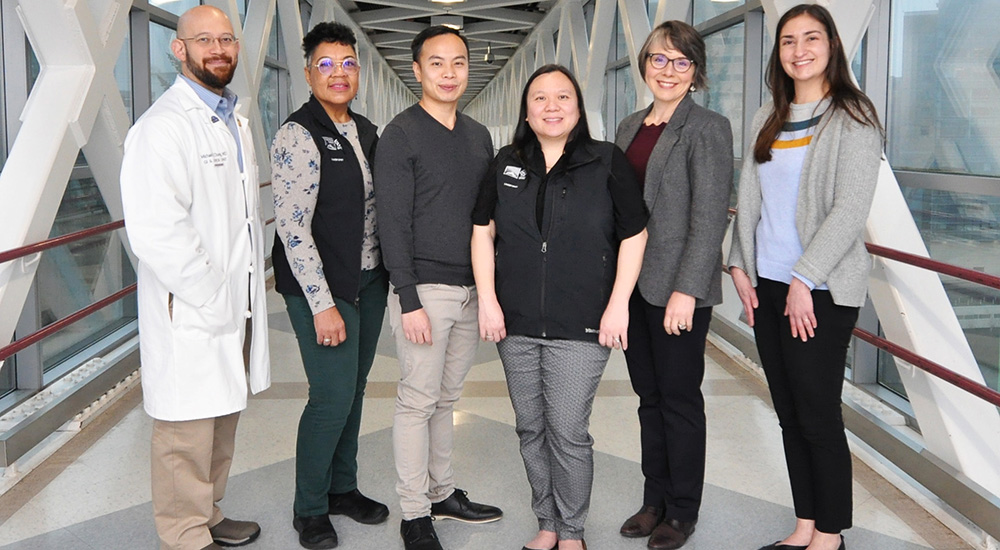 In 2004, Army Veteran Chris Mumford got upsetting news. During an emergency room visit for a lung infection, he tested positive for hepatitis C. Hep C is a viral infection that can lead to advanced liver disease, liver cancer and early death.

Mumford wasn’t a candidate for the drugs VA used to treat the disease in the early 2000s.

In 2016 — a decade after learning he had hepatitis C — Mumford received a letter from VA letting him know help was within reach.

“I was elated,” says Mumford, recalling his reaction when he got the word. Mumford is one of more than 100,000 Veterans who VA has cured of hepatitis C. The VA Portland Health Care System alone has cured more than 95% of infected Veterans within its population (nearly 2,200 people) between fiscal 2015 and 2019.

During that period, it also screened nearly 40,000 Veterans who are at high risk for the disease and hadn’t previously been tested.

More than 3 million people in the U.S. live with chronic hepatitis C, many of them Veterans. Just a few years ago, the prevalence of hepatitis C among Veterans was three times greater than the general U.S. population.

What has changed? A lot!

Many people infected with hepatitis C don’t know it, as was once the case for Mumford. The blood-borne virus often doesn’t have obvious symptoms until the onset of long-term complications.

What changed between when Mumford was diagnosed with hepatitis C and when he was treated for it? A lot.

Earlier hepatitis C treatments took longer (typically 48 weeks) and often had debilitating side effects. The cure rates were just 27% within VA and about 35% externally. VA began using direct-acting antivirals within days of their approval.

That wasn’t the only game-changer. Congress also allocated $2.5 billion for hepatitis C care within VA. The funding helped cover the cost of direct-acting antivirals and manpower to fight the disease. This meant VA Portland no longer had to prioritize the sickest Veterans for treatment of hepatitis C, says Do. Do is part of the hepatitis C team at VA Portland’s liver clinic.

Taking the treatment on the road

“Many of the Veterans we’ve treated appreciate that we got rid of a disease they thought they’d be living with for life. Or didn’t even know they had.” Do has worked with his colleagues to lower barriers to hepatitis C care for Veterans, many of whom live in remote areas.

Do and his colleagues have taken their services on the road. They travel to VA facilities across Oregon and in southwest Washington. Along the way, they provide care that was once only available at the Portland VA Medical Center.

The team works closely with VA mental health providers and programs that serve Veterans who are homeless or at risk of becoming homeless. They also help those struggling with substance-abuse issues. In some instances, team members have delivered medications to Veterans who faced difficulties in picking up prescriptions themselves.

Mumford in the all-Veteran band Got Your Six

“The objective is to meet Veterans in the community, meet their needs and link them to care,” says Stevens. She is part of a hepatitis C team that has forged connections to high-risk Veteran populations. This includes Veterans who are homeless or have substance-abuse issues.

For many Veterans, taking time off work for clinic visits or traveling long distances for care poses a hardship. The VA Portland hepatitis C team has also treated Veterans over the phone (after an initial in-person visit to a clinic) or via telehealth services.

“We’ve treated thousands of Veterans. We have a really good handle on what we need to do to treat them safely and effectively,” says Smothers. Smothers is a hepatology nurse care coordinator who leads the hepatitis C treatment campaign.

While he still has health issues, Mumford has one less thing to worry about these days.

“I can’t say hepatitis C ever really caused me a problem. My doctors were more concerned about what it might do to my liver eventually,” says Mumford. He’s part of an all-Veteran band called Got Your Six that supports Veterans’ causes.

Mumford urges Veterans to get tested for hep C.

“Go find out, if you haven’t been checked. The treatment is not hard to do,” says Mumford.

For more information on viral hepatitis and liver disease, as well as other resources, visit: https://www.hepatitis.va.gov/.

Anna Robaton-Winthrop is a public affairs volunteer with VA Portland.