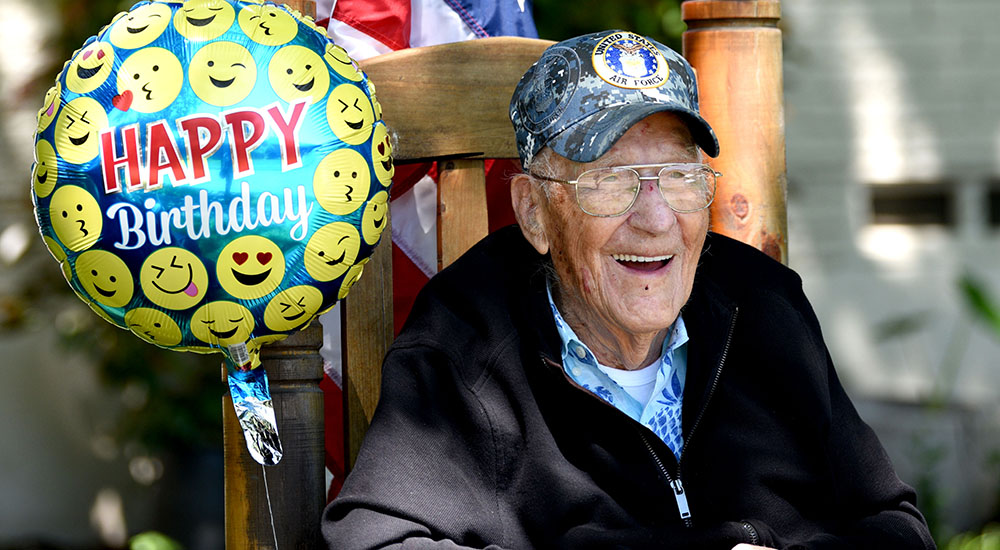 Fred Wills says he’s really only about 50-years old. The truth of the matter is that you have to multiply that number by two to get the real age of this World War II Air Force Veteran.

In celebration of “Mr. Fred”

Turning 100 is a special event and VA North Texas Health Care System employees thought Wills deserved recognition for this milestone. The staff coordinated a birthday car parade for Wills, who many know as Mr. Fred. The parade passed in front of his medical foster care home.

“So many fire trucks, police officers and other city officials and first responders came out to honor Mr. Fred,” said Dorothy Jackson, Wills’ medical foster home caregiver. “He knew nothing about it and was so excited.”

The birthday celebration didn’t end with the parade of emergency vehicles and sirens. Friends, neighbors, and employees from VA North Texas decorated their cars and surprised Wills with a second round of parade participants.

“We are here to celebrate Mr. Fred,” said Machanta Newson, medical foster home care coordinator for VA North Texas, Fort Worth. “He is one of our Veterans and we love him. We wanted to do something small and say thank you.”

Cara Hodges, VA North Texas recreation therapist, was one of the parade organizers and has worked with Wills for more than three years. Hodges wanted to properly honor Wills.

“Fred is one of the sweetest and most compassionate Veterans in our program,” said Hodges. “When I first got engaged, he demanded to meet my husband before marrying him so that I was in ‘good’ hands. He’s always looking out for everyone. I wanted to bring all these people who love him together to celebrate on such a momentous day.”

More than 30 cars drove by as Wills sat, waved and smiled.

“When you have good health, you have everything,” said Wills. “The only thing I don’t have is a girlfriend.”

In addition to the car parade, the staff collected more than 100 birthday cards for Wills. They also provided Wills’ favorite cupcakes and a few gifts.

“It’s always good to see people at happy occasions,” said Wills. “Life has been good to me.”

Jennifer A. Roy is a public affairs specialist for the North Texas VA Health Care System.