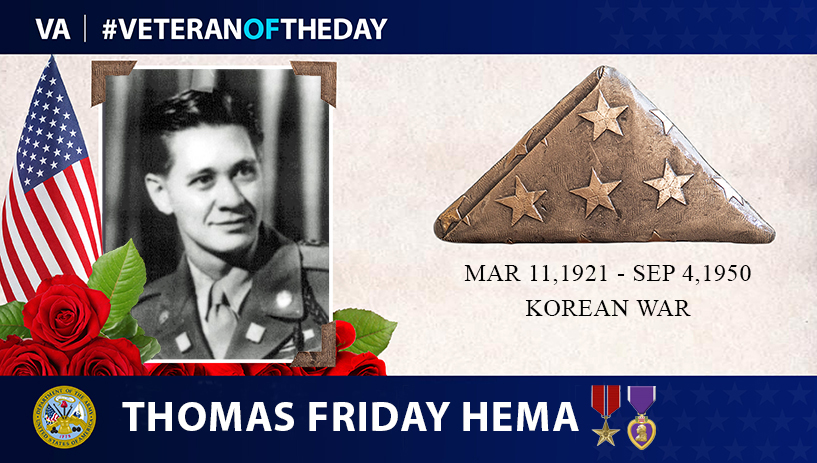 Thomas Friday Keahanui Hema was born in 1921. A native Hawaiian, he was the fourth of nine children and grew up on the island of Oahu. Growing up, he spent much of his time on the beach practicing the native Hawaiian sports of surfboarding and outrigger canoeing.

On Dec. 7, 1941, the Japanese bombed Pearl Harbor and other military facilities on Oahu. Life changed for all Honolulu residents as they lived under martial law.

Hema entered the Army Aug. 15, 1944, and completed basic training in Texas. In February 1945, he arrived in France to join Company A of the 399th Infantry Regiment, 100th Infantry Division,. The division was positioned south of Bitche, France, as part of the 7th Army during the Battle of the Bulge.

Hema’s battalion responded to a brutal attack on New Year’s Eve, assisted in the clearing of the Saarland Pocket, and captured Heilbronn after a bitter, nine-day battle.

In December 1945, Hema re-enlisted in the Army. He re-enlisted again in December 1948. At the outbreak of the Korean War, the 5th Regimental Combat Team, nicknamed the Hawaiian Regiment, deployed to Korea on the USS General Hugh J. Gaffey. It arrived in Pusan, South Korea, on the last day of July and joined the fight. According to Lt. Gen. Walton H. Walker, the defense of Pusan was a “stand or die” situation.

On Sept. 1, 1950, the North Koreans launched their last major offensive to overwhelm the Pusan Perimeter. By evening of the next day, Hema was killed by a bullet to the chest while defending his position on George Hill near Chingong-ni, South Korea.

For his actions, Hema received a Bronze Star and Purple Heart.

He is interred at the National Memorial of the Pacific, Section Q, Site 1353.