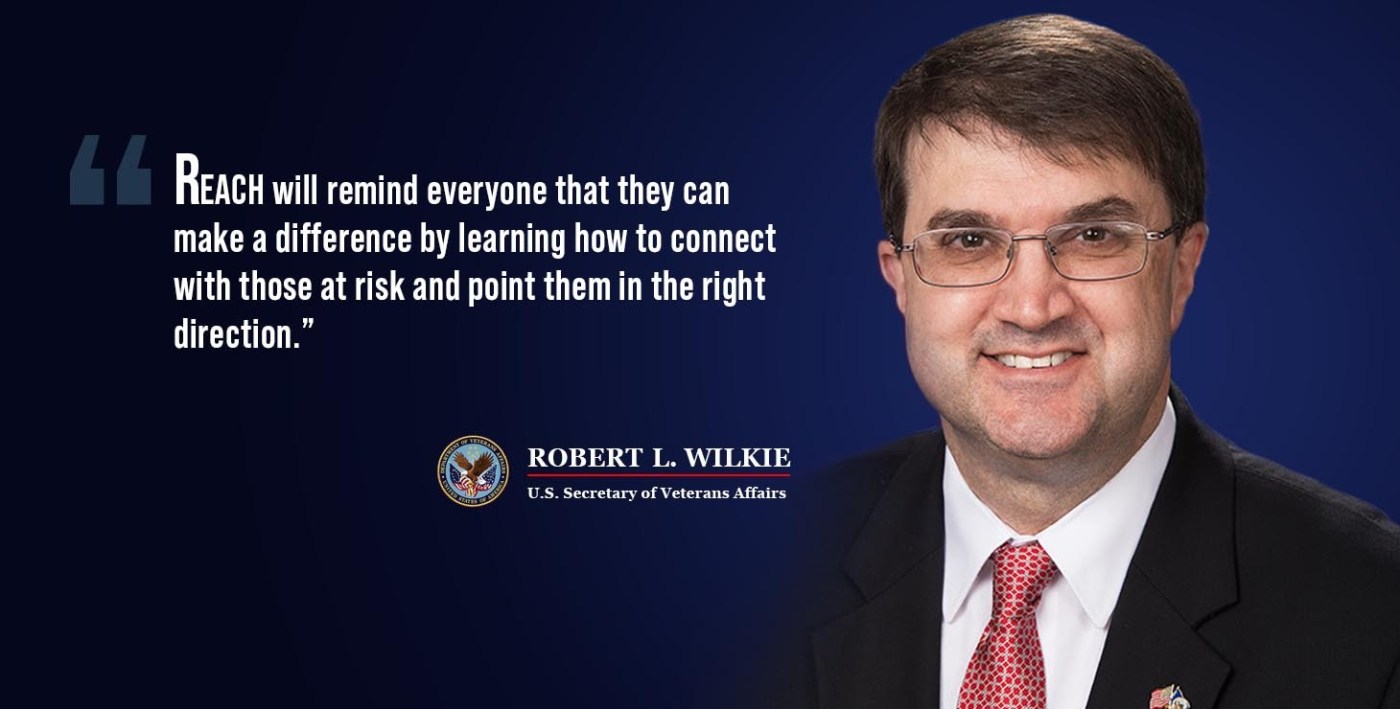 Reducing national suicide, including for Veterans, is the goal of a new REACH campaign, unveiled July 7 at the National Press Club in Washington, D.C.

The campaign’s mission is to educate all Americans that suicide is preventable and to encourage them to REACH to those in need to provide hope. It also encourages people who are hurting to REACH to find help. When people REACH, suicide will be prevented.

VA Secretary Robert Wilkie joined other senior governmental officials from The President’s Roadmap to Empower Veterans and End a National Tragedy of Suicide to launch the campaign.

During his remarks, Wilkie cited Korean War Veteran and Army Gen. Matthew Ridgway, who went to Korea during the war to restore confidence in the 8th Army. Ridgway’s goal was to motivate his men to continue fighting. Wilkie cited Ridgway’s memoir, where he said the fighting spirit of soldiers is rooted “in the individuals’ sense of security, of belonging to a unit that will stand by him.”

Wilkie also cited Ridgway’s observation the soldiers were vulnerable to feeling alone, something the new campaign seeks to overcome.

“Early intervention can help and connecting with people can give them a sense of belonging that keeps them in the fight,” the secretary said. “The effort Ridgway made in Korea is now the effort we must make here in America to end suicide.”

Wilkie said the new campaign is aimed at pointing people, including Veterans, in the right direction.

“That’s the purpose of the REACH campaign we’re launching here today,” Wilkie said. “REACH will remind everyone that they can make a difference by learning how to connect with those at risk and point them in the right direction. The PREVENTS initiative and this campaign is an attempt to change the culture of this country.”

The program centers on protective factors and also knowing the risk factors involved in suicide. According to PREVENTS Executive Director Dr. Barbara Van Dahlen, all of us have risk factors to some degree. Some common risk factors include  financial strain, chronic health concerns or pain, a prior suicide attempt, a history of mental illness, substance use and misuse challenges, access to lethal means, an overall sense of hopelessness, and recent loss such as the death of a loved one, divorce or loss of job. Protective factors include access to health and mental health care (including substance misuse treatment), sense of connectedness and belonging, satisfying interpersonal relationships, effective problem-solving skills, good physical health, financial security, and a sense of mission or purpose.

The campaign’s website is https://www.wearewithinreach.net and it uses the hashtag #REACHnow on social media.

“We are facing an epidemic of suicide,” said Second Lady Karen Pence, who is leading a national public-awareness campaign to prevent Veteran suicide. “But suicide is preventable.”

The PREVENTS roadmap, released on June 17, has 10 recommendations moving forward.

“Working together, I think we can implement this roadmap,” Pence said. “The mission is to save lives.”

“Our service members understand that they must look out for one other, on the battlefield, in the barracks and at home where the shared experiences unite all,” said Matthew Donovan, undersecretary of defense for Personnel and Readiness. “Every American can play a role in this fight to prevent suicide.”

The campaign also has a pledge people can sign:

I, Your Name, pledge to do my part to help change the national conversation around mental health and suicide by: