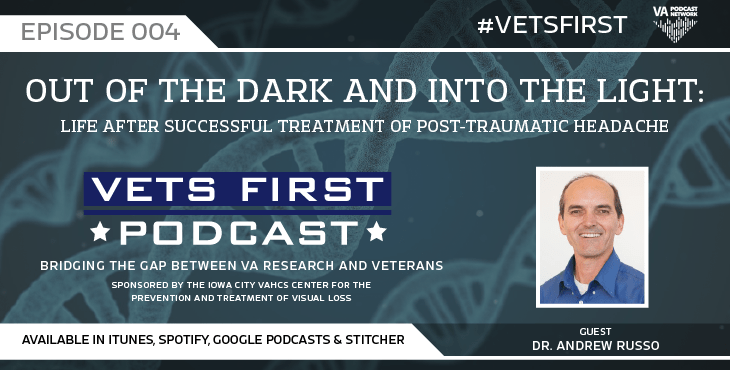 In this episode, an anonymous Veteran talks about her struggle with light sensitivity and headache after a traumatic brain injury.

She describes how she suffered daily headaches from 2013 until her first dose of a new anti-migraine drug in December 2018, which changed her life. During that period from 2013-2018, she experienced such severe light sensitivity that she had to wear sunglasses even indoors. Additionally, she experienced constant debilitating pain that significantly impacted her life. She recounts that after her first dose of this new anti-migraine drug, she sat on her bed in amazement. This was her first headache-free period of time in six years. She goes on to say how this treatment has impacted her life henceforth.

A visual presentation of traumatic brain injury can be found here.

In this episode, listeners also hear from an expert in the field of migraine and post-traumatic headache, Dr. Andrew Russo, a professor of physiology at the University of Iowa and director of animal research at the VA Center for the Prevention and Treatment of Visual Loss.

In a roundabout way, Russo became interested in migraine by watching how plants grow. Early in life weeding his grandmother’s garden, he learned how plants respond to light and their environment. He became curious how other organisms respond. Russo views migraine as a brain responding too much to a stimulus like light, sound, touch, etc. Primarily, his studies focusing on a peptide in migraine known as CGRP and its actions helped Russo contribute to a new class of anti-migraine drugs that have shown success in treating migraine.

Russo’s father served in the Navy and received his primary care through the VA healthcare system. He said he was impressed with the VA’s commitment to treat Veterans not only in the hospital setting but in all walks of life. He branched into researching traumatic brain injury and post-traumatic headache because the similarities to migraine as well as a moral obligation to support Veterans.

CLICK HERE to read the full transcripts from this episode.