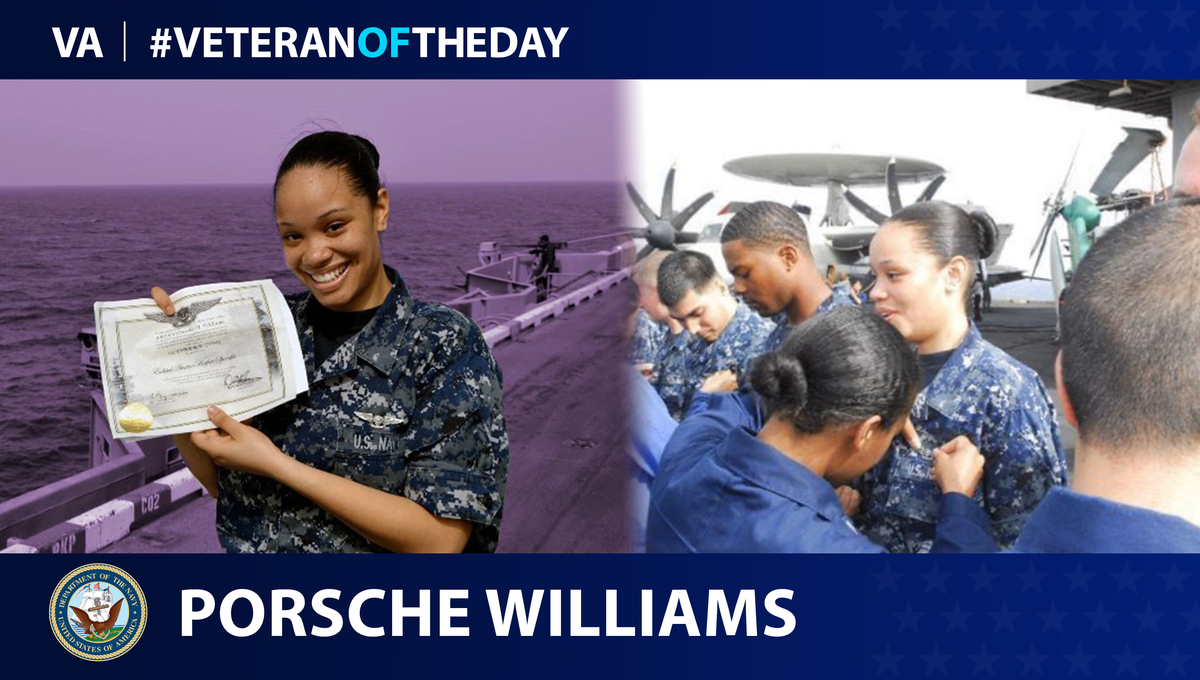 Today’s #VeteranOfTheDay is Navy Veteran Porsche Williams, who served as an aviation boatswain’s mate during Operations Iraqi and Enduring Freedom.

Porsche Williams comes from a military family; her father served in the Air Force while her stepfather was in the Army. In 2008, Williams decided to enlist in the Navy to support her newborn son.

Following basic training, Williams became an aviation boatswain’s mate fuels. This job works in the refueling of naval aircraft on ships and the operating and repairing of purging and protective systems. Williams served two deployments on the USS Theodore Roosevelt and the USS Enterprise during Operations Iraqi Freedom and Enduring Freedom. She worked in the V-5 Division in the Navy Air Department, regulating the ship’s firefighting equipment and serving as a member of the In-port Emergency Team. Additionally, Williams took Air and Surface Warfare training while deployed, which qualified her to become an enlisted aviation warfare specialist. Williams honorably discharged from the Navy in 2012.

After traumatic experiences in the military, Williams struggled to transition following her service. She attended Prince George’s Community College in Largo, Maryland, and started work in the U.S. Patent and Trademark Office, but continually dealt with depression. Williams began attending therapy at the Washington D.C. Veterans Affairs Medical Center and became inspired to help others like herself.

Williams founded the nonprofit Veterans organization Heroes House DC, now known as the Restore Life Foundation, based on her experiences with homelessness. The organization serves homeless Veterans in the Washington, D.C., area. By offering transitional housing and workforce support, the foundation aims to give homeless Veterans the tools needed to support themselves and their families after serving. Williams wanted her organization to cover the many aspects of suicide prevention, such as peer and person-to-person suicide intervention, staff coaching, and education on the prevention of suicide across the country.

In addition to her work with Restore Life, Williams is an active member of the Veterans Mental Health Advisory Council at the Washington, D.C., Veterans Affairs Medical Center.