Twenty years a Veteran, 30 years as doctor to Veterans 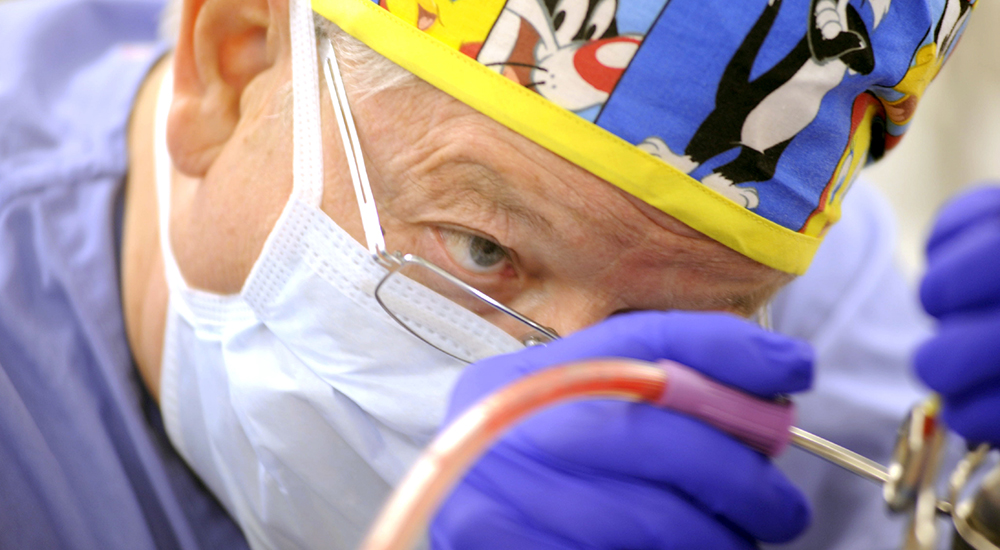 I was an ROTC scholarship student in the ‘60s, when Vietnam was cranking up. I had an Air Force scholarship to medical school, graduating in ‘73. I got an internship at Wilford Hall in San Antonio, a big Air Force hospital, and decided I wanted to pursue the ear, nose and throat specialty. During my residency at Yale, I spent lots of time at the VA hospital.

In 1978, I finished my residency and went to Travis Air Force Base in California. There, I was a chief for five years. I lived on base six minutes from bed to ICU by bicycle. I was extremely busy doing all kinds of surgeries.

In 1983, I went to Germany, where I spent three years north of the Rhein River. Former VA Secretary Bob McDonald was in the Army at the time, as a junior officer in the Fulda Gap in Germany. In 1985, I was chief of triage at the winter Reforger exercise.

Marines’ reaction to their hymn changed his life

One of my biggest impressions was a life-changing experience that made me want to spend the rest of my life caring for active duty and Veterans.

In the spring of ‘83, I was sent to Camp Bullis, outside San Antonio, for field training. Experienced Marines were our instructors, most of them with long-range recon experience in Vietnam.

On the final day, we were all sitting on bleachers waiting for graduation. Martial music was playing before the festivities began and when they played the Air Force Hymn, we clapped. But then at the very first bars of the Marine Hymn, the Marines all stood at attention. Instantly, everyone else jumped up and stood at attention, too. There was not a dry eye among us.

After spending a week with Marines in the field, we developed an appreciation for their total commitment to Corps and country. We had never experienced that before. That shaped my career.

After that, I was not interested in leaving the military or going into private practice.

In 1990, I retired from the Air Force and began my VA career immediately. I was recruited to VA Pittsburgh specifically to head the ENT service.

Veterans’ experiences are still vivid to them

I was acting chief of surgery from ’99 to 2001 and had a part in quite a few innovations. Another doctor and I introduced time out and site marking in Pittsburgh before it became a standard across VA and in The Joint Commission.

I’ve realized over the years that the military changes Veterans forever. I had a patient on the phone who had been in the missile program during the Cuban missile crisis in 1962. He told me stories about his experience that were as vivid to him now as they were in 1963, probably.

I used to think war wounds were things you could operate on and fix, but after seeing multiple Veterans with PTSD, I learned that war and combat wounds are much more than physical. Many of those we care for are, in fact, wounded by their experience. Care should be provided to all Veterans regardless of how they served and when.

Eibling: “People work at VA because they want to take care of Veterans.”

What do Vets need more than anything else? Health care. They need care that extends beyond going to a clinic or seeing their doctor. They also need care for their PTSD. Care for homelessness. I can’t even list all the different types of care our Veterans need. It’s clear VA does that job better than anybody else.

I spent 50 years in health care: 20 on active duty and 30 in VA. And I would not do anything differently. I’m a strong proponent of military and VA health care and I’ve elected to stay in VA, and in Pittsburgh, I might add, for the last 30 years to do what I enjoy doing. The people who work at VA work here because they want to take care of Veterans. It’s more than a job. It is a calling. I very much appreciate the commitment and dedication of the people I work with.

You can be sure the physicians caring for you have your best interest at heart. It’s not a billable moment. I’ve seen patents sent to community care who have asked to come back to VA. They go so far as to say, “I will wait for an appointment because I want care at VA.”

Here’s his full story on Pittsburgh VA’s “Meet the Staff Mondays” on YouTube: