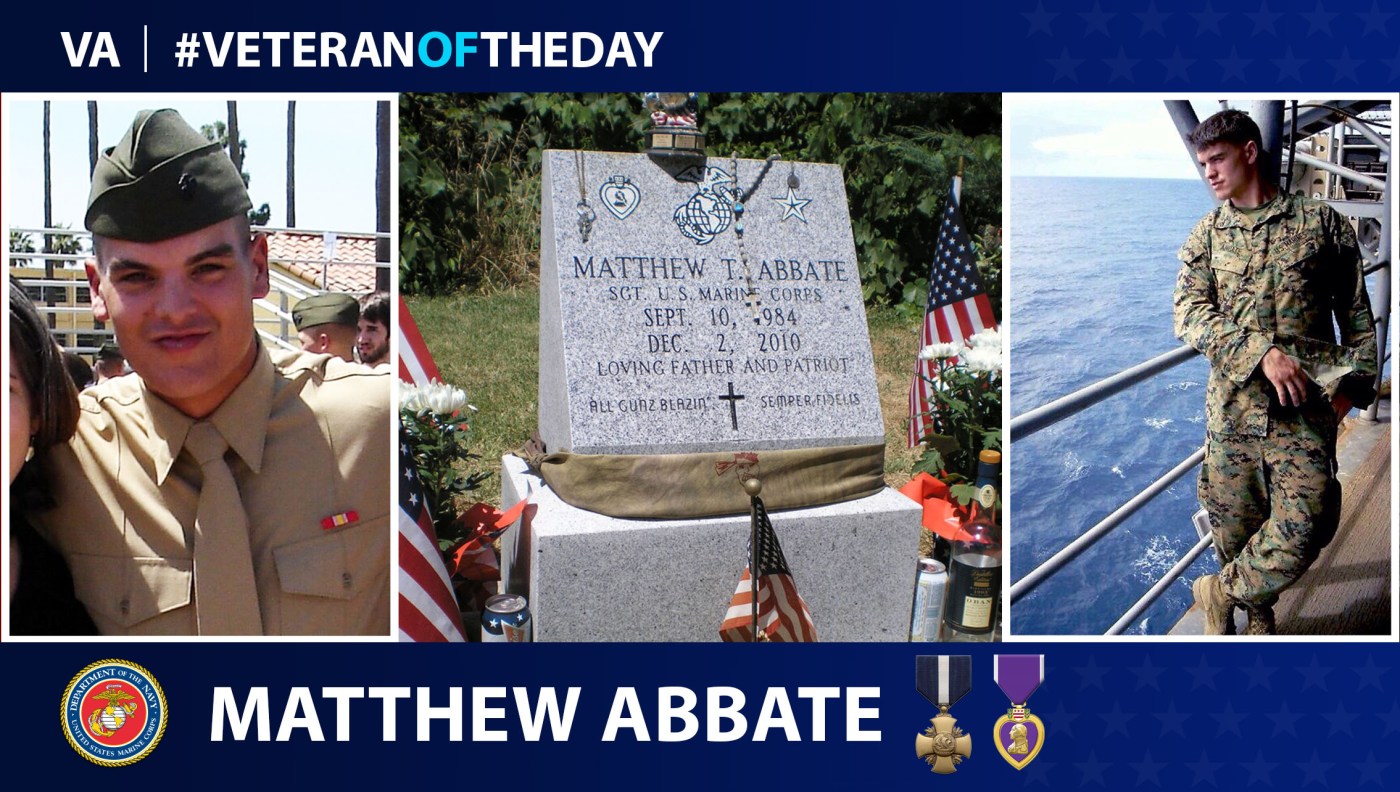 On the Marine Corps birthday, today’s #VeteranOfTheDay is Marine Corps Veteran Matthew Thomas Abbate, who received a Navy Cross for actions in Afghanistan.

Matthew Thomas Abbate was born September 1984 and raised in Fresno, California. He graduated from Sierra Charter High and enlisted in the Marine Corps in 2006.

He was a member of the “Darkhorse,” 3rd Battalion, 5th Marines Regiment, 1st Marine Division, I Marine Expeditionary Force based at Camp Pendleton, California. Abbate served three tours of duty in Iraq, Japan and Afghanistan, where he was killed in action Dec. 2, 2010.

Two months prior, Abbate’s sniper section was accompanying a squad of Marines on foot patrol in the Sangin River Valley. As they patrolled orchards and fields, enemy insurgents opened fire on their position to lure them into an unswept minefield. Almost instantly, improvised explosive devices detonated, injuring two Marines and a Navy corpsman. The blast incapacitated the patrol leader. Abbate recognized and took charge of the situation, running into the unswept minefield and drawing enemy fire as he rallied the disoriented survivors. Completely exposed, Abbate personally suppressed the enemy and directed the remaining squad members’ fire.

After coordinating a medical evacuation while the casualties received urgent aid, Abbate swept the landing zone for mines until enemy fire again forced the squad to take cover. Knowing the urgency of rapid evacuation for the critically wounded, Abbate once again rallied the squad and led a counterattack that cleared the landing zone of hostiles, allowing for a helicopter evacuation. He received a Navy Cross for his actions that day.

Abbate received fatal wounds two months later when another Marine patrol, pinned down by enemy fire, called in a coalition airstrike. The combination of the airstrike fragments and enemy explosives killed him.

Survivors described Abbate as being “the perfect Marine.” In addition to the Navy Cross, Abbate received a Purple Heart, Navy and Marine Corps Achievement Medal, National Defense Service Medal and other medals.