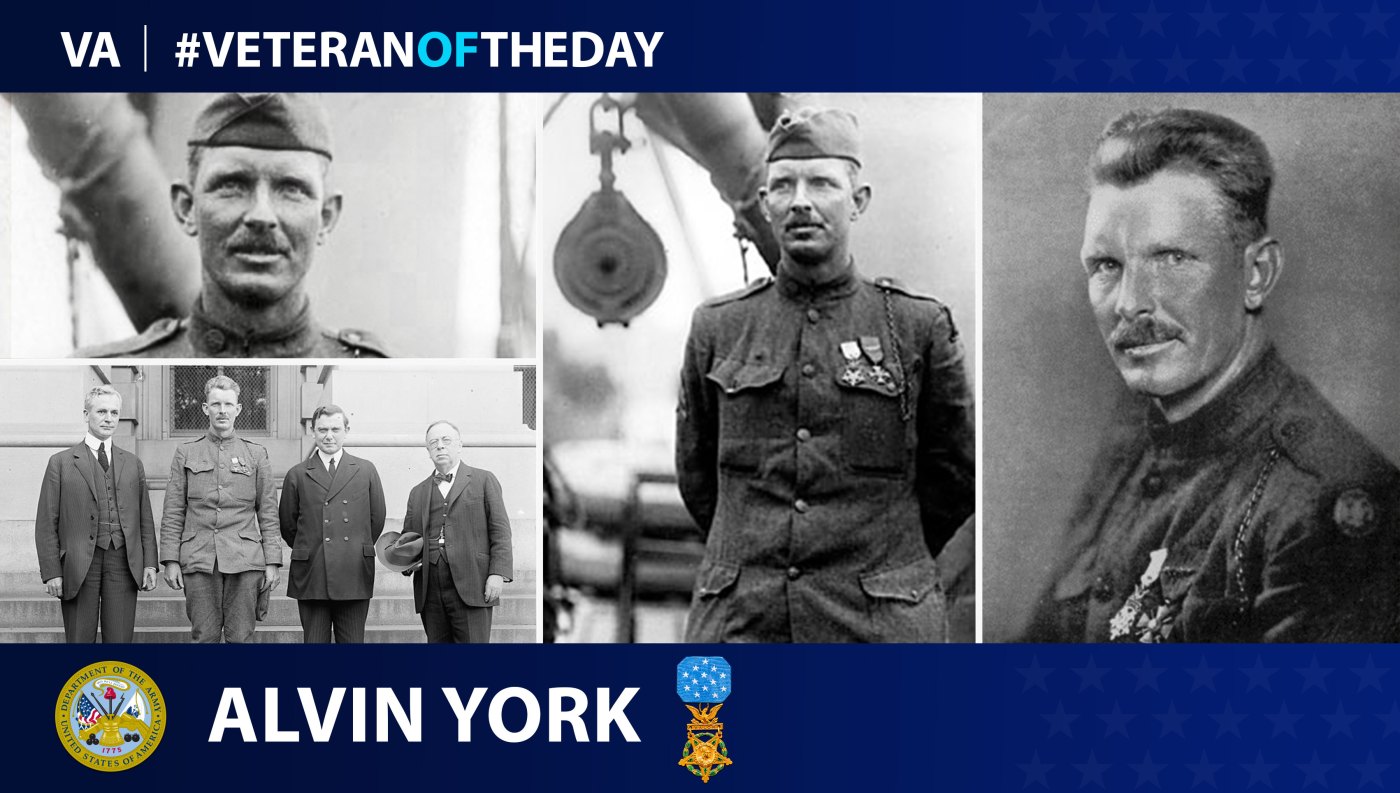 On the anniversary of his Medal of Honor action, today’s #VeteranOfTheDay is Army Veteran Alvin Cullum York, who fought during the Meuse-Argonne offensive.

Alvin York was born in 1887 in a log cabin in the Indian Creek area of Fentress County, Tennessee. The third of eleven children, York’s family was impoverished. York only attended school for a total of nine months, spending most of his time at home, hunting, fishing, and farming to sustain the family. In 1911, York’s father passed away, prompting him to take up jobs in railroad construction and logging to support his mother and younger siblings.

When the United States entered World War I in 1917 and drafted York, he claimed conscientious objector status to get around his obligation to fight. York’s appeal was denied and he was sent to Camp Gordon, Georgia, for training. York later committed to fulfilling his duties as a soldier after having a revelation.

The American Expeditionary Force arrived in France in the summer of 1918, and York served with Company G, 328th Infantry Regiment, 82nd Infantry Division. In the midst of the Meuse-Argonne Offensive Oct. 8, 1918, York’s battalion aimed to capture German positions on Hill 223 along the Decauville rail-line north of Chatel-Chéhéry, France.

Seventeen soldiers, including now-Corporal York, infiltrated the German lines to take out machine guns. The group overran a German headquarters. Unfortunately, the men read the area map wrong and wound up far behind enemy lines. German machine gun fire suddenly peppered the area, killing six soldiers and wounding three others. York then took charge of the seven remaining soldiers. While his men remained under cover, guarding the prisoners, York worked his way into position and began engaging the German machine guns.

As York avoided the machine guns, six German soldiers in a nearby trench charged him with fixed bayonets. York had no rounds left in his M1917 Enfield rifle, but drew his M1911 pistol and shot all six soldiers before they reached him.

A German commander present at the battle emptied his pistol trying to kill York but completely missed. Seeing mounting German losses, the commander surrendered the unit to York.

York reported to his brigade commander, Brig. Gen. Julian Robert Lindsey, who said, “Well York, I hear you have captured the whole damn German army.” York replied “No sir. I got only 132.”

The Army presented York the Distinguished Service Cross and promoted him to sergeant. His award was later upgraded to a Medal of Honor. He eventually received nearly 50 decorations from numerous nations, such as the French Republic and Montenegro.

After the war, York returned home as a hero. But he was not interested in profiting off his experiences. York used his prestige to improve roads, employment, and education in the United States. During the Second World War, York attempted to re-enlist, but given his advanced age and poor health, he instead commissioned as a major in the Army Signal Corps and went on bond tours and recruitment drives. Though York achieved the rank of major, and then colonel with the 7th Regiment of the Tennessee State Guard, newspapers never stopped referring to him as “Sergeant York.”

York passed away at the Veterans hospital in Nashville, Tennessee, Sept. 2, 1964.