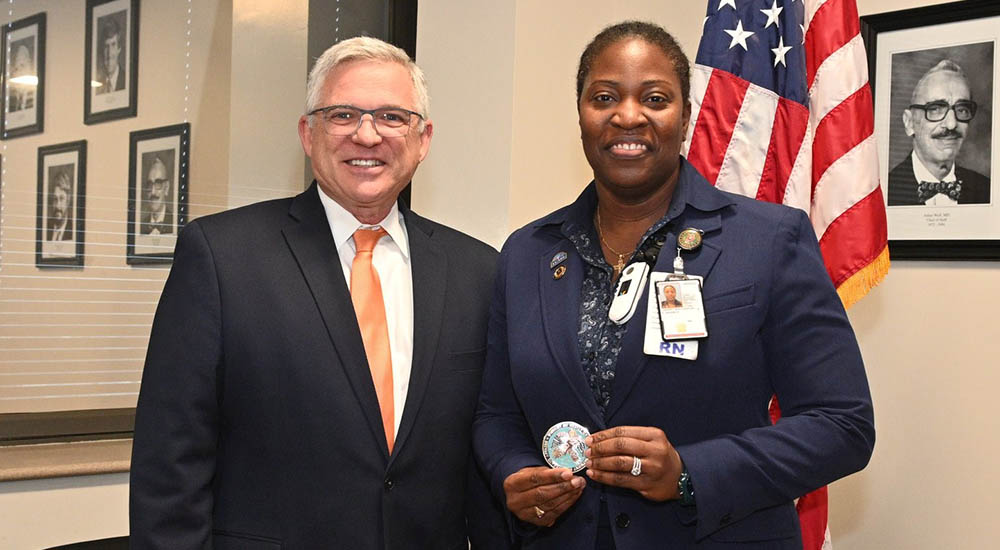 Maxine Lindsay-Shillingford is a U.S. Army Veteran and a registered nurse who serves as the director of nursing for perioperative service at the James J. Peters VA Medical Center in the Bronx, New York City. When she faced COVID-19 symptoms that threatened to overwhelm her, two things helped her stay afloat: her faith and her VA telehealth nurse.

When the dizziness, headaches, and eye pain made it impossible for Lindsay-Shillingford to read, she recited scripture in her head. But it was the second thing that helped her persevere: Joanna Sainvil, the VA telehealth nurse who was part of the VA care team that monitored her remotely as she recovered from COVID-19 at home.

“The VA telehealth program really saved my life, because every single day, I had someone who was checking on me,” Lindsay-Shillingford said. “Joanna checked on my symptoms and encouraged me through my feelings of helplessness and depressive episodes. She was really that connection, that bridge, between my home and the world.”

“One of the Scariest Times of My Life”

In late March, as COVID-19 cases were surging in New York City, Lindsay-Shillingford was working in the hospital recovery room. On Saturday, March 28, she began to feel unwell.

“I came into work that Monday — because I don’t miss work — but Monday is really when it all went downhill. It was as if a 5-ton truck hit me. I had pain everywhere, fatigue, and was starting to run a temperature.”

Lindsay-Shillingford was enrolled in VA’s Remote Patient Monitoring – Home Telehealth (RPM – HT) program for COVID-19 patients. Through RPM – HT, Veterans can use telehealth technologies to regularly send health measures to their VA care teams from home. Soon after Lindsay-Shillingford’s diagnosis, Sainvil began to call multiple times a week to check in and take her vital signs.

Lindsay-Shillingford’s symptoms worsened. She lost her appetite and developed chest pains, fever, and neurological issues that made it difficult for her to move. When her husband Samuel became sick too, Lindsay-Shillingford’s feelings of helplessness and anxiety intensified. But Sainvil was there to support her.

“I am a young woman who is used to being at work and taking care of my house and my husband. So this felt like I was driving on the highway and suddenly the engine in my car just died,” Lindsay-Shillingford said. “It doesn’t matter who you are. When you’re that ill and you feel so helpless, it’s not a good place to be by yourself.

“Joanna saved my life because she was able to walk me through it and encourage me. She listened to me, she was nonjudgmental, and we could talk about anything.”

Looking Out for a Friend

Sainvil said her calls with Lindsay-Shillingford grew from caring for a patient to looking out for a new friend.

“She’s a nurse — a very accomplished nurse — but you can tell that she never thought that this would happen to her,” said Sainvil. “As I kept calling, a friendship developed. I know she enjoyed me checking in and just being able to talk to someone.”

Sainvil started working as a telehealth care coordinator in 2014. She said VA telehealth has gained new importance as a tool for treating COVID-19 patients like Lindsay-Shillingford.

“RPM – HT helps doctors become aware of issues before they become emergencies, which prevents hospitalizations,” Sainvil said. “Veterans who are being monitored for COVID-19 from home are not dying because we can recognize their symptoms and intervene sooner.

“Before COVID-19, people didn’t always give telehealth a lot of credit. I feel like telehealth is finally getting the recognition it deserves.”

“Even after my discharge, we continued to talk, because she was my support system,” Lindsay-Shillingford said. “Out of telehealth, we built a trusting relationship that goes way beyond a typical nurse-patient relationship, because she extended herself to make sure that I was OK.”

Although Lindsay-Shillingford and Sainvil have never met in person, Sainvil said she deeply appreciates the relationship they developed through telehealth.

“Maxine would say, ‘I really look forward to hearing your voice.’ I have patients that I will never forget, and she’s one of them.”

Back to the Front Lines

In the photo above, Dr. Richard Stone, VHA executive in charge, awards a challenge coin to Maxine Lindsay-Shillingford in January 2020.

Now recovered, Lindsay-Shillingford is back to what she says is her life’s work: service to others.

She first felt a spiritual call to nursing when she was a three-year-old growing up in Jamaica. After coming to the United States, she decided to serve her country. As a U.S. Army nurse, she completed multiple overseas tours. She then moved on to caring for her fellow Veterans as a VA nurse.

Lindsay-Shillingford has returned to work at the JJP Bronx VAMC. “I feel thankful that God has given me another chance, another opportunity, to continue my spiritual work of taking care of my fellow humans,” she said.

“It felt great when Maxine got to go back to work, because she does a lot for the Bronx VA,” said Sainvil. “She’s very busy, she does her job well, and she’s back to what she loves doing.”

Meanwhile, Sainvil has taken a new position as an emergency room nurse outside the VA health system. Although she enjoys the opportunity to treat patients in person, she said she gained an even greater appreciation of telehealth’s impact after treating Lindsay-Shillingford.

“Sometimes telehealth nurses don’t realize the impact of what we do,” said Sainvil. “Telehealth is a different type of nursing, but it’s still nursing. Even though we’re not really hands-on, we’re still doing great things for our patients, for our nation’s Veterans.”

Treva Lutes is the communications lead for the VHA Office of Connected Care.