Despite the risk, VA nurse answers the call 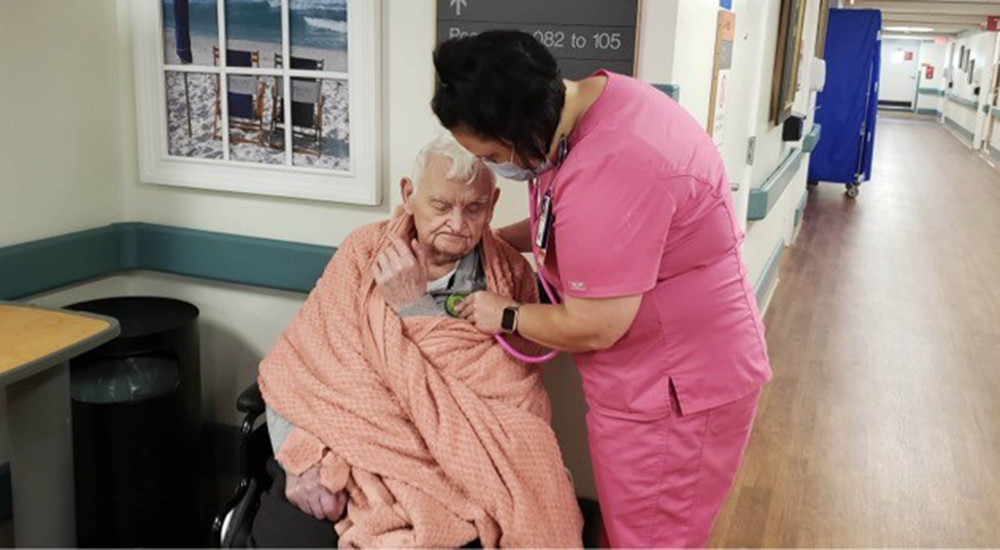 Nurse Brandi McAtee works at a VA hospital, taking care of the men and women who have served our nation. Like the Veterans she cares for, McAtee, too, has experience serving others selflessly.

Raised in a small town of less than 500, McAtee hadn’t traveled a great deal in her life. She’d focused on her family and community and enjoyed her career as a nurse, working not far from her hometown. “I’m not much for adventuring. I’m not that brave,” she says with a laugh.

About five years ago, McAtee put her fears aside and stepped out of her comfort zone to go to Haiti as part of a mission trip. Staying in something akin to a military bunker, she spent her days working with a traveling clinic, providing health care services as part of a team. “People would walk for miles and wait for hours — without complaining or arguing with each other — just to be seen by a health care professional,” McAtee marvels. “We don’t realize how good we have it here.”

It had been her first experience on an airplane. In early June 2020, she was about to have her second, but the plane ride was not the most courageous part of her trip.

McAtee embarked on a volunteer assignment working at a Maryland state Veterans’ home where 31 of her 33 patients were positive for COVID-19.

DEMPS is the Veterans Health Administration’s main deployment program for clinical and non-clinical staff to an emergency or disaster for internal VA needs or for missions following a presidential disaster declaration.

When disasters – such as hurricanes, earthquakes and floods – occur and state and local resources are overwhelmed, states may request federal assistance through the Federal Emergency Management Agency (FEMA), which may reach out to VA.

McAtee thought, “Why not?” and signed up to participate. Three years passed.

McAtee’s medical center was fortunate. Well-planned safety precautions and strict enforcement of protocols meant her long-term care ward was largely unaffected by the virus. Because of careful, conservative practices, they had the supplies and the staff they needed and the patients remained virus-free.

Others were not so lucky. As cases grew and state resources were taxed, appeals for help began to roll in at the national level. Suddenly, McAtee’s expertise was requested elsewhere.

She got the word she would be leaving about three days before her flight was to depart. “My mom was not happy,” McAtee says ruefully. “She was very concerned for my safety. I told her, ‘This is my passion, and my purpose — this is what I’m supposed to do.’” She left for Maryland on June 10, bound for the Charlotte’s Hall Veterans Home.

“The whole thing was extremely well-organized. I was ready to start work the very next day and I was impressed at how smoothly things had gone.”

Many of the Veterans’ home caregivers had contracted the disease, and the facility was dangerously short-staffed. Teams of DEMPS clinicians had been sent to help on temporary assignments and McAtee was with the third team to cycle through. VA employees from Marion, Illinois; Walla Walla, Washington; and Washington, D.C., were part of her diverse group.

McAtee served as charge nurse during her shifts, completing patient assessments, skin audits, entering chart notes and supervising other staff as they performed their duties.

Unlike VA, the facility did not have a bar code scanning system, so identification of residents was problematic. “At first, we didn’t know the patients, and many of them didn’t know who they were either. So, we had to rely on permanent staff until we got to know the Veterans.”

But get to know them, they did. It wasn’t long before they built relationships with the residents that will remain with them for years to come. “This is always more than just a job. The Veterans matter to us. I really enjoyed Frank. A very nice man, he always wanted you to come in and sit down and visit with him. He’d say, ‘If you guys need anything, just let me know.’”

Though McAtee had traveled with the supplies she needed, such as proper personal protective equipment (PPE), on a national basis, supplies were limited, and the Veterans’ home felt the pinch. Staff worked to improvise while still meeting safety standards. “It made me think about how glad I am to work for VA,” McAtee remembers. “We always have what we need to care for our Veterans.”

A nurse with no regrets

Asked if she was fearful when she accepted the assignment, McAtee says she wasn’t. “You get the sense that you’re doing something. You’re helping. Besides, thanks to our medical center, I had everything I needed and I never felt unsafe. I really have to commend the ones who managed this process.”

Though her service in this capacity meant enduring multiple tests for COVID-19 (“I’ve been swabbed five times so far.”), McAtee says the opportunity to help was worth it.