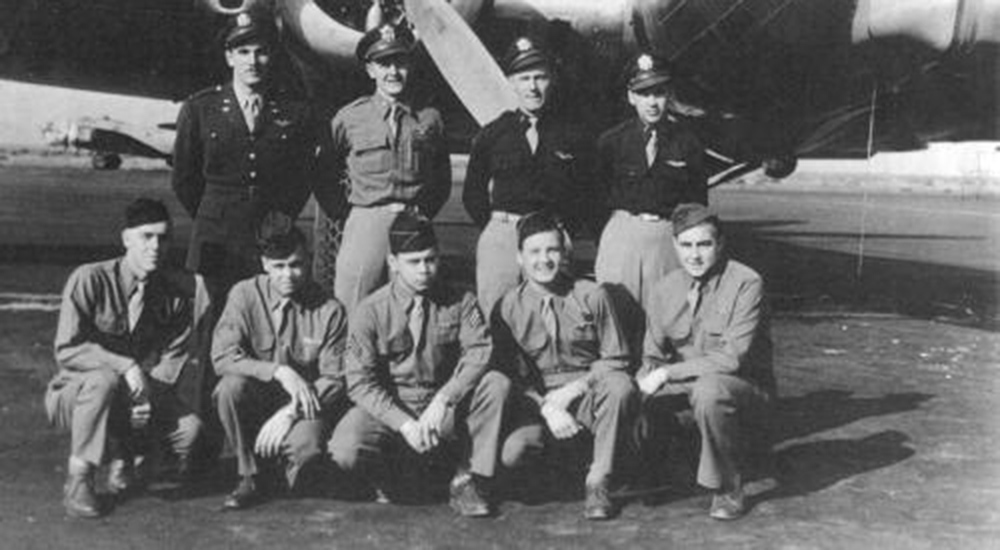 On Feb. 3, 1945, 19-year-old Ralph Kalberloh found himself serving in the Army Air Corps. He was a tail gunner on the B-17 Flying Fortress, “Dixie’s Delight.” Kalberloh’s plane was part of an air armada of more than 2,000 bombers and fighters lumbering toward Berlin.

In the photo above, Kalberloh is kneeling, second from right, with the crew of Dixie’s Delight.

After spending more than eight hours crammed in the tail section of his plane, the tall, lanky farm kid from Hardin, Missouri, had arrived over the most heavily defended German target in Europe.

“We lost our first engine over Berlin. We lost another on our way to Hamburg which was our exit point from enemy territory. From there, we were supposed to fly over the North Sea on our way back to our base in England. Then we lost a third engine directly over Hamburg from flak, so we were down to just one engine at that point.”

As the heavily damaged plane began to lose altitude over the frigid water, the pilot had no choice but to reverse course and head back over Germany so that the nine-man crew could bail out over land. Kalberloh explained that a person could only expect to live approximately 30 minutes in the North Sea because of the water’s extremely cold temperature.

Six feet tall – had to crawl out

“In a B-17, the tail section is very tight. To get out of the plane I had to crawl out because I was six feet tall. When the order came to bail out, I took off so fast I didn’t even unplug my oxygen mask, I just tore it off the wall. When I got to the center of the plane where all the other guys were, I bailed out through the waist door.”

As he landed, Kalberloh’s parachute became entangled in the top of a tall tree. The momentum of his body and the tension of the chute’s suspension lines as he bounced up and down caused the branch to break. He dropped to the ground ― alone in enemy territory without food, water or a map.

Kalberloh had just completed his first and last bombing mission.

After five days without eating and the possibility of being captured by more aggressive German troops in the area, such as the SS, Kalberloh surrendered to the constable of a small town and officially became a prisoner of war (POW).

“We owe a debt of gratitude to our Veterans that never can be repaid,” said Patricia Hall, medical center director of Harry S. Truman Memorial Veterans’ Hospital in Columbia, Missouri. “However, those who experienced unimaginable hardships as prisoners of war and those who remain missing must be recognized ― not just for their sacrifice and bravery, but also for their dedication to our nation. I ask everyone to take time this Sept. 18, to honor these American heroes by remembering what they did for this country.”

Following his surrender, Kalberloh eventually was sent to Stalag VII-A, Germany’s largest POW camp of the Second World War. Located north of Moosburg, a town in Bavaria, there were more than 76,000 allied prisoners in the main camp (and another 40,000 in nearby labor camps) when it was liberated on April 29, 1945.

General Patton saluted us as he drove by

“Each one of those POW camps had a main street that ran down the middle of them. On that day, two tanks from the Third Army, with a jeep between them, came through the front gate and down that street. In the jeep was General George Patton. As he drove by, he saluted us.”

After returning to the U.S., Kalberloh married and had a child. He lost his first wife of 50 years to a heart attack. Kalberloh since has remarried. He and his current wife Barbara have been married for 25 years. They reside in Jefferson City, Missouri.

At 95 years old, an emotional Kalberloh explained how he felt that day in 1945 when he was liberated. “I cried,” he said through tears. “I was so happy. I’m sorry for crying. It was the happiest day of my life.”

The staff at Truman VA remembers the sacrifice and service of Ralph Kalberloh and all others who served as POWs or remain missing. Additionally, we thank all our Veterans for their service.