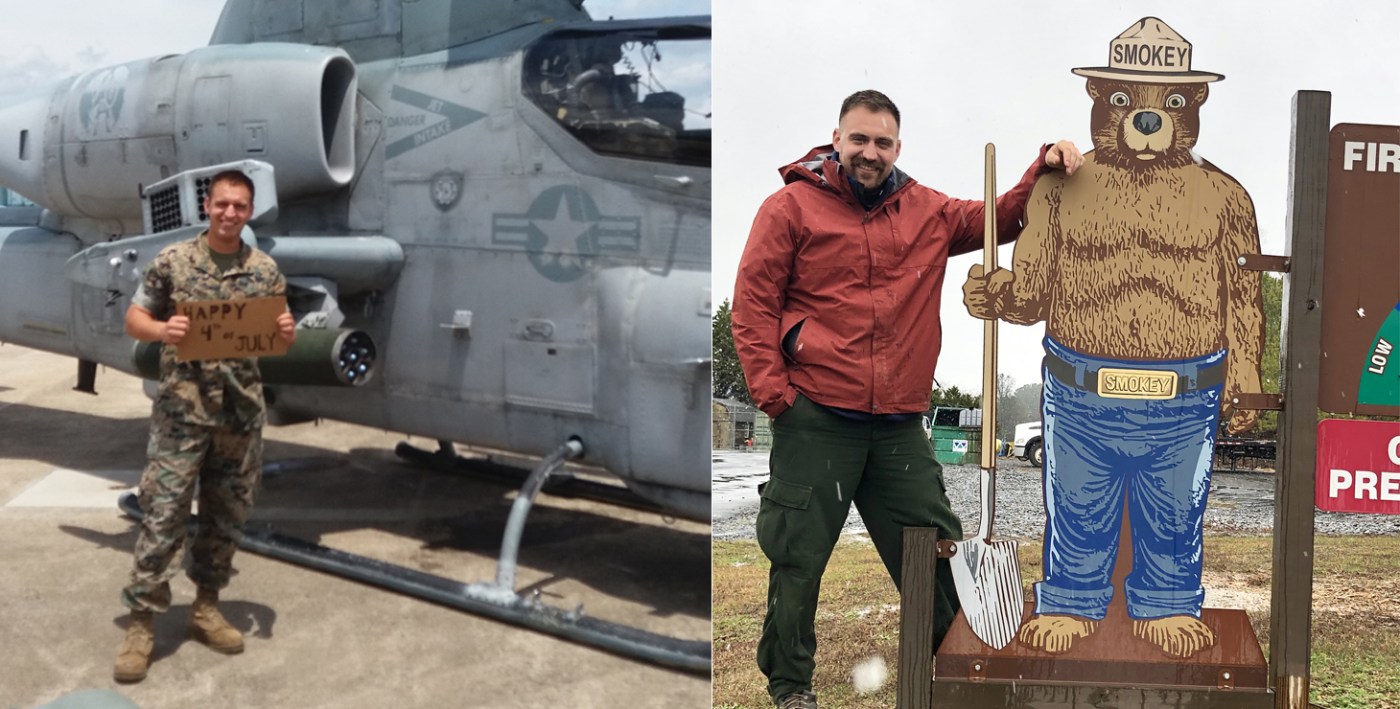 Post-9/11 Veterans looking to find a new team have a unique opportunity through the Southeast Conservation Corps Veterans Fire Corps.

SECC started the Veterans Fire Corps program in 2018. The 10-month intensive training program engages recent-era military Veterans up to age 35 in fuels reduction, fuels management, and wildland firefighting. The current program is now open and runs Jan. 10, 2021 – Oct. 8, 2021. This includes 31 weeks of AmeriCorps time, eight weeks of administrative work, and one week of paid time off.

From Marine to firefighter

Jonathan Bolanos is one of those Veterans. He joined the Marine Corps in 2015 as an aviation ordnance specialist, loading bombs on aircraft. He served at Stationed in Camp Mujuk in South Korea and Marine Corps Air Station Miramar in San Diego. Bolanos also deployed with the 13th Marine Expeditionary Unit through Asia and the Middle East. He returned in March 2019 and separated in May 2019.

Following his service, he spent time with family and traveled to South America. He found a job at a family-owned ammunition distribution center, but wanted a job like his Marine Corps experience.

“I was in such a structured environment,” Bolanos said. “I knew I wanted to do something outdoors and not sit behind a desk.”

Bolanos originally applied to SECC as a crew member clearing trails, but learned about Veterans Fire Corps. After learning about the mission, he knew he found a program that matched his previous service.

“The transition is great, especially for Marines or other service members coming out of the service who don’t have a transferrable skill,” he said. “I came from a fast-paced deployment mindset to a fast-paced fire-paced fire mindset.”

He said one of the major benefits is working alongside fellow Veterans.

“It was good having that support network through SECC,” he said. “The biggest takeaway is SECC offers such an in-depth program for fire catered to Veterans that we get so many training courses and on-the-job training for firefighting.”

He said his work and experience helped land him a federal job in New Castle, Virginia. He is now serving with an engine crew serving George Washington and Jefferson National Forests, starting Oct. 4. He said his time spent with SECC, where he deployed to Colorado, Kansas and Oklahoma to fight fires helped him land his job

“The experience I got fighting fires out West helped me greatly,” he said. “It’s much like a deployment and pretty exhilarating. You build a lot of unit cohesion. It’s a lot like the cohesion in the military.”

He encouraged other Veterans to apply—and stay humble.

“Embrace the work ethic you have in the military and bring it to fire,” he said. “You will go a long way. You’re learning back from the bottom. It’s a very humbling experience. You have to be humble.”

VFC crewmembers can earn certifications related to fuels management. This includes courses on firefighting, wildland fires, chainsaws, incident management, first aid and CPR. Southeast National Forests use VFC, which facilitates opportunities for crew members to work across a variety of districts and landscapes while simultaneously assisting forests with a myriad of fuels related needs.

Home base for VFC crews is the Conasauga Ranger District of the Chattahoochee-Oconee National Forest in Georgia.

Some projects require members to work five days at a time with two days off. Other projects require camping and living on project locations for 8-14 days, with a set amount of days off. Members cannot use drugs or alcohol during work related travel at any time.

In addition to a stipend, members receive paid trainings and certifications and an education award upon program completion. Members also receive food and accommodations during overnight travel and transportation to and from work sites.