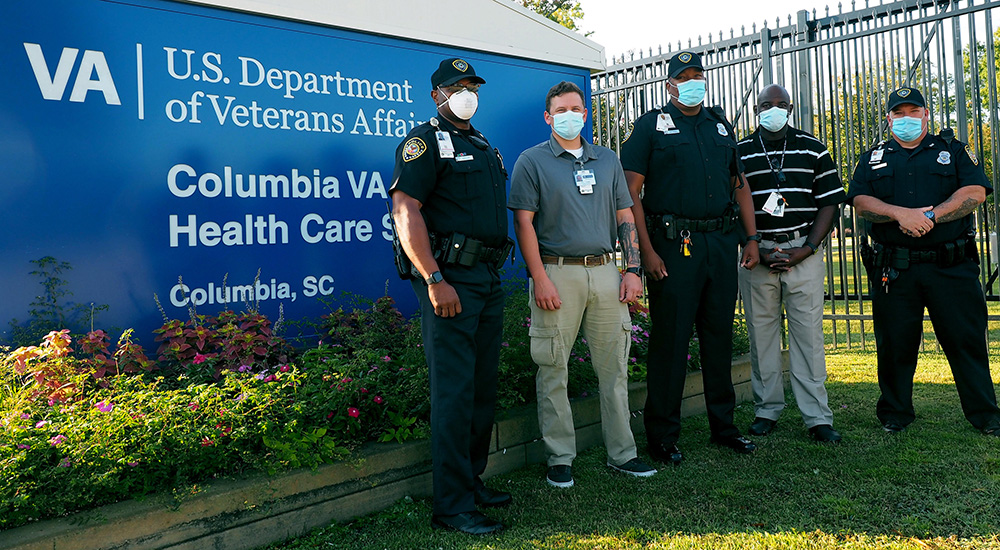 Two ladies are alive today thanks to the quick action of five police officers from the Columbia VA Health Care System.

On Oct. 5, Columbia VA Police officers Major Calvin Rascoe and officers Colt Clark, Ronald Turner, Robert Evans and Shawn Bethea were returning to the Columbia VA from training. Rascoe observed fire and smoke coming from a vehicle traveling north on Interstate-77. The driver and passenger were unaware of the fire coming from the undercarriage of their car.

Rascoe activated his vehicle’s blue lights and siren to get the driver’s attention to pull over. The police officers quickly jumped into action to save the two ladies in the car.

Clark and Turner led the ladies to a safe area away from the car. Turner called 911 to request fire and emergency rescue and Bethea took care of traffic control.

Took three extinguishers to put out the fire

With flames still blazing from the undercarriage, Rascoe grabbed a third fire extinguisher and finally extinguished the fire just as the Lexington Fire Department and local Emergency Management Service arrived on the scene.

“Our focus was to save the two ladies in that burning car,” Rascoe said. “I appreciate these guys 100 percent. They did an impeccable job. They reacted and did what they are trained to do to make sure people are safe. I believe if God had not placed us there at that particular moment, the outcome would have been tragic.”

David Omura, Columbia VA Health Care System director, said “The heroic work our great police service does inspires me. I hope that if I am ever driving down the road and I have an emergency, like my car being unexpectedly on fire, the VA Police are there to save the day.”