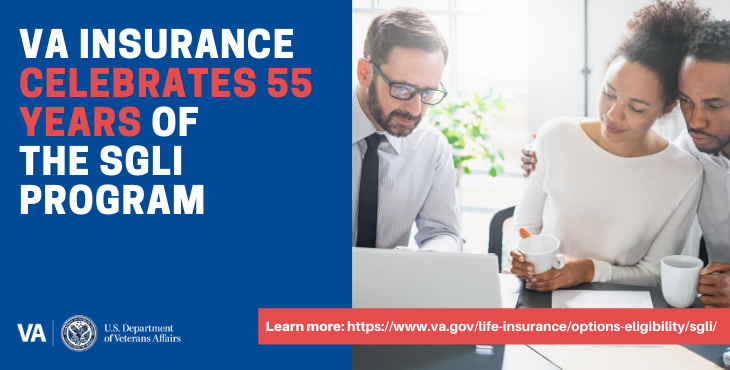 It was on Sept. 29, 1965, during the Vietnam War, when an act by the U.S. Congress created the program. SGLI addressed life insurance needs for service members in combat zones and for other purposes.

VA first purchased a group policy from the Prudential Insurance Company of America in 1965 and, since then, the partnership and programs administered have grown to support millions who have served.

There are several significant SGLI milestones achieved over the years that have made a difference. Some of those milestones include:

In 1974, VA introduced the Veterans’ Group Life Insurance (VGLI) program to allow service members to convert their SGLI into a five-year term policy; in 1992, VGLI became renewable beyond the original five-year coverage period. In 2001, the Family SGLI program began insuring spouses and children of service members, and in 2005 a rider added to SGLI started Traumatic Injury Protection (TSGLI).

“For 55 years, the SGLI program has honored our heroes for their service to the nation with quality performance,” said Daniel Keenaghan, Executive Director, VA Insurance Service. “I look forward to VA Insurance and Prudential building on this solid foundation to ensure SGLI performance exceeds expectations for value, timeliness and customer service.”

The VA Insurance Service also collaborated with the Defense Manpower Data Center (DMDC) to update the milConnect website to increase visibility of the Servicemembers’ Group Life Insurance Online Enrollment System (SOES) application which saves time and frustration while reducing barriers for those in service to get benefits they have earned.

Today, there are 5.1 million individuals insured for $1.2 trillion of total coverage under the SGLI family of programs, and these programs will continue for future service members, Veterans, and military families.

Shawn Graham is a public affairs specialist in VBA’s Office of Strategic Engagement.